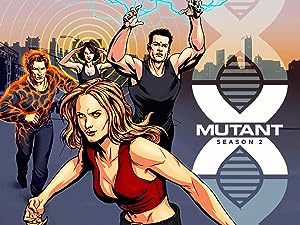 (106)
2003TV-14
MUTANT X chronicles the adventures of a team of human mutants possessing extraordinary powers as a result of genetic engineering. Like hundreds of other unsuspecting subjects, these new mutants were altered in secret experiments conducted in a covert government project.

Richard A.Reviewed in the United States on April 3, 2018
4.0 out of 5 stars
A Wonderful Show That Is Better on Blu Ray - But, No Extras
Verified purchase
When this show came out, I had caught the tail end of the 1st Season and didn't know that the show had continued. A few years ago, I came across the DVD set and watched all three Seasons. Season 1 and 2 were definitely my favorites. I had watched the DVDs SO much that they wouldn't work anymore. I bought this Blu Ray and am VERY happy. The picture and sound are vivid. Unfortunately, the extras that were included with the DVD are not to be found on the Blu-Ray. This is unfortunate because the DVD included bloopers and cut scenes. It also included the history/science behind the mutants and their powers.

As for the show, the actors, and their characters, had a chemistry that couldn't be beat. However, Season 3 was a little disappointing. It appears that the writers were attempting to insert a new character that would be able to "hit the ground running." Unfortunately, she comes across as arrogant, obnoxious and petulant. And by Season 3, Episode 5, I just wanted the character to die.

With all of that being said, I love the show and am sad that it ended.
11 people found this helpful

Lee The KingReviewed in the United States on November 10, 2018
5.0 out of 5 stars
We are Mutant X!
Verified purchase
I watched most of this series back in the 90's when it was televised in my viewing area as part of a Saturday afternoon action programming block which included shows such as Xena, Hercules, Andromeda, Cleopatra 2525, The Beastmaster, Earth: Final Conflict etc. I always thought it was an interesting show especially because it's essentially a slightly different take on the X-men universe. I'm aware that in the past this show has appeared on DVD. The first incarnation was multiple DVD sets with a few episodes each that were released by the now defunct AD Vision company. I never purchased those in part because I don't think they ever completed releasing the series and I always wanted a complete box set. When I saw this Blu-ray release of the complete series on Amazon, region free, and for a good price, I jumped on it. I've only watched a few episodes thus far, but it's just as I remember back in the day. The episodes look absolutely stunning on Blu-ray and you get the complete series. If you're a fan of this show, then I would highly recommend this purchase.
2 people found this helpful

Joseph McCoyReviewed in the United States on March 4, 2018
5.0 out of 5 stars
Affordable, plays on u.s. blu-ray players and good picture quality
Verified purchase
I loved this series and was thrilled when I found the whole series on amazon at an affordable price but I was skeptical wether it would be playablue on my blu ray player and also about picture quality but when I received and watched it I found that I worried for nothing it played with no problem and the picture quality was great
12 people found this helpful

Jarrod SextonReviewed in the United States on April 11, 2019
5.0 out of 5 stars
It's good an yes works great an good show too!
Verified purchase
It is amazing an beautiful everything works good an fabulous love it I had no issues with it... it came nice an clean an yes it had no damages on the discs sets an so on... it was worth it to get an I'm happy with this season it's a good show too! :)
4 people found this helpful

RachelReviewed in the United States on December 20, 2019
5.0 out of 5 stars
Decent box set
Verified purchase
I loved the show when it first aired, and once I saw the set was available again on blu Ray, I had to snag it. I really enjoy that you can just select one episode, and it keeps playing on to the next, without having to go back to the menu, even if you select the second or third episode to start.
One person found this helpful

Steven AndersonReviewed in the United States on July 27, 2019
4.0 out of 5 stars
Very good Sci Fi for its time
Verified purchase
I collect Sci Fi Movies and TV shows. If you like Victoria Pratt. You'll like this show.
One person found this helpful

D. BagwellReviewed in the United States on March 30, 2020
5.0 out of 5 stars
A very under rated TV series.
Verified purchase
One of the first superhero shows that benefited from CGI well worth a look
One person found this helpful

Erika H.Reviewed in the United States on October 4, 2018
5.0 out of 5 stars
Mutant x
Verified purchase
Video & sound quality is good.
2 people found this helpful
See all reviews
Back to top
Get to Know Us
Make Money with Us
Amazon Payment Products
Let Us Help You
EnglishChoose a language for shopping. United StatesChoose a country/region for shopping.
© 1996-2021, Amazon.com, Inc. or its affiliates