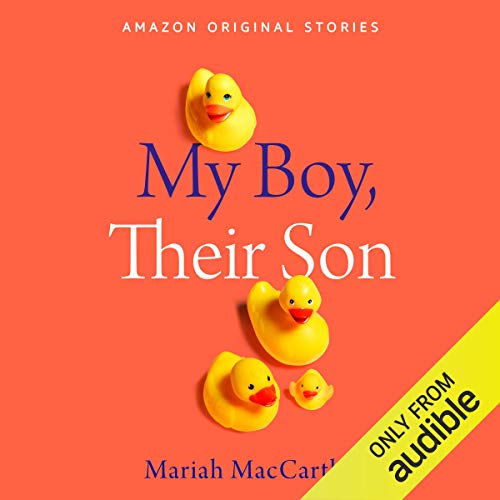 My Boy, Their Son

It was Mariah’s worst choice - and the best decision.

As open adoptions go, it’s a dream scenario. But that doesn’t make saying goodbye any easier. From the hit true storytelling podcast RISK! comes a beautiful and heart-aching memoir of a mother’s love.

Mariah MacCarthy was a financially strapped playwright in Queens with two roommates. Nothing about that situation said Let’s add a baby to this. Nine months later, having Leo adopted by two gay dads was the most loving solution possible. All Mariah fears now is becoming a stranger. But as four lives are irrevocably changed, Mariah discovers that embracing the moment of farewell is just the beginning of a family story, by turns joyous and devastating.

Enjoy this audiobook free + more
Learn more about Membership
List Price: $1.99
You Save: $0.25 (13%)
By completing your purchase, you agree to Audible’s Conditions Of Use
Sold and delivered by Audible, an Amazon company

AH
5.0 out of 5 stars Excellent very short novel
Reviewed in the United States on May 9, 2019
Verified Purchase
I appreciated the author’s candid, sometimes gritty style of writing. She’s honest, positive, and real in telling about the open adoption of her son to a gay couple. Definitely worth reading as an adoptive parent or someone thinking about adopting out their child.
Read more
7 people found this helpful
Helpful
Report abuse

Leslie
3.0 out of 5 stars Interesting story but very short
Reviewed in the United States on July 13, 2019
Verified Purchase
It was a good, interesting story but I expected a longer book and more of a story. I do commend any woman who admits up front she is not suited to raise a child and gives the baby up for adoption.
Read more
One person found this helpful
Helpful
Report abuse

Susan Albright
1.0 out of 5 stars Waste of money
Reviewed in the United States on January 18, 2020
Verified Purchase
There wasn’t much to the story. Read the entire thing in under a half hour.
Read more
2 people found this helpful
Helpful
Report abuse

Amazon Shopper
5.0 out of 5 stars Extremely Thoughtful and Excellent Quick Read
Reviewed in the United States on May 14, 2019
I chose to read this story because I saw it was only 22 pages long and I had a quick gap of time I needed to fill. I thought it would be some heartwarming little thing that might have a sadly touching moment or two but then I'd move on. But I found myself profoundly moved by this story and on the verge of tears more than once (I'm a crier though, so most people probably won't need the Kleenex).

Some people might be offended by the variety of "controversial" topics this short story contains: queerness, Judaism, interracial relationships, Planned Parenthood, same-sex parents--and I hope those people won't find this little gem and leave bad reviews. The story opens with a compelling scene that draws you right in, and was frankly much better than I expected. I think this story packed such an emotional punch for me because I have a small son who is the absolute center of my world, and at every turn I kept imagining myself in the author's position, and my son in the position of the child the author placed for adoption.

This story is eye opening about the perspective of the birth mother. I tended to think of open adoption as the ultimate happy ending of a story--the child has 2 adoptive parents, the birth mother gets to stay involved from a respectful distance, the child benefits, instant Disney ending. But the author was raw and honest about the ways that the grief of watching someone else raise your child is never-ending, it just evolves. I'm glad I read this.
Read more
13 people found this helpful
Helpful
Report abuse

Kevin G. Allison
5.0 out of 5 stars What's It Like to Give Birth and Then Give the Baby to Adopting Parents?
Reviewed in the United States on May 8, 2019
This is such a surprising, sweet, and moving true story. There will be several moments that bring tears to your eyes. Full disclosure, I gave Mariah notes on a much earlier draft of this story, but I'm still blown away by it. You'll fall in love with all of the characters. Giving birth is such an emotional rollercoaster. But giving birth and then going through the open adoption process with another family comes with all sorts of different emotional surprises. Mariah makes for an amazing narrator, full of heart and honesty.
Read more
12 people found this helpful
Helpful
Report abuse

Blabbernackle
2.0 out of 5 stars This is a thirty page confessional
Reviewed in the United States on May 21, 2019
I did not notice this was not a full book but a few paragraphs. Ramblings from a young and her thoughts. Not even a story. I guess it gave me a little insight into one person's experience with an open adoption. I guess I don't really care.
The use of the plural pronoun to describe an individual is awkward and basically stupid in my mind. But the author felt she, er excuse me, they, are "queer". Even stranger considering this person gave birth and identifies as a mother. Haha.
Read more
6 people found this helpful
Helpful
Report abuse

Monique Pearson
5.0 out of 5 stars I always wondered....
Reviewed in the United States on May 13, 2019
As a teen in college I had a pregnancy "scare" and immediately went through how the different options before me might play out; mostly how I'd feel after whatever decision I'd make if I were pregnant. Open adoption seemed like torture, but less torture than never knowing. This story gave me some clarity on those sometimes revisited agonizing days before I discovered I was NOT pregnant, but instead had mono. In fact, I'm now 46 and I have never been able to conceive at all. I'd take the "torture" of open adoption over that even after reading this heartfelt story.
Read more
5 people found this helpful
Helpful
Report abuse
See all reviews

Lynn
5.0 out of 5 stars ..
Reviewed in Canada on July 13, 2019
Verified Purchase
It was a great book.
Read more
Report abuse
See all reviews