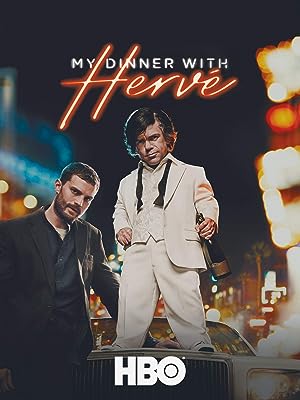 My Dinner with Herve

MA MarshallReviewed in the United States on October 27, 2018
4.0 out of 5 stars
Fascinating Story On and Offscreen
Verified purchase
This movie has a lot of good things to say, and the fact that it was a passion project for its star and its writer/director is apparent. Peter Dinklage may not look much like the real Herve, but he nails the accent and mannerisms exceptionally well and gives a truly layered performance. It's also really moving that Gervasi finally kept his promise to tell Herve's story. Some of the fictional stuff created for Danny Tate (Gervasi's avatar) feels a little mawkish and unnecessary but it's certainly the best work I've seen Jamie Dornan do. I saw the film with someone who is too young to even know who Herve was or have heard of Fantasy Island, and she found the story very compelling. In fact, I think not having any baggage about the title character probably makes the film even more interesting.

Herve had a lot of problems, and he wasn't always the nicest person but the movie doesn't shy away from that. It does however really show how fame can destroy a person and become an albatross, especially if they are physically different.

Ray CorrieaReviewed in the United States on July 3, 2020
3.0 out of 5 stars
A Short, Formal Review
Verified purchase
Before I even knew about this film, I only knew about his role from the James Bond movie, and he was a dwarf. Following its premiere, I began to learn more about him. Several facts were captivating, while others were just pure heartbreaking. Anyways, once I read about the project being in development, it was something that I was willing to watch. I had no thoughts on what it was going to convey, either an important message or just for entertainment because it stars one of the principal actors from Game of Thrones.

To my knowledge, this is the first biopic centered on a celebrity dwarf, even though he's receiving half of the attention. Viewing the trailers on YouTube was fascinating despite my doubts on Peter Dinklage. I know he's a well-established actor, and he was the glue to this project, but seeing him portraying a French actor wasn’t going to be easy for me to watch. I had serious doubts about Dinklage portraying Villechaize from the get-go. His voice was too deep and so off-putting, and his appearance wasn’t formally convincing. For most of the movie, I was watching Dinklage in a wig even though there were brief moments where I was looking at Villechaize. Then I thought about it and realized he’s in the title role for many reasons. If this movie is going to attract an audience, then a well-known actor with a successful series under his belt was the ticket.

A major film that raises important issues on dwarfism, which is rarely brought up. How society likes to poke fun at people with dwarfism and stereotype them with negative aspects all the time. Like other social and political issues, it’s something that’s never going to disappear.

As a little person myself, it was stupid for me not to watch it. High expectations of anything were not going to happen as it would lead to disappointment and second thoughts. However, I ended up being disappointed on some level. A few scenes felt unexpected because from his upbringing to the career choices to his suicide, he took it hard. It's sad to know what Villechaize went through to make a name for himself and ultimately paid the price of his fame and fortune.

As for messages, I was hoping to spot a few needed for our current society. It's always around when it comes to ethnicity, disability, and much more. But very rarely does the media shine a light on the topic of dwarfism (except for reality television). As I've mentioned before, there are many people out there that still believe the stereotypical stuff of little people, which makes us a complete joke. Unless there will be something better shortly in the future, this film could've easily pointed out the misconceptions about dwarfism. In some ways, it did such as the perseverance that took over Villechaize.

Overall, a film like this feels unique to a degree. As I said before, this might be the first mainstream biopic starring a little person portraying another little person, but I could be wrong. Who knows if My Dinner with Hervé would pave the way for similar pictures in the future?

The Objective OneReviewed in the United States on November 10, 2018
5.0 out of 5 stars
Great Movie With Some Amazing Acting
Verified purchase
This was a pretty amazing movie. I have no regrets watching it (and I can be pretty picky). The movie was well written. It is based on the true story of Herve Villechaize and is focused on the last moments he spent of his life up until his death (I won't give that away for those who are unfamiliar with how he tragically died). It movie parallels the life of Herve Villechaize (best known for his role as Tattoo in the hit series Fantasy Island), and a comeback kid reporter who works for a British newspaper, Danny Tate (played by the Irish actor Jamie Dornan). Both individuals lived lives that spun out of control because of the bad decisions they made (including some form of substance abuse and plenty of womanizing- which was artfully featured throughout the movie). Audiences watch Herve tells his story to a begrudged Danny as they embark on a wild evening out on the town, while Danny attempts to maintain his sobriety. Herve describes to Danny how his life took many wrong turns, while in real time as they spend their evening out, wrong turns are made. During this time, the two learn about each other and realize they have more in common than they realize. It's a tale of rejections, triumph, addiction and sadness with plenty of flashback scenes that eloquently tell both characters' stories. Both principal actors performed brilliantly and you can't help but feel sympathy for them. Peter Dinklage is an amazing actor and performed outstandingly. His acting was so well executed, I didn't know if any emotions I felt was for Herve, or Dinklage himself as the actor (and I usually don't allow myself to feel any emotion when watching a movie); Dinklage's voice and accent was uncannily spot on to Herve, and might have played a small role in this. On top of that, the soundtrack is pretty amazing. The writer/director/producers picked some of the best music from that time to highlight the mood of the movie. I can't say how I will feel about this movie ten years from now, but right now it is a must see. On a different note, the only actor's performance I had a tough time with (and was comical at best), was Andy Garcia, who sounded more like Count Dracula than Ricardo Montalban in playing the role of Mr. Roarke in Fantasy Island. Enjoy!
3 people found this helpful

candide-lover Reviewed in the United States on March 12, 2019
5.0 out of 5 stars
wonderful movie
Verified purchase
i loved everything about this movie. its a known fact that dinklegde is a great amazing actor but this made you feel too much for the character even his facial expressions. also jamie dornan did a great job playing a messy guy trying to get his act together. wonderful job on his part. i do indeed think this guy is a good actor and he obviously seems to try very hard to do a great job. kudos to him. he will certainly be remembered for more than those dumb fifty shades movies and this is one of the reasons. wonderful wonderful movie. liked everything about it. even more that it was a true story.
One person found this helpful

Ray BodReviewed in the United States on March 1, 2019
2.0 out of 5 stars
Disappointing Emotional Connection
Verified purchase
Maybe my expectations were too high. The story is generally about two guys, both formerly successful with their lives falling apart. Their relationship has no chemistry. The characters and story do not convey a sense of dramatic purpose. It's a cinematic narrative without emotional appeal.
One person found this helpful

alicen1derland9Reviewed in the United States on March 20, 2019
5.0 out of 5 stars
A Touching Tribute
Verified purchase
A beautiful and revealing docudrama about a brief span of time in the lives of our two main characters. Both in crisis, they arrive at an understanding that is both touching and tragic. Jamie and Peter were absolutely stellar in their portrayals of the two "real life" people, and were captivating from the opening scene. Loved this movie and both of the actors - and it was a story worth telling.
3 people found this helpful

PCSProShopReviewed in the United States on December 8, 2018
4.0 out of 5 stars
More than worth the watch.
Verified purchase
Sacha Gervasi, puts all the pieces into place. I'm quite sure there is quite a wonderful story that will never be really told, as ALL our lives have one if lived. I believe we can see the "untold bits" in this well told tale. Although, as expected, the naughty bits, are a bit OVER stated for dramatic effect. I think this is still well done, and well worth the watch.
One person found this helpful

Linda LouReviewed in the United States on March 8, 2019
5.0 out of 5 stars
Very good movie
Verified purchase
This was a very interesting movie. Loved Jamie Dornan as Danny Tate.
2 people found this helpful
See all reviews
Back to top
Get to Know Us
Make Money with Us
Amazon Payment Products
Let Us Help You
EnglishChoose a language for shopping. United StatesChoose a country/region for shopping.
© 1996-2021, Amazon.com, Inc. or its affiliates