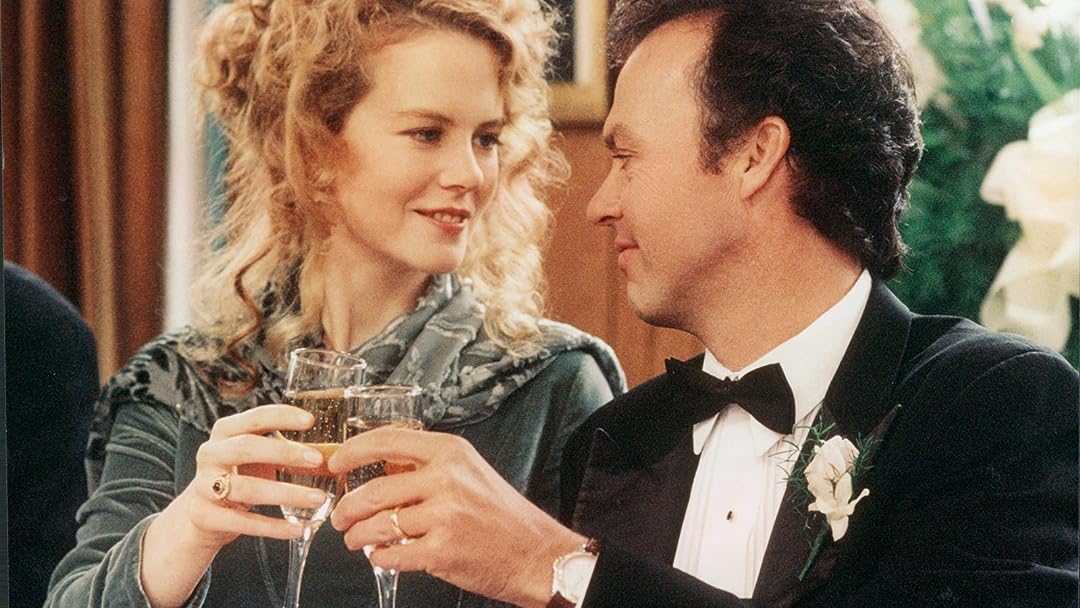 Sammy DudeReviewed in the United States on June 5, 2021
4.0 out of 5 stars
Keaton, Not Kidman, Is The Star
Verified purchase
I will never understand the appeal and success of Nicole Kidman with her breathy voice. She had so many opportunities to cry in this movie, especially when Keaton's character was talking to the video camera about meeting Kidman's character. Most women hearing that from their husbands would be in tears, but she blew that opportunity. Also, when toddler Brian is watching the video of Keaton's character reading Green Eggs and Ham. She should have had tears streaming down her face. Another missed opportunity for her to show some real acting chops.
Who would have ever dreamed of casting comedic Keaton as a man dying of untreatable cancer? He was fantastic in this role. The only critique I have is that the Chemo treatment would have caused hair loss.
Very small part for Queen Latifa, but she made it work for her.
This movie will bring tears if you have a heart.
The rest of the cast, plus the wedding scene are all great. Makes me pine for the ethnic neighborhoods of my own youth.

Charles M. StrnadReviewed in the United States on June 26, 2008
5.0 out of 5 stars
Art imitating life
Verified purchase
I am a blood/cancer specialist (for 25 years), and have always been put-off by most of Hollywood's attempts to portray medical-related drama on the big screen. Scores of such attempts have always seemed to me to be overly-forced efforts to wring some emotional impact from the audience, by over-done acting and grandiose "life-and-death" scenes, as if everything that happens in medicine is so different from everyday life. The simple, daily human drama that I have been priviledged to witness in my work has always struck me as something that would make a much better movie than anything Hollywood has done.
"My Life" , in my opinion, is one bright, shining exception to the rule. I saw this film when it first came out in the theatres, and just recently bought a DVD for home use- and after watching it again just last night, felt compelled to offer this review.

The story line is that of a young man (Keaton) diagnosed with incurable kidney cancer, spread to his lungs. He's a work-a-holic executive type in Los Angeles, with his wife (Kidman) pregnant with their first child. While he actively seeks out all conventional medical therapies for his disease, and continues to work (and keep his diagnosis from friends and even his own family), the disease progresses- and early on he is racked with anger and denial, aggravated by his emotional and physical estrangement from his family back in Detroit. He begins to video-tape himself, with practical (and frequently both hilarious and insightful) suggestions for living life, in order that his newborn child will know who his/her father was- hence the "My Life" title. The stages of disease progression are shown unsparingly and in a very matter-of-fact way, and for once in the movies, we see a patient who actually doesn't get MORE attractive, as he is dying. At the insistence of his wife, Keaton reluctantly begins to see a Chinese "faith-healer", and the several scenes involved with this are also rather insightful, as regards what true healing is all about.

But the impact of this movie goes well beyond the compelling and well-written plot.

First and foremost, this movie more than any other seems believable, seems real.....in no small part due to the exceptional screenwriting and acting. Though the two leads (Michael Keaton and Nichole Kidman) are clearly established, big-time movie stars, one never gets the feeling that you are watching big-time movie stars acting out a part: they say things and do things that real people do, when confronting a serious illness, and the imminent prospect of one's mortality. Bravo to the screenwriters for giving these exceptional actors believable things to say, and bravo to the actors for conveying the incredible emotions that they do, both through their words and their body language. In most movies where there are a lot of "tear-jerking" scenes I get ultimately uncomfotable, but not here. Every scene in this movie, from riotous laughter to the deepest sorrow, rings absolutely true. I know, because I see and hear the same from things I am witness to personally every day.

But there's more to this movie than just the medical story- it's also a powerful story of forgiveness, and also an almost Wordsworthian tribute to the lost innocence of childhood. The flashback scenes of Keaton revisiting the home of his childhood touches so many familiar buttons, that anyone who has done the same in their life will surely be moved to tears- and tears mixed with sadness, longing, and even joy. As Wordsworth wrote: "Though nothing can bring back the hour.....of splendour in the grass....of glory in the flower....we will grieve not, rather find.....strength in what remains behind." The scenes in this movie about Keaton's childhood have this wonderful, longing, and lyrical quality- never melodramatic or overly-sentimental either- another tribute to the filmakers.
The Chinese "faith-healer" in the movie seemed to me an allegorical figure: a means to convey the ultimate truth about serious illness and death- that real healing is not of the body, but of the mind. We all die physically one day, but worse than this is the mental death we so often die daily, through the diseases of anger, denial, selfishness, apathy, and fear.

The musical score (by John Barry) adds to every scene, and is among the more poignant and lyrical soundtracks I've ever heard in a movie. I own a copy of the soundtrack, and by itself it is a moving work of art.

I give this movie 5 stars, without reservation. If you've never seen it, and even if you don't go for "medical dramas", see this one. You won't regret it.
82 people found this helpful

MollyReviewed in the United States on December 1, 2020
5.0 out of 5 stars
Good movie
Verified purchase
The first time I saw this was when my father in-law had cancer & was dying. My sister in-law cried through the entire movie. It is a well made movie but can pull at your heart. I really don't know why I bought the movie, but for some reason I had to have it. I've watched it several time & still cry each time. I always remember my father in-law each time. Is a well made movie.

Shane HoustonReviewed in the United States on November 11, 2015
5.0 out of 5 stars
Thankful and grateful for "My Life"
Verified purchase
Watching this movie made me take a look at "my own life" it made me realize how easy it is to go through the motions of days, months, and years without taking the time to examine my purpose on earth. It compelled me to go back into my childhood and open up wounds and sort through family events that I played over and over like a movie but it never had an ending. This movie is like a moving prayer in action where it freely allowed me to not only relate to several parts of the movie but it reached into my soul; way out of my comfort level and for the first time in years I felt alive and unafraid. I reached out to my family and began the process of expressing my feelings and loving from my heart, something I closed up long ago. It's amazing that it took a movie to wake me up and live again. It so easy to take everything for granted, I now live in the present moment; the past is like the smile of an old friend and my future is a grateful warm hearted hello.
12 people found this helpful

Donna ChaffinReviewed in the United States on May 25, 2022
5.0 out of 5 stars
Customer Quality Care
Verified purchase
I love this movie a lot of it reminded me of my husband and I,I’ve since remarried years later and our was 2 weeks old he was to weak to hold him 😭 he videod every single moment as with me

Gena L.Reviewed in the United States on July 8, 2021
3.0 out of 5 stars
Beautiful movie but no subtitles in dvd for those with hearing loss!
Verified purchase
Beautiful, stirring movie with excellent acting and a good quality dvd. I am giving this dvd cut three stars, though, because there were no subtitles. I am hard of hearing, and had to return it because there were no subtitles. I originally saw the movie when I still had hearing, and I was sadly disappointed with this dvd.

VATCHE MReviewed in the United States on March 7, 2019
5.0 out of 5 stars
A good "Life" lesson
Verified purchase
Great movie. I watched it the first time when it first came out in 1993. It was a good wake up call for me about my life. No movie ever made me think about small things in life for days and weeks. It's a good reminder not to take for granted being healthy and being there for my kids to watch them grow up... Also not to complain about small stuff and be sad. Doesn't matter how successful you are or how much money you make, if you are not healthy nothing matters.
One person found this helpful

HollyReviewed in the United States on September 29, 2012
5.0 out of 5 stars
THIS IS A BEAUTIFUL MOVIE THAT WILL GRAB YOUR HEART. MICHEAL KEATON'S PERFORMANCE IS REVELATORY
Verified purchase
A young, successful, powerful Hollywood player with a beautiful, loving, pregnant wife (a young Nicole Kidman) develops life threatening health problems and begins a journey of self discovery with the help of an Asian alternative medical doctor (Haing S Ngor from The Killing Fields). Reviewing his (Micheal Keaton) life and resolving, both, current and long dismissed family /life issues and learning acceptance and forgiveness, especially for himself, he eventually follows a path to peace and transformation.
I saw this movie about 15 years ago and it has always haunted me. I recently bought it again and it is, literally, WONDERFUL. MICHEAL KEATON IS BEYOND OUTSTANDING. A TEARJERKER, YES. BUT JOYOUSLY SO.
3 people found this helpful
See all reviews
Back to top
Get to Know Us
Make Money with Us
Amazon Payment Products
Let Us Help You
EnglishChoose a language for shopping. United StatesChoose a country/region for shopping.
© 1996-2022, Amazon.com, Inc. or its affiliates