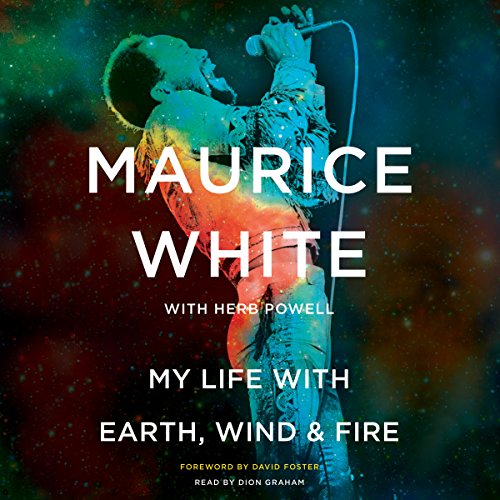 My Life with Earth, Wind & Fire

4.8 out of 5 stars
4.8 out of 5
703 global ratings
How are ratings calculated?
To calculate the overall star rating and percentage breakdown by star, we don’t use a simple average. Instead, our system considers things like how recent a review is and if the reviewer bought the item on Amazon. It also analyzes reviews to verify trustworthiness.

bbossladye
5.0 out of 5 stars Awesome book
Reviewed in the United States on September 15, 2016
Verified Purchase
I have always loved EW&F it was a part of my childhood, my mother always played their records and when I became an adult I have collected all of their songs. Maurice White had always been a mystery to me, but for some reason I felt if I could ever meet him he would instill in me so many spiritual truths that I had questions about.
This book was beautifully written and I binge read it for 2 days straight. After reading this, I felt like I really got to know the real Maurice White. He was a positively beautiful man inside and out.
This book is a must read for all diehard EW&F fans. You really feel like you are on the sidelines looking into Maurice White and EW&F's life. You really see and feel all the ups and downs and victories of the band. You even feel all the emotions of Maurice White as he created his "baby" EW&F. I loved this book. I feel inspired by it . I read this book for a reason, it came to me at the right time in my life. I will forever miss Maurice White, he was someone I wish I could've had deep conversations with, he always kept his head to the sky.
Read more
69 people found this helpful
Helpful
Report abuse

Amazon Customer
5.0 out of 5 stars Its Maurice White of course its 5 stars!!
Reviewed in the United States on May 29, 2017
Verified Purchase
What a man and what a surprising story. A tragic start being left alone by his mom at 5....then goes on to touch millions with his love and his incredible acumen for creating the most amazing music ever. Having first discovered EWF in the early 70s then falling in love with them with All n All and beyond, it was wonderful hearing the backstory in Maurice's own words. How a man with such a tough beginning could "turn it into something good" in such a huge way is inspiring. I believe it was his severe life challenges as a little boy that drove him in such a magnificent way to pouring his heart and soul into music. He was relentless and the product proves it. It wasn't so much Maurice the musician as it was Maurice the passionate orchestrator/the uber-focused band leader, that made EWF such a force from 1975-83 (often to his great personal sacrifice/burden). Their greatness hit the top-40 standards for a few years, but their message lives on far beyond that fickle metric. Indeed FACES which had poor commercial/critical success, I personally find EXTRAORDINARY -- as do many EWF fans. Anyway, this was a pleasure to read, the detailed personal account from a very private man; it was loving of him to share with us, the people who were/are so profoundly touched by his message and his music. I hope ultimately that he fully understood the profound effect of the love he channeled to so many, for that I hope he has an eternal reward. Miss you Reece, wish I knew you as a friend.
Read more
16 people found this helpful
Helpful
Report abuse

E.Kay
5.0 out of 5 stars Renewed, inspired, uplifted
Reviewed in the United States on July 24, 2017
Verified Purchase
This book was truly awesome. I am so happy that I purchased it in the unabridged CD format. From the beginning I had the feeling that the reader, Herb Powell was the perfect selection. I am not in the music business but definitely an appreciator of music and all arts. From around my teenage year, 1979 (Reasons came out - no more really need to be said), I "got" not only the music of EWF but the spirituality, the vibe and the philosophy.
Maurice White's vision, direction, personality - life seemed to eloquently and honestly flow from the CDs. Nearly four decades later, I am renewed, inspired and uplifted. I am thankful for the deeply aware of the distant & recent past, those of the present and those who are to come for seeing no other way than to fight, at all cost, to bring to fruition the vision that God clearly placed in them . When they get to write their own story we are all the more enriched.
One thing though, I was born and raised in Chicago, Illinois and by his mispronunciation of several Chicago street names, it was clear that Herb Powell is unfamiliar with my beautiful city. Because everything else was on point, I'll let that slide. :-)
Read more
10 people found this helpful
Helpful
Report abuse

Mark S. Crawford
5.0 out of 5 stars The Stars Aligned!!
Reviewed in the United States on December 7, 2020
Verified Purchase
How does any group become successful? What degree of chance occurrence, hard work, and chemistry have to come together for a group to become the standard in its field? A group like Earth, Wind, and Fire is an anomaly in the highest order. Such a group had to bloom organically; such a group couldn’t be forced. And yet, every group has a leader, an instigator, a spiritual guide. Such was Maurice White.

Maurice White became successful the old fashion way – he worked for it. In a time when current “musicians” can “compose” on a computer, and “performers” “entertain” us on YouTube, Maurice White was a standout leader whose old-school work ethic will outlast any current flavor of music.

His autobiography is a great read, not only for the behind-the-scenes information regarding E, W & F, but also for the balance of various personal topics. Many music related auto-biographies are salacious and sensationalize or contain minute details of life on the road and gig after gig. This book pulls back the curtain to reveal mature and adult topics such as his home life and family dynamics, experiences in his early music career, assembling and leading a music group, maintaining a work and personal life balance, quests for meaning and spirituality, and contemplating his legacy.

Also disclosed in the book are the names of the team White assembled in the studio. Specifically, studio engineer George Massenburg, and producer/collaborator Charles Stepney. These two were the secret sauce to White’s musical receipts. Imagine having to mix a classic E,W, & F song! Or try to come up with a chord progression or horn lick as funky as Stepney. Learning about Massenburg and Stepney was my “ah-ha” moment while reading this book. It was, to me, like learning the secret to a magic trick.

White (with author Herb Powell) assembled a book that will encourage and uplift. It’s as much about finding yourself and acting on your potential, as it is about assembling and maintain E, W & F. The book is about defining “the Concept” and working toward it. As Maurice wrote, “My concept of Earth, Wind & and Fire was that its music would render itself to humanity by encouraging an investment in the inner life (p. 87).”

VALDAS BYTAUTAS
5.0 out of 5 stars a great book about a great man!
Reviewed in the United Kingdom on September 30, 2018
Verified Purchase
Maurice White is one of America's music greatest treasures.
I have been an Earth, Wind & Fire's biggest fan since 1973 (and will be him forever). I have their all music on vinyl, CD and DVD. Their music love all generations.
This book is one of the best autobiographies that I have ever read! It is full of wisdom and humanity. First of all I loved this book was because of the way that Maurice talked about his musical life, how he came about playing the drums and how he listened to other musicians for inspiration. Maurice has done everything in the music business and it's easy to understand why after reading this book.
A must have for any EWF fan.
Read more
3 people found this helpful
Report abuse

Tony Laforce
5.0 out of 5 stars Love The Music and Thank You Maurice
Reviewed in the United Kingdom on June 19, 2020
Verified Purchase
The music of Earth Wind and Fire will last forever led by the amazing Maurice White
This is an important music book highlighting the struggles encountered in making an African American group into the giants of the music business. It showed how they tackled the racism in the music industry, from business, to promotion and touring. The struggles in keeping so many band members on the musical right track while looking for creative ideas to deliver some of the greatest music in my view: Fantasy, Rason, After the Love has gone, Serpentine Fire. His honesty about his family, brothers and band mates makes this a good read for those of us who love music

Tim Jenkins
5.0 out of 5 stars Absolutely excellent
Reviewed in the United Kingdom on December 12, 2016
Verified Purchase
If you're bothering to read this, you probably already know what a phenomenal contribution Maurice White has made to music.

The book is an illuminating guide to what it took to get there (no spoiler: a lot), the efforts to sustain the deserved huge success, and the commercial and physical decline - all the more impressive from a man not given to sharing personal details, as he states himself.

A great loss to music, but the legacy he leaves behind is a rich one.
Read more
One person found this helpful
Report abuse

GT One
5.0 out of 5 stars Amazing Read
Reviewed in the United Kingdom on May 7, 2021
Verified Purchase
Maurice White was such a great personality and to be able to read about his journey in such an open honest and transparent way was a privilege. I would recommend this book to anyone who wishes to gain an insight into him and EW&F
Read more
Report abuse

Amazon Customer
5.0 out of 5 stars A keeper
Reviewed in the United Kingdom on December 7, 2019
Verified Purchase
I will not be dropping this in the charity shop. Its a keeper and a re read sometime. Could not put it down.
Read more
One person found this helpful
Report abuse
See all reviews
Back to top
Get to Know Us
Make Money with Us
Amazon Payment Products
Let Us Help You
EnglishChoose a language for shopping. United StatesChoose a country/region for shopping.
© 1996-2021, Amazon.com, Inc. or its affiliates