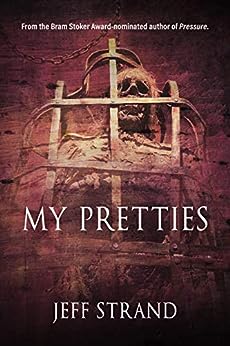 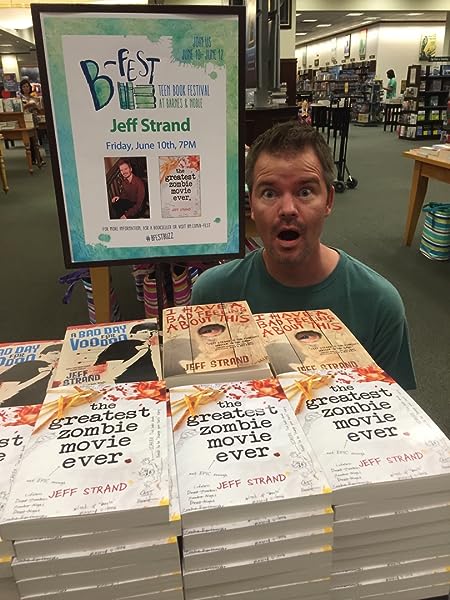 by Jeff Strand (Author) Format: Kindle Edition
A novel of terror from the Bram Stoker Award-nominated author of PRESSURE.

A serial kidnapper is preying upon women. He abducts them, then locks them in one of the cages dangling from the ceiling in a soundproofed basement. There, he sits quietly and just watches them, returning night after night, hoping he'll be in the room at the moment his beautiful captives finally starve to death.

Charlene and Gertie have become fast friends at the restaurant where they work. But Charlene is concerned when she hears how her co-worker spends her evenings: Gertie's cousin is one of the missing, and Gertie wanders the city streets where many of the abductions took place, using herself as bait with a high-voltage stun gun in her pocket. Charlene reluctantly offers to trail her in a car, just in case she does lure the kidnapper and things go wrong.

Unfortunately, the women find themselves the source of unwanted fame. And now they're on the radar of a very, very dangerous man...

"MY PRETTIES is full of twists and turns, and just when I thought I knew where Strand was going with the story, he turned it on its head and shocked the shit out of me. And being Jeff Strand, he made me laugh as much as he was making me cringe." -- Horror Drive-In

4.4 out of 5 stars
4.4 out of 5
335 global ratings
How are ratings calculated?
To calculate the overall star rating and percentage breakdown by star, we don’t use a simple average. Instead, our system considers things like how recent a review is and if the reviewer bought the item on Amazon. It also analyzes reviews to verify trustworthiness.

Mylene
5.0 out of 5 stars Jeff Strand deserves chocolate milkshakes for life!!!
Reviewed in the United States on June 10, 2019
Verified Purchase
This novel was so much fun!
We have a weird, disfunctional, memorable family of villains and two female main characters you could root for, and who complemented each other. Charlene, in particular, is compelling as the selfless heroine. You can’t help but love her. Further to that, it was nice to read a story in which the main character is a wise-cracking lesbian.
Besides being a dark horror, My Pretties is filled with Strand’s sarcastic and dry sense of humour. It gives the majority of his stories that 80s cheesy horror movie feel.
Again.... I loved the story.
The only other comment I have is the cover of the book. The picture itself is fine but I was completely distracted by the typeface. Is it me or is there a very odd space between the R in Pretties and the first E? I kept staring at the cover as the word “Pretties” looked so strange, and I kept asking myself if Pretties was spelled wrong.
If that was the intention, then bravo. Otherwise, you may want to consider the font and spacing, and its effect on marketing the book.
Buy this book now if you want to read one of Strand’s best novels.

Darrell Grizzle
5.0 out of 5 stars A Crime Thriller as Well as a Horror Novel
Reviewed in the United States on June 3, 2019
Verified Purchase
Despite the title, there is nothing Oz-like or magical about MY PRETTIES. The only monsters here are humans. This is a crime thriller as well as a horror novel. Jeff Strand's trademark humor comes through in the dialogue between characters, but overall this is one of Strand's darkest and most disturbing novels. Don't start reading this at bedtime; there are several unexpected plot twists that will keep you reading late into the night.
Read more
12 people found this helpful
Helpful
Report abuse

No One In Particular
5.0 out of 5 stars Excellent!
Reviewed in the United States on June 2, 2019
Verified Purchase
Another awesome story from my FAVORITE author. Great to get his newsletter so I knew this had come out! Just finished pressure, really good book, though not as humorous as most of his other....still loved this and it! Can’t wait for more ;)
Read more
10 people found this helpful
Helpful
Report abuse

Tod M. Clark
5.0 out of 5 stars NO SPOILERS
Reviewed in the United States on June 15, 2019
Verified Purchase
MY PRETTIES is the best book Jeff Strand has published to date! Jeff Strand is an author who uses different styles with different books and MY PRETTIES is of the more serious dark fiction, similar in style to PRESSURE and BRING HER BACK. I am a fan who enjoys all the different styles Jeff Strand uses but fans of his dark and more serious style are gonna love MY PRETTIES.
Read more
7 people found this helpful
Helpful
Report abuse

Lionel Ray Green
5.0 out of 5 stars One of the most original and suspenseful horror releases of 2019
Reviewed in the United States on June 5, 2019
Verified Purchase
My Pretties is a fast-paced novel filled with twists that get more twisted as you reach the climax. What starts out as a story about two young but naive women trying to lure a serial kidnapper into their trap quickly transforms into the grim and sometimes darkly comic tale of a sick man coping with the surprising issues that interfere with the enjoyment of his crimes. In My Pretties, author Jeff Strand shines the spotlight on his villain more so than his female heroines and delivers one of the most original and suspenseful horror releases of 2019.
Read more
5 people found this helpful
Helpful
Report abuse

Kayla Krantz
5.0 out of 5 stars Loved It!
Reviewed in the United States on June 28, 2020
Verified Purchase
A family that slays together…

There’s a serial killer taking women from the streets. When Charlene meets a new waitress named Gertie, she learns that her cousin is just one of many. Gertie, desperate to know if her cousin is still alive or dead, has a plan to lure the serial killer to her. Worried for her safety, Charlene decides to go with her. From there, the girls lives descend into a twisted game of murder and despair.

Wow. Just wow. I don’t even know where to begin. This book had everything I could hope for in a creepy little read: a sadistic psychopath, a snarky kick-ass heroine, and a lot of dark humor. I absolutely loved Charlene. She was punk and fearless. One the best characters I’ve read in a long time. Her relationship with Gertie was both hilarious and believable. Gertie herself was a FOIL character to Charlene. She was quiet and calm though her plan to trap a serial killer wasn’t the best.

The serial killer, Ken, was his own kind of personality. The women he stole, he locked in cages, watching them slowly starve to death. Though the reason for this method of murder wasn’t explored in much depth, I thought it made him a unique killer from similar books in the genre. Not to mention his sense of dark humor.

I loved absolutely everything there was. My only qualm is that I wished this was longer. I picked up this book on Kindle Unlimited first but then bought the audiobook. Both formats are splendid, but the audiobook gives it that extra bit of awesomeness because the narrator absolutely nailed the characters.

Mary Jude Schmitz
5.0 out of 5 stars Jeff Strand does it again
Reviewed in the United States on June 7, 2019
Verified Purchase
Another darkish type horror book with a bit of humor. This one is definitely not as heartwarming as some of Jeff's other books but isn't absolutely horrifying and depressing either. The book has likeable characters for you to cheer for and villains for you to hope get what they deserve. There are even some surprise villains. Be ready for some gore and violence (it is a horror book) but this a very enjoyable book. Keep 'em coming, Jeff!
Read more
8 people found this helpful
Helpful
Report abuse

BridgettTop Contributor: Eye Makeup
TOP 1000 REVIEWER
5.0 out of 5 stars Eead this. It's a must-read. Everybody should read it. Soon.
Reviewed in the United States on August 10, 2021
Verified Purchase
I actually finished this book weeks ago and haven't had time to write the review...because I am obviously a terrible person.

But, it's okay because in the interim, I totally met and hung out with Jeff throughout the Scares That Care weekend in Williamsburg, VA! He's just as funny and wonderful as I thought he'd be.

My Pretties is an incredibly dark (yet funny), twisted (yet charming), and diabolical (yet clever) story. And I'm just going to say it...I love that Strand chose to write a lesbian protagonist. He totally did her justice, and I absolutely loved the character.

I'll also say this. Jeff is the only author I know whose antagonists are actually...likeable. It's bizarre, but boy, do I admire his skillset.

Anyway, read this. It's a must-read. Everybody should read it. Soon.
Read more
Helpful
Report abuse
See all reviews

Amazon Customer
3.0 out of 5 stars Not my favourite
Reviewed in the United Kingdom on October 5, 2019
Verified Purchase
First let me stress that I am a huge Jeff Strand fan. Having read many of his books and short stories I love his mix of wacky humour and horror. I also read the other reviews left about, ‘My Pretties’ and it left me thinking, ‘Did I miss something??’.
On the whole the story was good with the idea being dark and unsettling. I enjoyed it and read it quite quickly. My only issue was I felt the 2 things that I enjoy most about his writing (the humour and horror) were watered down so it wasn’t particularly funny or particularly graphic or gory. Now that might be because I enjoy more ‘Edward Lee’ type depictions of horror or that I’m just sick,sick,sick!!!!
Overall I just felt a bit disappointed- don’t hate me!
Read more
One person found this helpful
Report abuse

W.Fenlon
5.0 out of 5 stars Jeff Strand goes a little darker this time...
Reviewed in the United Kingdom on June 21, 2019
Verified Purchase
I was definitely in the mood for a new Jeff Strand novel. This was definitely darker than his previous. Still a smattering of humour throughout though.
Always good fun. And sometimes that's all I need. Nothing too taxing on the brain.

Robert D. Ferrari
5.0 out of 5 stars Gibbet humour. His best yet.
Reviewed in the United Kingdom on November 28, 2019
Verified Purchase
Jeff Strand is a bad, bad man.
The head honcho of horror comedy.
I have read all of his books, ans this one, though darker than many of his other works is my favourite thus far.
Read more
Report abuse

blueberry
5.0 out of 5 stars would recommend
Reviewed in the United Kingdom on August 15, 2019
Verified Purchase
enjoyed this book. it was really good.
Read more
Report abuse
See all reviews
Back to top
Get to Know Us
Make Money with Us
Amazon Payment Products
Let Us Help You
EnglishChoose a language for shopping. United StatesChoose a country/region for shopping.
© 1996-2021, Amazon.com, Inc. or its affiliates