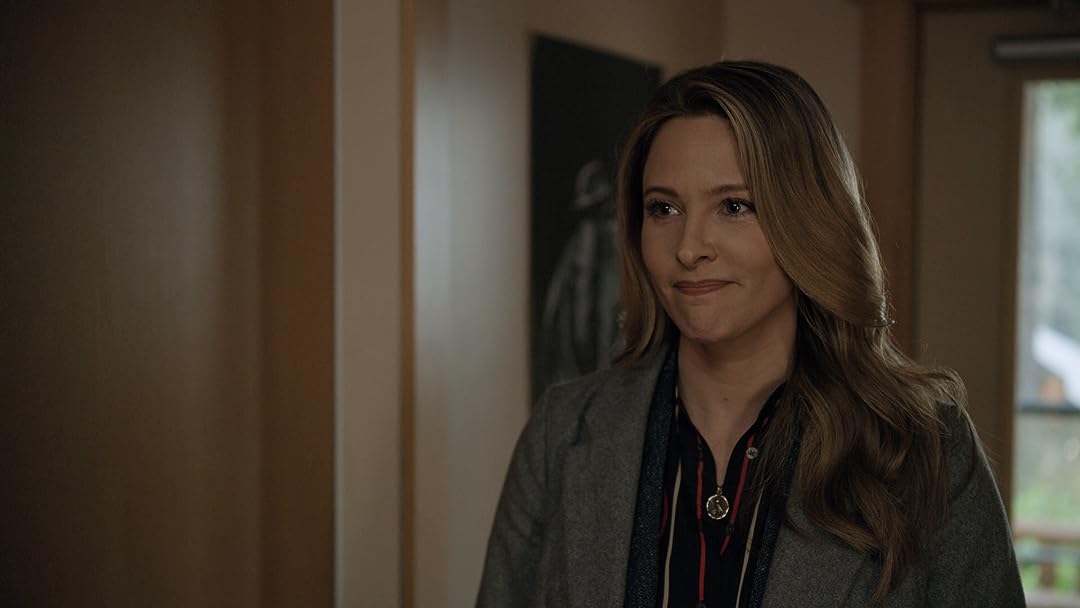 (182)
7.51 h 24 min2019ALL
When a college student is found dead, English professor Amy uses her crime fiction expertise to unravel the case faster than detective Travis, who ends up working with Amy to catch the killer. Stars Jill Wagner, Kristoffer Polaha.

patriciaReviewed in the United States on May 2, 2022
5.0 out of 5 stars
just a question
Verified purchase
why do people who order wrong title or it is an accident always give the show a 1? isn't this review about the movie.
anyway this was okay. I like Amy better than some of other Hallmark's mystery women . I gave it a 5 when would have given it a 4 because of the 1's given.lol

KristenReviewed in the United States on May 25, 2022
4.0 out of 5 stars
Pretty Good
Verified purchase
I'm running out of Hallmark movies, so I tiptoed over into a mystery. It was pretty good. It had a lot of plot holes, like a lot lot. Still it's not trying to compete with John Grisham, so I'm calling it good. I solved it way early but then I've seen a lot of Scooby-Doo.

Jane AustenReviewed in the United States on August 3, 2021
1.0 out of 5 stars
Mystery 101
Verified purchase
I like the Mystery 101 series they are great entertainment. However, I typed in Mystery 101 Killer Timing into the find on my Amazon Video app and this movie popped up so I thought I was ordering the right movie. Well it's not Killer Timing.

DaveReviewed in the United States on April 24, 2022
3.0 out of 5 stars
Meh...
Verified purchase
An attempt to follow the "Garage Sale Mystery" formula. It's not bad, but it's not great. Not sorry I got it but I won't buy more.

Pat N.Reviewed in the United States on August 28, 2021
1.0 out of 5 stars
Did not want to buy it.
Verified purchase
This was ordered by mistake by my 88 year old mother. Have to put parental controls on.
One person found this helpful

Linda DeeReviewed in the United States on March 17, 2022
5.0 out of 5 stars
Loved it!
Verified purchase
Loved the characters, the interplay and the story! Hope the series continues.

Colleen A EellsReviewed in the United States on July 26, 2021
5.0 out of 5 stars
Great mystery
Verified purchase
If you like mysteries this is a good series an it great to get it as a down load rather then having to look for the dvd.

H. BalaReviewed in the United States on July 23, 2021
4.0 out of 5 stars
"You are a teacher who teaches about pretend detectives, so, no, you can't join me."
Hallmark Channel's been doing this thing where they've plucked names from their stable of beautiful leading ladies and given them their own mystery franchises to air on Hallmark's sister channel, Hallmark Movies & Mysteries. Case in point, Jill Wagner, star of Hallmark rom-coms but, also, of the Mystery 101 series. In it, she plays Amy Winslow, a crime fiction professor at Elmstead College in Garrison, Washington. I guess a professorship doesn't bestow spelling immunity on a body, seeing as how she's scrawled "whodunit" on the blackboard using two "n"s.

Amy's usually good at holding her students' attention. After all, crime fiction is an interesting class. Today, though, one of her prized pupils, Lacey Daniels (Louriza Tronco), seems distracted. She's fretting about her missing boyfriend, Rex, a cub reporter for the college newspaper. Seems innocent enough, right?

Wrong. Observe as a vanished beau gets parlayed into a baffling case of homicide. And here's Amy promptly up to her neck in the investigation. It took some doing, though. The police initially believed it to be a case of accidental death. It took Amy's shrewd impromptu observations for the po-po to start sniffing something fishy. And, then, Amy had to do some convincing just so she could elbow her way into the official investigation. She's told by the lead detective: "You are a teacher who teaches about pretend detectives, so, no, you can't join me." Her official capacity ends up being that she's a liaison who knows the college campus.

She finds herself working with Travis Burke (Kristoffer Polaha), a cop who'd been in her town of Garrison only for one week, fresh out of Chicago. It's a bit jarring, Polaha's interpretation of his part, seeing as how, in other movies, guy is so chill. Here, he's more no-nonsense. Also jarring is his character's sudden about-face in terms of how he perceives Amy. One minute, he's so dead set against her poking her nose in. Next minute, he's all in with her participation in the case. I'm also waiting for him to sport something other than a black leather jacket.

But maybe it's because Amy's keen deductions keep proving true. As a reader of old school whodunits, I ate up Amy's referencing Agatha Christie, Dorothy Sayers, and even Edgar Allan Poe's "The Murders in the Rue Morgue," his 1841 classic that's largely touted as the first modern detective story.

Amy and Detective Burke must sift thru copious red herrings. A stolen plant worth millions. A secret act of plagiarism. A peaceful suicide. And other elements test Amy's concentration. She's just been offered to chair the English Department. Her best-selling mystery writer dad, the celebrated Graham Winslow (Robin Thomas), has asked her to beta test his new Atticus Keller manuscript.

I will say that the mystery itself is no great shakes. What's enjoyable is how Amy forms her deductions and pieces the clues together to arrive at the resolution. I did pat myself on the back for suspecting the killer moments after they were introduced on the strength of their motive's being so obvious. Maybe it's why there needed to be plentiful red herrings.

This pilot movie was promising stuff. I immediately wanted to see more of the recurring cast, namely Amy's mystery writer dad and Claire Tate (Sarah Dugdale), the young detective who once attended Amy's class and whom Burke has taken under his wing. Meanwhile, no, I never saw Jill Wagner as a murder-solving sleuth. But I felt the same way about Courtney Thorne-Smith, initially, and I ended up liking Courtney very much as the clue-sniffing archaeologist, Emma Fielding. What I like about Courtney is what I like about Jill Wagner. There's a grace and sophistication to them. They're brainy but don't much indulge in hubris, although, okay, in Amy's case, the police are so obstinate that Amy has to resort to showing off some, with her observations, just to get them to listen. But these ladies are nowhere near as aggravating and obstructive as Aurora Teagarden or Hannah Swensen. And I appreciate that, in the third act, Amy doesn't require rescuing, and that she uses her brain AND brawn to get the best of the killer.

And, as a child of the '80s, I appreciated that the movie opened to a cover of Men at Work's "Who Can It Be Now?"