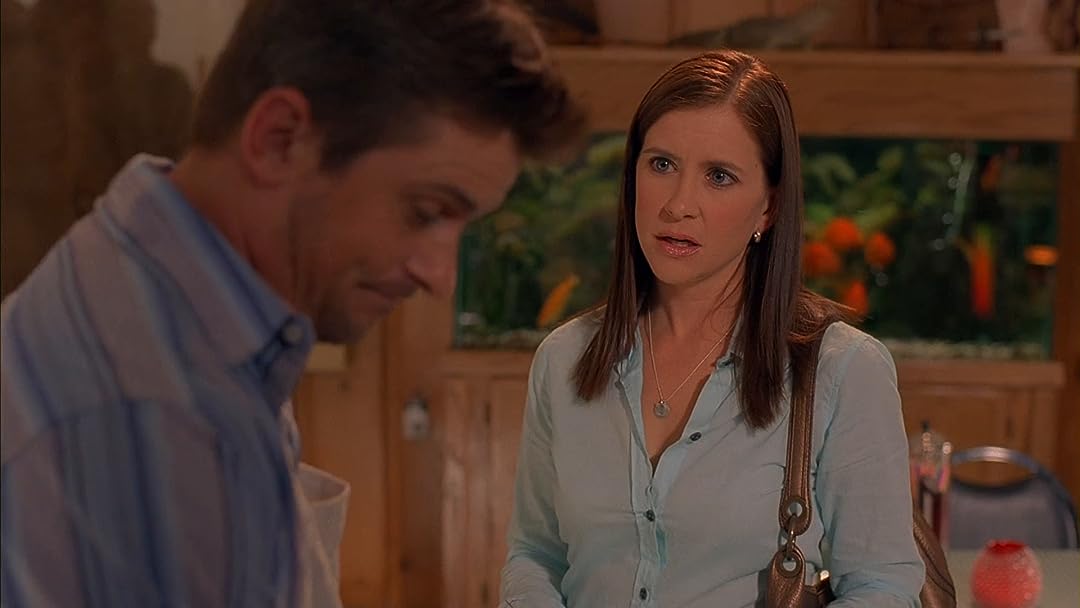 (1)
7.41 h 24 min2003PG
Bookstore owner and amateur sleuth Samantha Kinsey goes in search of her family's history again and ends up at the scene of another grisly murder in her birth mother's living room. TV-PG

H. BalaReviewed in the United States on September 23, 2021
4.0 out of 5 stars
A boo for Sam?
At First Sight is seventh of the eleven movies that comprise the Mystery Woman series and were pumped out in quick succession between 2003 and 2007. Kellie Martin reprises her role of Samantha Kinsey, a book store owner who moonlights as an amateur sleuth and the constant burr under Police Chief Connors' saddle. At least, in this movie, Chief Connors' aggravation isn't rooted in Sam's poking her nose in a homicide case.

In this one, Sam confides to her best friend (and District Attorney), Cassie, that she's adopted. The longwinded version of how Sam got to this point is that she went for an eye exam, ended up going on a date with the ophthalmologist - despite his corny eye jokes - and, somehow, during their dinner, the topic of her being adopted came up.

Well, now, there's nothing but for Sam to go looking for her birth mother. I could say she applied her deductive skills to suss out her mom's location, but, really, why do that when you've got a D.A. with connections in your back pocket?

There goes Sam embarking on a road trip. For those who like to punch addresses into MapQuest, it's a six, seven hour drive from Walden, California to Whiptail, Awasco County, California. Sam gets to Whiptail and to her birth mom's address just in time for her birth mother (Kathryn Harrold) to become the prime suspect in a homicide case. It's what happens when a corpse turns up in your house.

Doesn't help that Sam's mom has a shady past, that she lies to the police about not knowing the dead guy, that she spent time in prison with the dead guy.

With a town so small its Sheriff's Department doesn't even have a crime scene unit, of course Sam would feel the need to investigate. That's her birth mom, after all, even if she keeps mum about that until deep into the movie. It's why I get it that folks like the local sheriff and Sam's half-sister keep giving Sam the hairy side eye when she persists in butting in.

The B-side involves Sam's mentor and employee at the book store, Philby (Clarence Williams III). Back in Walden, Philby runs into an old colleague whom he calls "the world's least covert covert agent." Soon enough, Philby's gotten caught up again in his old world of espionage, to be more specific, psychic espionage. Sucks that we never get a demonstration of it. With Sam out of town, what we do get is Philby taking his turn at irritating Chief Connors (Casey Sander).

Anyway, Philby doesn't need Sam's help with what he's got going on (Philby rarely needs help). And Sam's got enough problems in Whiptail. Sam knows she's close to cracking the case open on account of she's being shot at and almost ran off the road.

So there you have it. A bit of psychic espionage (but with no demo) for Philby. As for Sam, she sniffs out a swoop and squat scam - i.e., staged car accidents - that she's told is a $20 billion business, annually. I will say that the plot does a nice job of resolving Sam's moral dilemma that comes up late in the movie. I don't know if I have the guts or moral fortitude to do what she ends up doing. Good on Sam.

It' a solid movie, given that it's a whodunit cozy teleplay. I thought Kellie Martin did a good job directing it. For those who'd been clamoring for more exploration of Sam's personal life, here you go. For those who'd been wondering how come Sam never has romantic entanglements in her movies, here you go. Question is, will the eye doctor with the corny jokes be in Sam's next mystery?

A few final notes. One: This movie again demonstrates that Cassie will bend the rules for Sam. Two: Just how much recording space is in Cassie's voice mail? Because Sam sure left a looooong, rambling message. Three: I can't help but smirk at the pulse-pounding score that was playing whilst Sam sat at a desk, poring over some documents. Somewhere, there has to be a reality where reading office paperwork equates to a nerve-jangling activity.