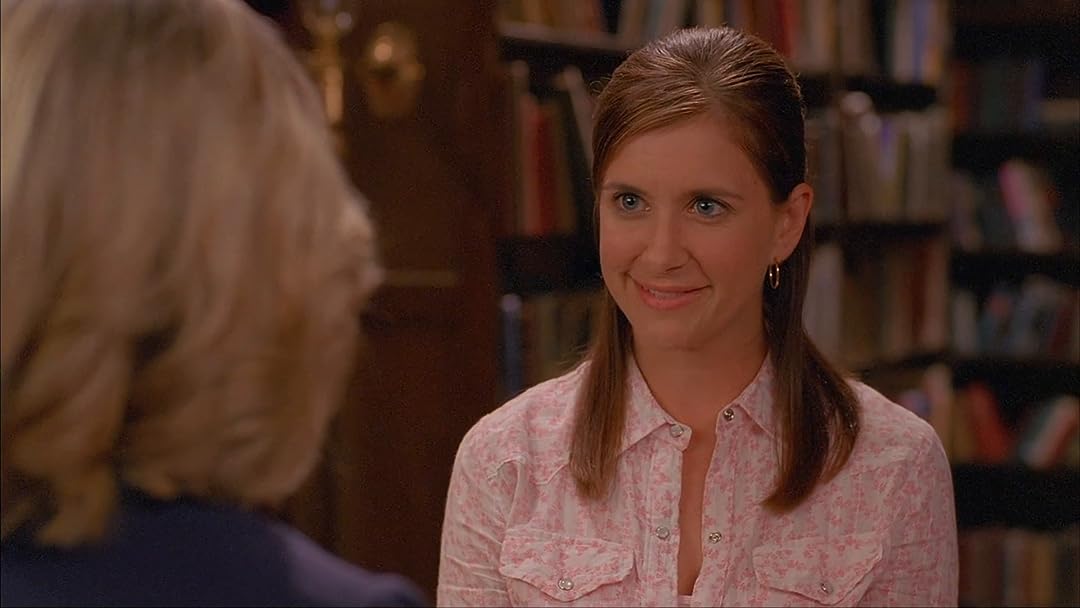 Bobby UnderwoodReviewed in the United States on April 23, 2007
5.0 out of 5 stars
"I think we need to hire a plumber..."
Verified purchase
Kellie Martin fans will love this warm and fun series of mystery films. "Snapshot" is a good entry with just the right balance of whimsy and murder. While they are a bit pedestrian, the look and setting of the series and a great cast make for an enjoyable time.

Samantha Kinsey (Kellie Martin) owns the Mystery Woman Book Store and seems to always get involved in some very real mayhem, much to the chagrin of Chief Connors (Casey Sander), who would rather not have her nosing around his cases. When her friend Barbara (Patty McCormick) claims to have been swindled out of half her brother's fortune upon his death, then is shot down while entering her home, Chief Connors thinks it was just a burglery gone bad.

Samantha, however, has other ideas, and with the help of her mysterious pal Philby (Clarance Williams III) sets out to discover why her friend was killed. A roll of film Barbara entrusted to Samantha with a picture of her brother's vintage Bently may hold the clue. Philby's mysterious past comes in handy, as does her other pal, Assistant D.A. Casandra (Nina Siemaszko).

Kellie Martin's abundant charm and a nice supporting cast drive this as much as the mystery itself. There is a fun side story and some amusing moments as Philby, for once out of his element, tries to fix some very old pipe problems in the store. George Stanford Brown, familiar to television fans as one of "The Rookies" way back when, directs this one quite nicely so that the most is made of what's here.

Created by Michael Sloan and written by Joyce Burditt, it's hard to go wrong with pretty Kellie Martin in the middle of it all. Mystery fans will find this a very pleasant distraction on a Saturday afternoon.

Kindle CustomerReviewed in the United States on December 25, 2011
3.0 out of 5 stars
Pleasant Entry in Limited Mystery Series
Verified purchase
The same key characters seen in Mystery Week-end reappear in this second TV movie of the Mystery Woman series. There is the same block-headed cop for comedy relief and also to frustrate the legal efforts of the heroine, who owns a mystery book shop.
As usual, her best friend, the Assistant District Attorney, has to warn her that her illegal ways of obtaining information are not admissible in Court and, most importantly, her shop assistant uses his unknown connections in government to get information anytime needed. In this case a friend was murdered after raising objections to a Will which she thought to have been falsified. Our heroine sets out to right the injustice after her death (by solving the murder). With no insurmountable difficulties and the help of her assistant she takes the law into her own hands and finds the information needed to break the case ( I think I violate no oath of secrecy by revealing that fact). Along the way, another completely unrelated problem is resolved as well.
All in all, a pleasant diversion to be taken lightly.
One person found this helpful

Mel OdomReviewed in the United States on June 20, 2006
3.0 out of 5 stars
Solid Entry
Verified purchase
MYSTERY WOMAN: SNAPSHOT details the murder of one of Samantha Kinsey's book club members. Barbara Sommers, one of the town's wealthy, has always been a conspiracy junkie, believing in UFOs and coverups. At the reading of her late brother's will, she finds out that she's left with none of the family company. Barbara insists that a conspiracy is in play, that she's being robbed of what's hers, and that her brother was murdered. After leaving a roll of film with Sam that Barbara tells her contains a clue to the murder, Barbara goes home and is murdered. Sam and Philby, the ex-CIA agent that was her father's friend and who shares her love of doing investigations that aren't quite legal, take up the chase for the murderer.

Kellie Martin (E.R.) stars as Samantha Kinsey. So far, A&E have made eight MYSTERY WOMAN movies, but not all of them have made it to DVD. The series was created by Michael Sloan, a staple in the mystery/adventure TV field. Georg Stanford Brown stars as Philby and even directs this one.

As a mystery, SNAPSHOT was so-so. There weren't enough suspects and the field narrowed pretty quickly once the initial murder kicked the play off. Still, Sam and her cronies are endearing characters and it was fun to watch them work.

Some of the usual confrontations with the local police was missing, and the stakes never truly rose above the solution of the murder. Philby even has his own little mystery to solve while he works on the pipes in the shop, but the solution comes out of left field and the viewer never had a chance at it.

MYSTERY WOMAN: SNAPSHOT is another great little mystery to watch in the casual comfort of home with a fellow sleuth. Perhaps the mystery will solve too quickly, with even the twists and turns telegraphed, but the characters are fun to watch and still worth the price of admission.
19 people found this helpful

Seth C. HowardReviewed in the United States on April 19, 2010
4.0 out of 5 stars
Just plain enjoyment
Verified purchase
Typical slower paced mystery plotline . Kelly and Clarence are the Odd Couple of MYSTERY and a nice fit . The small moments define these movies as much as thee larger events . Towncop adds comic relief as the strate man gone wrong . MANY specific things are out-of-place : the "plumbing" scenes are a joke!! HOWEVER , doesnt ruin the story line . The writer/producers did well in bringing 'feel' of a "book story" to screen . FAST ACTION people just pass on to something else . HOWEVER , I do think anyone looking for "unwind the day" entertainment can enjoy the "bookstore" snoop and her partner unravel the WHOLE STORY .....

silverwolfReviewed in the United States on October 7, 2012
5.0 out of 5 stars
A great gift
Verified purchase
I have bought several DVDs on line through Amazon and the descriptions of the movies are very accurate. They always arrive quickly and in very good condition. Only one time did I have to return a movie but that was a simple error of which area the movie could be played in. The one I received was only for Great Britain but the seller was able to refund my money as soon as I returned the item. Unfortunately he didn't have another one but I was able to find one on Amazon. It's great to be able to buy older movies through Amazon and their sellers.

Book Lover in NE LAReviewed in the United States on July 20, 2014
4.0 out of 5 stars
Kellie Martin plays Sam, who owns a bookstore.
Verified purchase
Kellie Martin plays Sam, who owns a bookstore. She's best friends with the Assistant District Attorney and helps the people of her town solve mysteries. This series is a little dated - you can tell it was filmed before cell phones and digital cameras came on the scene. But I liked it and I would recommend it to anyone who likes a good mystery.

A. BondReviewed in the United States on December 17, 2012
5.0 out of 5 stars
Mystery Woman: Snapshot
Verified purchase
This mystery movie stars Kellie Martin as Samantha, a bookstore owner who assists her friend after a death in the family. Questions abound, and Samantha figures out that the death wasn't an accident, but murder. If you love a good mystery with great characters and a plot that will keep you guessing than you'll love this movie.

Amazon CustomerReviewed in the United States on June 29, 2019
1.0 out of 5 stars
Loss
Verified purchase
Lesson learned the hard way: the back of the DVD was scratched so bad I couldn't watch it
See all reviews
Back to top
Get to Know Us
Make Money with Us
Amazon Payment Products
Let Us Help You
EnglishChoose a language for shopping. United StatesChoose a country/region for shopping.
© 1996-2022, Amazon.com, Inc. or its affiliates