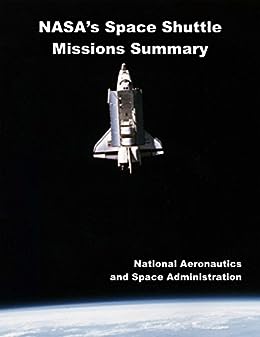 by Robert D. Legler (Author), Floyd V. Bennett (Author), National Aeronautics and Space Administration (NASA) (Author), NASA’s Johnson Space Center (Author) & 1 more Format: Kindle Edition
See all formats and editions
Sorry, there was a problem loading this page. Try again.
This is the official NASA document.
This document was originally produced as an informal Mission Operations book and has been updated since Space Shuttle Flight STS-1 and throughout the program. This version is a formally released NASA document. It is a handy reference guide for flight data for all Space Shuttle missions. “As-flown” data is provided as compiled from many flight support sources for ascent, on-orbit events, and descent mission phases. In addition, the specific shuttle vehicle configuration, payload, flight crew, and flight directors are identified for each flight. In the development of this book, the data for the early flights are contained on a single page per flight. For later flights, more pages per flight have been added, primarily for growth in mission complexity as noted in the “Mission Highlights” data column. This particularly applies to missions involved in the assembly of the International Space Station. Pertinent photos for each mission are also included on each mission summary page.
The Space Shuttle Vehicle (SSV) was the world’s first reusable Spacecraft. It consisted of a reusable Orbiter Vehicle with three Space Shuttle Main Engines (SSMEs), two Solid Rocket Boosters (SRBs), and an expendable External Tank (ET). The Space Shuttle System consisted of the SSV elements, Shuttle Carrier aircraft, payload accommodations, and ground support systems. The SSV was designed to perform a variety of missions to low Earth orbit with heavy payload lift capability.
SSV missions included: Manned payload bay laboratory science, deployment and servicing of payloads, and special support to space activities such as sortie missions (rescue, repair, maintenance servicing, assembly, and docking), and International Space Station (ISS) assembly, manning, and support including robotic and manned extra vehicular activities.
The SSV was flown for 30 years from 1981 to 2011. Brief mission summaries for each of these missions are provided in this document. The document contains “as flown” mission data and pertinent photographs for each flight. It was originally published as an informal document and routinely updated throughout the Shuttle era.
303 pages; hundreds of photos, drawings, technical illustrations and charts, many in full color.
This is a Print Replica that maintains the formatting and layout of the original edition and offers many of the advantages of standard Kindle books.

Read more
Previous page
Next page
Due to its large file size, this book may take longer to download
Fire Tablets
Free Kindle Reading Apps
Available on these devices
Create your FREE Amazon Business account to save up to 10% with Business-only prices and free shipping. Register today

Robert D.
3.0 out of 5 stars Locks up my TabA when downloading. Works fine on WIndows machine with reader software
Reviewed in the United States on November 22, 2021
Verified Purchase
I have tried to download this file several times on my TabA but it keeps locking up the tablet. Pressing X won't cancel the download. Keeps trying even after tablet is rebooted. Very frustrating. Go to Amazon account. Select Content and Devices. Select content. Find book in the list and on right side the button will allow you to cancel the download to the device. Works fine on a Windows 10 laptop with the reader software.

A nice reference book with summaries of all the Space Shuttle Missions. Definitely worth having if you can get it to work for you.
Read more
Helpful
Report abuse
See all reviews
Back to top
Get to Know Us
Make Money with Us
Amazon Payment Products
Let Us Help You
EnglishChoose a language for shopping. United StatesChoose a country/region for shopping.
© 1996-2022, Amazon.com, Inc. or its affiliates