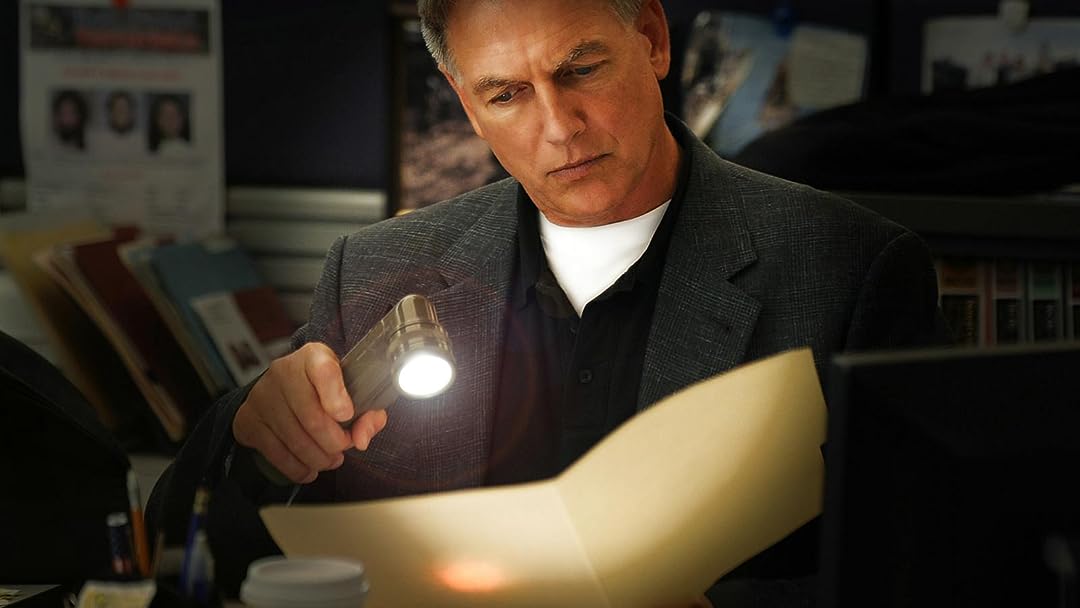 (2,989)
7.82011X-RayTV-PG
Season 8 of the hit drama NCIS starts off with "Spider and the Fly," the compelling conclusion to last season's finale that has Gibbs and his team attempting to apprehend a Mexican drug dealer threatening Gibbs' father.

JeriReviewed in the United States on August 20, 2019
1.0 out of 5 stars
No Closed Captioning!
Verified purchase
Wonderful show, but this DVD version is useless for the family member for whom it was purchased because he must have CC and this DVD doesn't come with that. I didn't think anyone made DVDs without closed captioning! For the sake of the hearing impaired, it really should say "No CC" in the product description.
15 people found this helpful

Michael GriswoldReviewed in the United States on April 20, 2016
5.0 out of 5 stars
Season Eight NCIS most Personal?
Verified purchase
NCIS has always been a show driven by characters, but Season Eight felt like the most personal season to date as bad guys seemed to take aim at the family members of our favorite NCIS agents more than any season before or since. This tone was set early on with the family drug cartel shooting up the shop of Gibbs father Jackson in an effort to send a message to Gibbs in the wrap up to the season seven arc. There’s also more complex interactions between Ziva and her father and Tony and his father.

NCIS continued to tell entertaining stories of course. However, I couldn’t help but think that as we watched how close the bad guys came to the NCIS team that we might lose one of this core of actors that has really ramped NCIS into high gear for a six to seven year period call it season four to ten. The writers do a good job in making the viewer feel as though no member of the cast is safe and that things could change in a moment.

Good storytelling + utilization of the unknown continues to make NCIS a winner.

Richard MullerReviewed in the United States on October 18, 2011
5.0 out of 5 stars
Gibbs - Gibbs - Gibbs!
Verified purchase
NCIS continues to be one of the standards of series excellence. Perhaps the best example of character study for a long time, it is mostly the responsibility of LeRoy Jethro Gibbs to make us keep guessing just how much life has effected this person. The supporting cast, which strengthens Gibb's character, has not diminished over the years, and if the writing keeps along at its usual level we are likely to see a few more seasons of Abby's "Gibbs, Gibbs, Gibbs..."
It is the subtle nuances of timely comedy mixed in with drama and nostalgia that keeps us watching...
Or, at least, keeps ME watching! In spite of the spin-off "NCIS/LA", this original idea from Bellasario is perhaps his finest work. Need we be reminded that he also created "Magnum" and "JAG"? Also excellent within their time. However, now is the time for NCIS, and this ninth season does not look like its last.
The back-stories of the individual characters, their complexity and vulnerability contribute to the overall quality of the program's structure. Where would we be without Tony and Ziva and Tim and 'Ducky' to anchor the stories and make them what they are: The Best Drama on TV.
Amazon has also contributed to my long time enjoyment of this series, by making prompt deliveries of an excellent product. I have not yet returned a single item purchased there in over a decade. Much like NCIS, Amazon just keeps me wanting for more!

California CustomerReviewed in the United States on March 10, 2014
3.0 out of 5 stars
NOT the "boxed" set
Verified purchase
Just a word of warning....if you currently collect the "boxed sets" of the NCIS seasons, twice I was sent the wrong "set" of Season 8 by Amazon. I have 5 other seasons that are separate DVD sheaths inside a "box", but what I got for Season 8 is a Clear DVD Case with the DVDs inside, NOT the "boxed sets" as the description states. It's a big difference if you've already got a certain type of "boxed" packaging and then you get a non-matching set.....it sticks out like a sore thumb!

The first set of Season Eight arrived in the clear DVD case so I notified Amazon that it wasn't "boxed" as the description states so they sent me a return shipping label and a replacement was sent out, which was supposed to be the "boxed" set.....it wasn't. It was the same clear DVD case.

I give up ordering these sets off Amazon....it's a crap-shoot ...you don't know what you're going to get.
5 people found this helpful

Ben MiltonReviewed in the United States on September 6, 2012
3.0 out of 5 stars
something's missing
Verified purchase
I have to agree with a previous reviewer, season one through six are incredibly strong. But starting in season seven, things kind of went alittle south. We have the season opening up with Gibbs killing Paloma and her brother, and then the season kind of meanders. One thing I did notice, when Ziva first came to NCIS, she was built up as this lean mean unstoppable killing machine. But in season eight, she becomes a U.S. citizen. And then is just there, Ziva is no longer Ziva. She's a shell of her former self, Mcgee's the same way. I'll put it this way, everybody almost looks bored in this season. And the only episode that really sparks anything, is the one with Abigale Bourne. Personally I'd like to see more episodes of her in NCIS, even the ending arc story didn't feel real thought out. The port-to-port killer story seemed way to drawn out to me, and then they tried to shove too much into it. While it was nice to see how Dinozzo got NCIS, it took away from the season ending story itself. And it felt like they didn't know how to end it, so it just ends. Hence the weak opening to season nine, E.J Barret and her team brought nothing to the story. It juuust didn't have that NCIS spark, don't get me wrong. I still love NCIS, but season eight is not up to par.
One person found this helpful

whereswaynoReviewed in the United States on September 19, 2012
2.0 out of 5 stars
Unacceptable DVD Authoring
Verified purchase
I enjoy NCIS quite a bit and enjoy the whole series. However, this product is a piece of crap. The episodes were authored onto the DVD in low resolution. That means that on a big screen the images are VERY BLURRY with serious JPEG artifacts. I would love to give this back to the company that made it and request a better DVD set. This is not a problem with one episode or just one disk; this is a problem on every episode and every disk in this series season. I would have given this product 1 star if it wasn't a TV series I love.

[I added the following subsequent to my original review.]
I contacted Paramount Home Entertainment and submitted a claim that the product was inferior. After a few weeks, I found a new NCIS:S8 in the mail. This one was authored in the proper resolution for DVDs. Long story short, they fixed it.

The UPC on the good NCIS:S8 and the bad NCIS:S8 are identical, but packaging is different. The bad one is in paper cardboard case with 3 small plastic DVD covers containing all the disks. The good one has a plastic case that houses all the disks in a smaller unit, about the size of a standard DVD movie case.
15 people found this helpful

Chyna DollReviewed in the United States on May 4, 2012
5.0 out of 5 stars
The Plot Thickens......
Verified purchase
Season 8 does not disappoint as the story of Ziva and Tony's characters are more defined. Assistant Director Vance is promoted to Director. Gibb's team is forced to welcome a new team and their lead investigator EJ Barrett from Rota Spain. Gibb's team along with EJ's team are charged with finding what Abby has dubbed the P2P (Port to Port) killer. Director Vance places EJ in charge of the Port to Port killer investigation and this does not make Gibbs happy (or his team). Ziva holds several phone conversations with her elusive unseen boyfriend Ray which piques Tony's interest. Tony's father makes an appearance and the two reconcile. Director Vance is seriously injured in a terrorist plot to kill Ziva's father, Eli David, head of the Mossad. McGee's identity is determined to have been stolen when mysterious purchases show up at the office and on his credit card bill. Tony and McGee team up to find out who has stolen McGee's identity. McGee finds a love interest investigating the death of a Marine. The Port to Port killer identity is found out and another cast member is killed in the season finale. The Secretary of the Navy resigns in the aftermath of the Port to Port killer and a new Secretary of the Navy is appointed.
2 people found this helpful

Operations BirdSongReviewed in the United States on December 27, 2011
5.0 out of 5 stars
OORAH for sure!
Verified purchase
I used to think our fav. 'whodunit/spy' tv shows were BONES, CASTLE and CHUCK. Boy, I was so wrong. Hv never seen an episode of NCIS before. Was googling the reviews on the top tv shows and found alot of positive reviews on NCIS. We thought it was a military series and did not paid too much attention until we drop our interests on BONES. and needed to find another outlet of 'whodunit/spy' while waiting for the coming out new season of CASTLE and CHUCK. After reading reviews on NCIS, I bought the the box set of 1-8 and started watching after Thanksgiving hols. I was totally hooked after the 1st season! Now my husband is addicted too! Each of the main characters have endured themselves to us ... so well played ... the comaradrie and chemistry are undeniable. Gibbs, DeNozzo, Ziva, McGee, Cate (1st to 3rd season), Abby, Ducky, even Palmer .....each of them are fabulous!. Almost finished Season 8. Never, have we been so addicted to a tv series before. Is like watching a never-ending 'Jason Bourne' series. Just could not wait till Season 9 comes out. Fantastic writing and plots. OORAH for sure!
5 people found this helpful
See all reviews
Back to top
Get to Know Us
Make Money with Us
Amazon Payment Products
Let Us Help You
EnglishChoose a language for shopping. United StatesChoose a country/region for shopping.
© 1996-2022, Amazon.com, Inc. or its affiliates