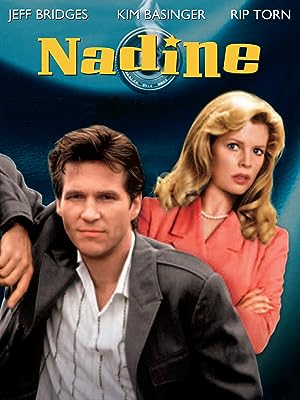 Beth HarmonReviewed in the United States on August 16, 2015
4.0 out of 5 stars
Kim Basinger shines in the title role.
Verified purchase
Kim plays a nearly divorced hairstylist desperate to retrieve some nude photos of herself that she posed for in a weak moment. Unfortunately she chooses the worst possible moment to confront the photographer (played by Jerry Stiller) over the matter at his studio....no sooner does she go there to talk to him when she unwittingly hears him getting murdered after he hides her in the back room of his office.

In the midst of this Nadine also has to deal with the fact that she is carrying the child of her soon-to-be-ex-husband Vernon (Jeff Bridges), a down-on-on-his-luck bar owner who is in serious financial straits and also happens to have a new girl on the side.. All that takes a back seat however when they both find themselves at the mercy of Buford Pope (Rip Torn), an unscrupulous and ruthless businessman. He is well aware that Nadine was there at the time of the murder and is after a map (involving a road scheme worth loads of money) that she unwittingly took with her when she fled the scene and the map that Vernon snatched back at her place.

From then on Vernon and Nadine have to fight to save their lives as well as their marriage as Pope and his crew set out to get the map back and eliminate any and all loose ends (meaning the two of them).

I always felt that Kim Basinger was underrated as an actress and she really shines in the title role. Rip Torn makes an excellent and oily villain, he really convinces you that he will do anything, including murder, to get his way and to let nothing and nobody stand in his way.

I love the soundtrack from the movie too.

If I have one quibble with the movie, it's that I just don't see the chemistry between Kim and Jeff Bridges. I mean, I also liked Jeff in here, however my feeling is this: even though the movie gives the impression that Vernon and Nadine will live happily ever after at the end of the movie, nothing has really changed with Vernon's situation. He is still in the financial hole, and Nadine, the more sensible of the two up to that point, has now even started to share his rose colored view of the future. I'm all for happy endings, but even I can't help but feel that despite the optimistic climax they're still going to have serious problems to have to work through.

Having said that I still feel it's a highly enjoyable film.

Jacob CherianReviewed in the United States on May 20, 2013
5.0 out of 5 stars
NADINE fun and irresistable comedy romance film
Verified purchase
Nadine Hightower(Kim Basinger) and her husband Vernon Hightower(Jeff Bridges) are in the process of getting divorced, but get back together again to retrieve nude pictures of her from a photographer`s studio, but get them mixed up with the plans for a land development scheme that could make them a fortune, because the photographer got killed by a shady businessman(Rip Torn) and the photographer gave Nadine the plans instead of the photos before he died. The killers are now after Nadine and her husband who have to get the photos and keep the plans and prevent themselves from getting killed in this fun, exciting, romantic ,1950`s style adventure comedy.
3 people found this helpful

Danille WorthenReviewed in the United States on September 1, 2020
5.0 out of 5 stars
Good clean fun.
Verified purchase
My dads favorite movie. Its good clean fun and will always be a sentimental favorite of mine.

David E. BaldwinReviewed in the United States on July 22, 2005
3.0 out of 5 stars
Breezy Entertainment
Verified purchase
"Nadine" is an example of the quirky choices that distinguishes Jeff Bridges from his peers. It's also an example as to why Bridges is not as big a star as he should be. "Nadine" is not a bad film, far from it. It's just so...slight. It goes down easy like a bottle of Lone Star beer but you've forgotten it an hour after you've digested it. This is really surprising considering not only the talent in front of the camera but also the presence of Academy award winning director Robert Benton behind it. That said, Bridges and Kim Basinger have good screen chemistry that make the film eminently watchable. Good art direction depicting Austin, Texas circa 1954 and cinematography from master lensman Nestor Alemendros. The bottom line is that this is a good film to pass the time as the summer wanes.
6 people found this helpful

Thomas F HallReviewed in the United States on February 28, 2019
5.0 out of 5 stars
One of my favorites
Verified purchase
Love the characters, the writing, the acting. It is funny, fresh and not violent.

Amazon CustomerReviewed in the United States on March 8, 2021
5.0 out of 5 stars
Great Movie!
Verified purchase
This movie was largely overlooked when it was released in the mid 1980s. It is a great date night movie. Kim Basinger and Jeff Bridges have great chemistry, and it is unfortunate that they have not appeared in more movies together.

Beverly EnwallReviewed in the United States on September 11, 2014
4.0 out of 5 stars
If you like country humor
Verified purchase
If you like country humor, this is a fun movie. The excellent cast is an assortment of small town Texas characters, well portrayed as authentic people, not cartoons – even the baddest bad guy while close to the edge for stupid, avoids clownish. The story is believable with many unexpected twists and turns. To me, this is a very entertaining film.
See all reviews
Back to top
Get to Know Us
Make Money with Us
Amazon Payment Products
Let Us Help You
EnglishChoose a language for shopping. United StatesChoose a country/region for shopping.
© 1996-2022, Amazon.com, Inc. or its affiliates