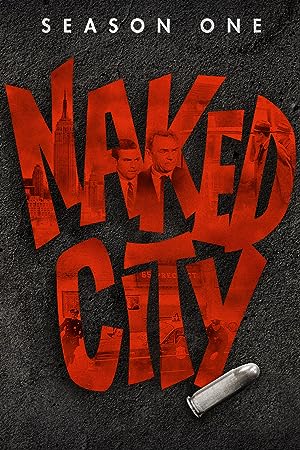 (52)
8.319597+
THERE ARE EIGHT MILLION STORIES IN THE NAKED CITY... One of the most innovative police shows in television history, and hailed by Time magazine as "not just another cop show," NAKED CITY puts a human face on crime, going beyond a simplistic portrayal of good vs. evil to delve into the complex personal dramas of the people involved.

JSReviewed in the United States on June 18, 2014
5.0 out of 5 stars
"Fire Island"
Verified purchase
“Fire Island” is the story of a band of bootleggers who confront the NYPD at the title location. I don’t want to overhype a simple half-hour cop drama, but I see ”Fire Island” as a model of crisp, artful, evocative storytelling. Student filmmakers would do well to study the visual and narrative skill on display here.

The unique element of this episode is the setting, which is a far cry from the series’ usual jumbled urban landscape. The main location is the bootleggers’ hideout, a boarded-up shack surrounded by hard sand and seagrass. The only approach to the house is a narrow wooden walkway, and where the walkway meets the house, a belt-fed World War II machine gun has been mounted behind a barrier of sandbags. The gun is manned day and night by a psychopathic guard hired by the bootleggers to protect their still. The scene is surreal. The outsized gun and its trigger-happy attendant are a force that is all out of proportion to what it is being guarded; and the shack seems too remote to be threatened by anyone. The wooden walkway becomes a passage to hell, and only one of the people from the shack makes it out alive.

The mise-en-scene is stripped down, almost abstract. Besides the house and its desolate environs, all we see are winter beaches and water —a wonderful Dali-esque backdrop for cops in long overcoats and wide-brimmed hats. I get a little shiver when Lieutenant Muldoon looks across the water at a faint grey shape and says, “That’s Fire Island out there, isn’t it?” He might as well have said, “I will show you fear in a handful of dust.”

At the heart of the episode are the tensions that play out between the people in the shack: an old man, his grandson, a hired hand, and the crazy guard. The grandson is disturbed by his grandfather’s decision to bring in the guard, who becomes more of a menace to the bootleggers themselves than to any would-be intruders. This is a sharp little drama about the tensions between family and the cruel world outside…or the consequences of making a deal with the Devil—whatever. The real draw here is the art of figures moving on a landscape.

Al AReviewed in the United States on January 22, 2021
5.0 out of 5 stars
Great stories.
Verified purchase
The first season of Naked City is excellent with great stories and the local setting in old school New York is great. The episodes are only half hour episodes but are very well written and acted.

SternoReviewed in the United States on April 26, 2021
5.0 out of 5 stars
Excellent!
Verified purchase
Excellent series from the early days of television.

Rosemary's BabyReviewed in the United States on December 1, 2014
5.0 out of 5 stars
First Year one half hour but a long half hour not 21 minutes
Verified purchase
I bought the old versions some were in bad shape but this the quality is fantastic. I love this series, sad that it went only four seasons, but the big city life filmed right there in New York was great wish they do more of that, they sure do it here in Los Angeles.
One person found this helpful

J. BertramReviewed in the United States on July 5, 2014
4.0 out of 5 stars
NYC in the fifties
Verified purchase
I first watched these with my bride on our 14 " TV with our '55 Olds Starfire convertible in the driveway. The harbor and NYC skyline
before the trade center was built are fascinating. The cars are "wrap around windshield" mid 50's models and worth the price of the DVD set. Most of the scenes were shot right on the streets. Great stuff!!
9 people found this helpful

connieReviewed in the United States on September 12, 2014
5.0 out of 5 stars
I STILL ENJOY THEM.
Verified purchase
I REMEMBER WATCHING THESE TV SHOW WHEN I WAS YOUNG...I STILL ENJOY THEM...THEY ARE 1/2 HOUR SHOWS SHOWING THE NEW YORK CITY POLICE DETECTIVES SOLVING CRIME IN THE CITY...IT WAS AND STILL IS GOOD TV...REALLY GOOD FILM NOIR IN A WAY..TOTALLY ENJOYABLE...
One person found this helpful

arleneReviewed in the United States on March 11, 2018
5.0 out of 5 stars
Naked City
Verified purchase
So glad to be able to have another James Franciscus series.
One person found this helpful
See all reviews
Back to top
Get to Know Us
Make Money with Us
Amazon Payment Products
Let Us Help You
EnglishChoose a language for shopping. United StatesChoose a country/region for shopping.
© 1996-2022, Amazon.com, Inc. or its affiliates