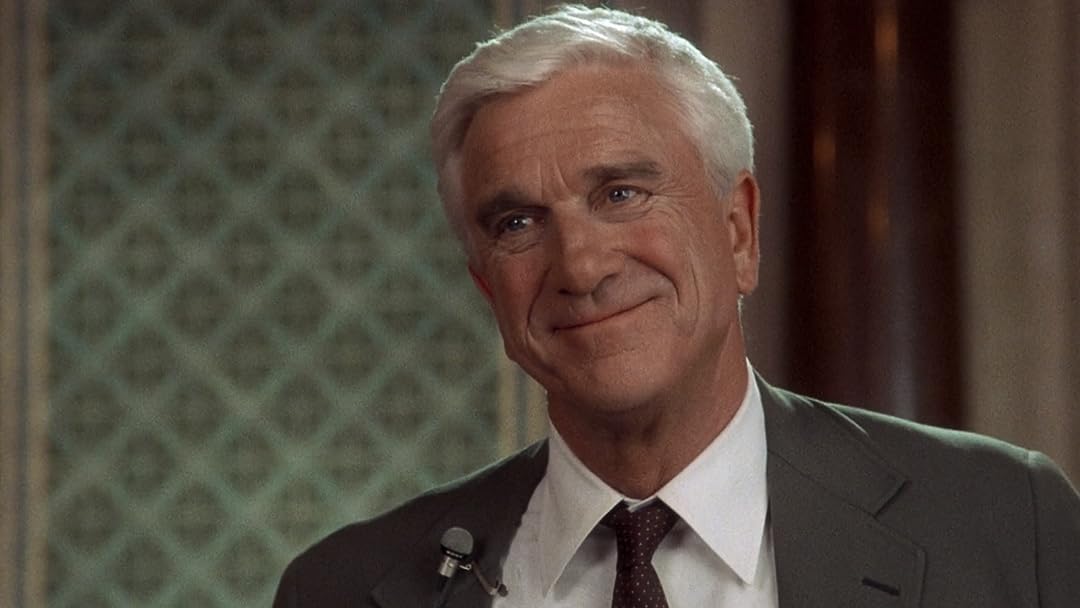 The Naked Gun: From the Files

The All-Seeing IReviewed in the United States on January 22, 2020
5.0 out of 5 stars
So Ludicrous, So Legendary
Verified purchase
Before the '90s gave rise to The Dude from [[ASIN:B002KEZ96Y "The Big Lebowski,"]] and the 2000s gifted us [[ASIN:B0042QZSRS "Borat"]], there was "The Naked Gun" and Frank Drebin, played with the straightest straight face by the remarkable Leslie Nielsen. "The Naked Gun" comes from the ancestory.com chart first hinted at by [[ASIN:B00FW1CEPG "Kentucky Fried Movie,"]] most readily identified by the mighty [[ASIN:B001K37CT8 "Airplane!,"]] and recently carried on by raunchy record label satire [[ASIN:B07JVSYPZ7 "Stadium Anthems."]]

Gags in "The Naked Gun" rain down like biblical flood; some high-brow, but most gloriously inane. It takes geniuses to create such elevated absurdity.

Is "The Naked Gun" somehow better than its "Airplane!" forefather? By a nose, the vote is "yes." While "Airplane!" also features Nielsen as a doctor (he's even more deadpan than Drebin), that film's lead actor was the adequate Robert Hays, whereas "The Naked Gun" gives us Nielsen as the humor's prime courier. This is one of the greatest comedies in the history of film. - (Was this review of any use to you? If so, let me know by clicking "Helpful." Cheers!) - WATCHED IT? THEN WATCHLIST: [[ASIN:B0085OEIOC "Top Secret!"]] [[ASIN:B07JVSYPZ7 "Stadium Anthems"]] and [[ASIN:B004EFBC9U "Hot Shots!"]]

mmthraxReviewed in the United States on January 19, 2017
5.0 out of 5 stars
Classic. Watch it again and again.
Verified purchase
This movie is greatness on a plate. Is the humor new? No. Get Smart and Airplane was ahead of Frank Drebin but that's not the point. I actually remember seeing the Police Squad series in its first run. Hilarious. Leslie Nielsen sells this character the same way Don Adams did. When something goes awry, he is not bothered. He is immediately on to the next deal. The sight gags, the wordplay. There is a lot to keep track of and watch for. That means you can watch the movie six times (if you like this humor, you will, if you don't, you won't make it through the movie at all) and you will still see another gag lurking in the background. Sometimes the gag is right there, but you missed it because you were laughing so hard. This movie is a classic. Period.
6 people found this helpful

Even to this day, I cannot help but think of Leslie Nelson's butchering of the national anthem while I watch major league baseball games. "The Naked Gun" is one of those movies which has dozens of memorable lines and scenes which you can recall easily with your friends. It is also one of those movies that if you could read the script, you can visualize the bumbling police lieutenant Frank Drebin (Leslie Nielson) acting, and you laugh just as hard reading the script as you would watching the movie.

How can anyone forget Frank Drebin's comment about Queen Elizabeth visiting Los Angeles:

Lt Drebin: "Thank you your honor. Protecting the safety of the Queen is a task that is gladly accepted by Police Squad. For no matter how silly the idea of having a queen might be to us, as Americans we must be gracious and considerate hosts. (The crowd applauds, camara pans to Mayor's a gasped expression as she takes over the podium from Lt. Drebin.)

Of course this is followed by the sounds of Lt Drebin's "long pee" scene audio drowning out the Mayor's continued speech when he forgets to remove his wireless microphone while relieving himself in the men's room. Of course, it only gets worse for the Mayor as Lt Drebin completes his potty break soliloquy with a cascading audio of a few short squirts, and lyrical humming. Lt Drebin completes his audible peeing soliloquy finale by breaking wind and a self satisfying "Aaaaaaah" broadcast to the entire press conference.

SylviaReviewed in the United States on June 21, 2016
5.0 out of 5 stars
Hilariously funny!
Verified purchase
Simply hilarious! This is in direct line with the Zucker brothers. Again, their mom are always in their movies, and I do love to see her in them. Leslie Nielsen is so comely as a comedian he doesn't know if he did anything wrong or not. Which makes it more hilarious! lol In any case, be prepared to laugh because the actions and puns are shown one after the other. And you do have to watch the movie to view them. If you want to laugh and not be depressed, this is definitely the movie to watch. And by the way, this is the 1st of the series of the Naked Gun series. Make it a Naked Gun movie night! :-)
3 people found this helpful

marinReviewed in the United States on January 21, 2022
5.0 out of 5 stars
Ludicrous and fun–enough said.
Verified purchase
Certainly in the category of screwball comedy. I love this stuff. These days getting a laugh has More value than ever. Snort. Definitely not subtle not sophisticated Which is its charm. No deep thinking here; park your brain at the door and just Laugh like a kid— enjoy the hijinks.I’ll be back to add more astute observations but only if I can watch it again for free.🤓. I am honing my inner critic so she stops working on me and goes for the shows.

AlexReviewed in the United States on April 17, 2018
4.0 out of 5 stars
OJ SIMPSON RUINED THE AFTER CINEMA LIFE OF THIS ONCE GREAT MOVIE. STILL FUNNY AS HELL THO!!! NICE BEAVER!!! LOL
Verified purchase
Still funny 28 years later. You know I was thinking watching this, I bet OJ SIMPSON did residual damage to the after cinema revenue to this flick.

Ppl HATE OJ in the United States and for good reason. He's a walking MURDERER. It's so messed up. And he play's a somewhat meaty role in this movie.

I know this is true about OJ affecting ppls reactions post his acquittal because 4 ppl mentioned how they "despise OJ" when i discussed the movie at work recently.
3 people found this helpful

Michael K. BeuschReviewed in the United States on March 19, 2001
5.0 out of 5 stars
Nice beaver!!
Verified purchase
The Zucker-Abrahams-Zucker team has given us hilarious classics like The Kentucky Fried Movie, Airplane! and Top Secret. However, for me, The Naked Gun is the best of the lot and is one of the funniest films ever made. I was a huge fan of the TV series Police Squad. Unfortunately, ABC did not really give the series a chance and axed it after one year. One of the series' original gimmicks was to have a "guest star" who was killed off during the opening credits (Florence Henderson was machine-gunned, William Shatner was poisoned, Lorne Greene was thrown out of a speeding car, etc.) Unfortunately, one of the "guest stars" was John Belushi, who died before the episode could be aired. The producers had to pull the episode as a result. This was the final blow for the series which was canceled soon after. The series Sledge Hammer feebly tried to cover the same ground, but paled in comparison to Police Squad.
That's why I was overjoyed when the movie came out in 1988 and was even funnier than the original series. Zucker/Abrahams/Zucker take the Mel Brooks approach of cramming every one of their movies with jokes, knowing that a good percentage of them will hit their mark. The jokes in The Naked Gun, however, ALL seem to work.
Leslie Nielsen, who was a serious dramatic actor until Airplane! made him into a comedy star, is hilarious. Without trying to be funny, Nielsen gets laughs by playing it absolutely straight -- even when he's wearing a body length condom, passing out by smelling 3 year old Chinese food or singing a horrible version of the National Anthem at a baseball game. Zucker/Abrahams/Zucker use the Leslie Nielsen theory of casting to the hilt in Naked Gun. Non-comedy stars like George Kennedy, Priscilla Presley, O.J. Simpson (when he could show his face in public), Reggie Jackson and Ricardo Montalban have mastered the art of delivering funny lines with absolute seriousness.
It would take too long to recount all of my favorite scenes. My personal favorite is the baseball scene. If you're a baseball fan, you've probably seen a person singing the National Anthem botch the lyrics or seen an umpire who seemed to get a little too much pleasure in ringing up strike three on a hitter. The humor may be extremely exaggerated, but Zucker/Abrahams/Zucker base the scene on real situations, thereby making the humor even more hysterical. The first time I saw the film, I was laughing so hard, tears were coming out of my eyes and I couldn't breathe during that scene! Apparently, the audience I saw it with agreed because their laughter drowned out a good deal of dialogue. Nielsen's umpiring still makes me laugh, especially when it's shown between innings at a baseball stadium.
The DVD transfer is excellent, but the real advantage of the DVD edition is the hilarious commentary of David Zucker. So many directors, when they provide audio commentary for one of their films on DVD, act so pompous and self-important you would think they had done something noble for mankind rather than just direct a movie. Zucker, however, has a great self-deprecating style that fits the film perfectly. It's quite clear that he has as much fun making these films as we have watching them.
5 people found this helpful

K. KouisReviewed in the United States on December 27, 2004
4.0 out of 5 stars
description
Verified purchase
As a staunch advocate for children, Dan West has throughout his many years dedicated his life to the protection of our most precious resource, our children. Dan has teamed with a group of professionals who share his values and beliefs to produce this high quality, easy to understand video using 911 re-creations to highlight the importance of gun safety.

This a video for the whole family, children and adults alike. With a running time of approximately 25 minutes, this video could quite likely be the best 25 minutes you could ever share with your children. Protect the future. Protect your children.

Dan West is a professional firearms instructor who has served as a bodyguard for many high profile political and public figures as well as a 2-time combat veteran of the United States Marine Corps. He currently holds national seminars on gun safety and tactical training.

They have drawn upon their years of actual experience and have brought gun safety scenarios suitable for all viewing audiences. 1 out of every 3 homes in America has a gun of some type and coming into contact with one can happen at almost any time.

By knowing the five basic safety rules of gun safety, whether you own a gun or not, will prepare you for the time that you or a loved one comes into contact with a gun. "Knowing these safety rules will never hurt you, not know them can."
2 people found this helpful
See all reviews
Back to top
Get to Know Us
Make Money with Us
Amazon Payment Products
Let Us Help You
EnglishChoose a language for shopping. United StatesChoose a country/region for shopping.
© 1996-2022, Amazon.com, Inc. or its affiliates