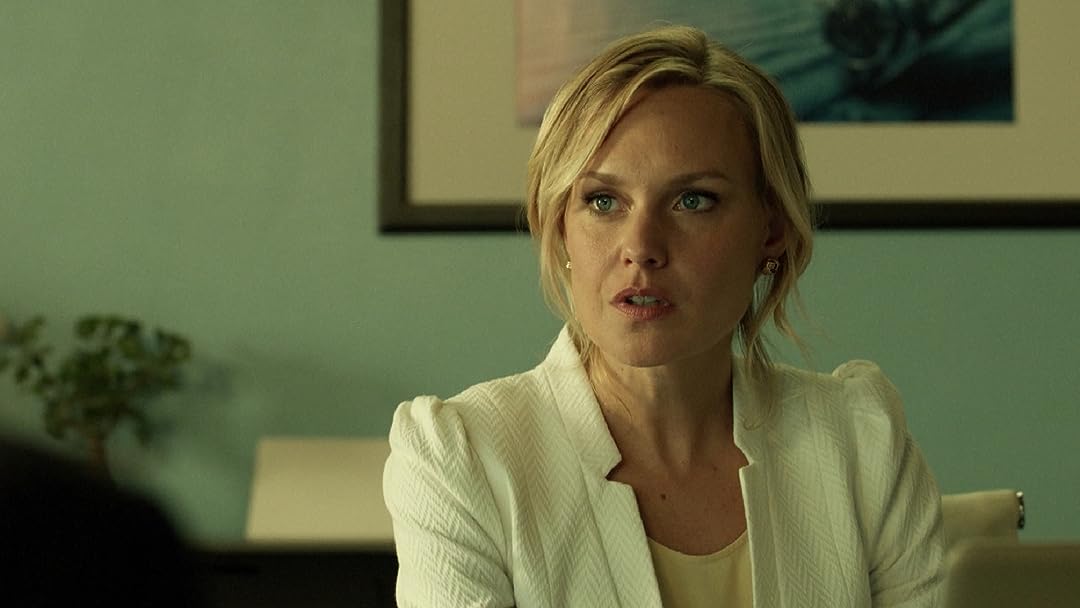 (132)
5.51 h 31 min2015NR
While celebrating their anniversary, Linda and Mark get called home early when their five-year-old daughter Chloe gets injured while under the care of an elderly nanny. It becomes clear that a new nanny is needed, and that's when Heather enters their life.

Kira S.Reviewed in the United States on March 7, 2021
3.0 out of 5 stars
Not the best, not the worst
Verified purchase
I like India Eisley, even though the range of emotion she shows in her acting is limited. This is the third or fourth movie I've seen of hers, plus seeing her in The Secret Life of the American Teenager (she played the seldom-seen younger sister of Shailene Woodley's character). This is not her best film. She has a few good scenes. She is best when she is menacing, like when she intimidates the little boy on a tricycle and when she threatens the former babysitter who has dementia. She was unconvincing in her attempts to seduce the husband, and the rest of the time she had pretty much resting you-know-what face (Amazon will not allow the b-word). The plot - typical babysitter wants to disrupt family, although the reason, which comes out at the end, at least makes sense. I agree that it is extremely unlikely that ***WARNING SPOILER*** she got up and walked away after a three-story fall, especially the way her leg was bent. And ***WARNING MAJOR SPOILER*** even if she survived the fall, chances are the baby wouldn't have, at that early stage. But if you start applying logic to horror or psychological suspense films...well, just don't because you'll lose every time.
One person found this helpful

Aiex HaloReviewed in the United States on December 19, 2020
2.0 out of 5 stars
Dumb unintentional comedy
Verified purchase
To start, there is something about this movie, just in the way it's shot, the music, the acting, that gives me very strong vibes of being something that Tommy Wiseau's "The Room" would have aimed for if Tommy Wiseau weren't a comic genius.

This film is unfortunately a genuine attempt at a straight-forward suspense thriller, and this is tragic because it ends up being unintentionally hilarious at so many points.

A couple, Linda and Mark, with a five year old daughter, Chloe, have an incident where their nanny has dementia and Chloe accidentally burns herself a little on boiling water. Both parents work so they need a nanny and one teenager who is absolutely perfect for it, Heather, shows up practically begging to be the girl's nanny.

From there, it follows all the usual predictable twists and turns of a "femme fatale usurper" type plot with the nanny obviously outdoing the mother when it comes to being a parent and a wife, only done with such huge lapses in logic that it almost feels like the entire movie were written and directed by an actual teenager with no real sense of how the world actually works.

This lapse of logic ranges from very small and stupid things (like police pulling over a woman in her car and not letting her make any calls whatsoever) to really suspect (like the father of the girl showing a complete stranger increasingly unusual photographs of his daughter in less and less clothing and leering like a pervert) to just really dumb nonsensical idiocy (like the nanny drugging and raping Mark and everyone just immediately forgetting it).

The "twist" at the end is so stupid it's almost genius. The least I can say is that it's extremely realistic that someone seeking out someone else based on extremely minimal information ends up not finding the right person and I greatly appreciate this being recognized.

TomHunter1968Reviewed in the United States on April 10, 2015
3.0 out of 5 stars
A promising start leading to a ridiculously disappointing ending. Wait for Netflix or Amazon Prime.
Verified purchase
I think this one is a good example of a thriller that almost pulled it off, but just fell short (especially at the end - pardon the pun). It's a good example, I think, of where a director with a bit more imagination and perhaps a bit more latitude as far as pushing the envelope in this story could have paid off big time. Perhaps in the hands of a more experienced team - especially one who'd worked in the horror genre, ideally - this movie could really have been something interesting, as it did have all the parts to build a really fun thriller. But, instead, it ultimately turns out to just be - particularly at the end - a frustratingly silly disappointment.

India Eisley plays an 18-year-old seductress-babysitter, much like (in fact, very much like 1992's "The Hand That Rocks the Cradle" and other "babysitter-gone-bad" thrillers, though India is more of a teen-hottie-temptress in this updated version. And actually the strength of this film is in her performance, as the other two primary characters, the mom and dad, turn in very bland, forgettable roles (kudos to the child who plays the young daughter, though, as she did a great job). Really the only bright spot in Nanny Cam is India's performance, which is why I've given this one three stars instead of one or two.

I think I can recommend this for a single viewing, but I'd certainly suggest waiting until it comes out on Netflix or Amazon Prime. I definitely can't recommend spending your hard-earned entertainment budget on this one.

So what really kills this film? The ending. The movie stars out fairly strong and keeps going up until about the final one-third of the story. The tale cascades from what might have ended in an interesting twist, to the ridiculous and ruined the film entirely, for me, anyway. In fact, it was quite absurd, with her Michael Meyers-like disappearance from the lawn after a three-story freefall from a house. Then, for some reason, the filmmakers chose to further tack on an additional scene at the end - India donning a wig and hopping on a plane with a new baby - AFTER the already-silly ending they'd provided. Essentially, the ending is a twist-twist-twist, if that makes any sense, with each of them removing the film more and more from the believable.
15 people found this helpful

Brian A. BergmanReviewed in the United States on June 11, 2019
4.0 out of 5 stars
India Eisley is riveting
Verified purchase
India, the daughter of Olivia Hussey, is a star in her own right. This movie is all about her as she charismatically owns the screen. Some of the story line jumps the shark but go with it and you will enjoy it. Also see India in a completely different role in TNT's I am the Night." which is a sort of sequel to the the Black Dahlia case of the late 1940's based on a book written by Fauna Hodel. Also see India in a very dark somewhat horror movie about a magic mirror. You guessed it, I am a fan. The movie is a 3 but India is a 5.
One person found this helpful

dewdropvelvetReviewed in the United States on August 14, 2016
3.0 out of 5 stars
Some great performances, not sure about the ending, but overall pretty good
Verified purchase
Pretty good. The double twist at the ending kind of messed things up. It needed a stronger director or something, or someone like Shonda rhimes, who knows how to push limits and make things gut wrenching. Enjoyed India Eisley very much; I also loved her in Secret Life. Hope to see her in more soon. I can't decide if the mother of Chloe, Linda, clashed with India or if the clash was just right. I kind of liked how different these two females were, but it added a lot of strain to all the linda/heather scenes. Perhaps the tension kept things interesting, or perhaps it made things less organic; i'm not sure how it would have played with a more easygoing casting for the mom. The little girl playing chloe also gave a stellar performance. The husband was good too, tho the little girl and the babysitter were the most notable. The actress playing linda was good, but like I said, I'm ambivalent about how she was with Heather (so judgemental, then warm but always edgy).

Good for a lifetime flick. 3.5 maybe

Would have preferred it if she had been Linda's daughter. Also, poor old lady! Wasn't it over the top, I.e. perhaps too campy to have her killed?
2 people found this helpful

Thadius the trutherReviewed in the United States on April 29, 2015
4.0 out of 5 stars
India Eisley with a high budget performance in a low budget film.
Verified purchase
This movie is average for a high budget film, but if you enjoy "straight to tv" movies, you will really find this enjoyable. The movie starts strong but seems to get very iradic going forward with some questionable plot holes, but it is entertaining enough you won't look at the clock to see how much longer. Tough to say much without any spoilers and the trailer gives a good premise to the film, with some M Night Shyamalan type twists (may not be a good thing). India Eisley though plays the role so well, that I would bet money she will be a huge star soon. Very great performance on her part. The others in the cast were pretty meh.
3 people found this helpful

KatonicReviewed in the United States on September 12, 2016
5.0 out of 5 stars
great young actor
Verified purchase
This young lady did a wonderful job acting. This movie was interesting I was never bored,i considered it as a drama with thriller thrown in and very realistic story and not over played in Hollywood. You ever watch new movies and think,have I seen this? Or you know what's going to happen because it is a remake of several others? Well even tho I could put together and asume what would take place based on name,cover,previous I still was very into this movie and surprised by the innocence of the actor and the things she did. Good movie.
One person found this helpful

ltraReviewed in the United States on October 23, 2021
5.0 out of 5 stars
be careful who you invite into your home
Verified purchase
I really liked this movie it kept me on edge from the very beginning my favorite kind of shows be sure and watch the ending my jaw dropped WOW! i recommend this show
See all reviews
Back to top
Get to Know Us
Make Money with Us
Amazon Payment Products
Let Us Help You
EnglishChoose a language for shopping. United StatesChoose a country/region for shopping.
© 1996-2021, Amazon.com, Inc. or its affiliates