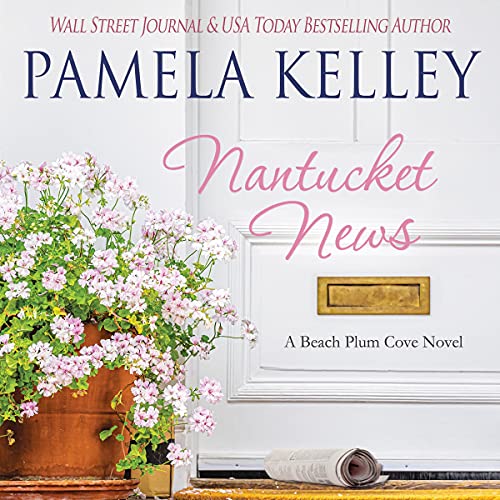 Charleston native, Taylor Abbott, has just relocated to Nantucket for her dream job as a junior news reporter at the local paper. Ten years ago she was Abby Hodges' college roommate and is looking forward to living near her best friend again.

Until her rental cottage is available, she's going to stay at the Beach Plum Cove Inn, Abby's mother's bed and breakfast.

Abby, meanwhile, is dealing with an issue she thought she'd resolved.
Rhett discovers someone that works for him is a thief and tries to figure out who it is.

Rumor is, there's a celebrity or two on the island, and the media (including Taylor's coworker, Victoria), is in hot pursuit to track them down.

Special invitation from Audible!
Learn more about Membership
List Price: $19.95
You Save: $6.96 (35%)
By completing your purchase, you agree to Audible’s Conditions Of Use
Sold and delivered by Audible, an Amazon company
Share

4.5 out of 5 stars
4.5 out of 5
3,130 global ratings
How are ratings calculated?
To calculate the overall star rating and percentage breakdown by star, we don’t use a simple average. Instead, our system considers things like how recent a review is and if the reviewer bought the item on Amazon. It also analyzes reviews to verify trustworthiness.
Top reviews

CC
5.0 out of 5 stars The best in the series
Reviewed in the United States on September 22, 2021
Verified Purchase
I love anything by Pamela Kelley but this series is the best. This one is the best in the series but then I say this ever time I read the newest. Taylor’s character is a great addition and always nice to have one so likeable. I love books with multigenerational women as are most of Pamela’s so please don’t end this series and let us know the name of the next one coming.
Buy this book worth every penny in enjoyment and I agree don’t read hungry!!
Read more
8 people found this helpful
Helpful
Report abuse

LJ
5.0 out of 5 stars Another Sweet Nantucket Romance
Reviewed in the United States on September 21, 2021
Verified Purchase
Pamela Kelley returns us to Nantucket and the Beach Plum Cove Inn. In addition to checking up on the Hodges family, the story follows newcomer Taylor who has joined the local newspaper as a reporter. (She was also Abby's college friend.) She is learning the ropes and has a crush on her boss, Blake, but does not want to act on her feelings and make things awkward at work. (Plus, he is her boss so it's inappropriate. ) Meanwhile, Rhett is dealing with identifying who is stealing from his restaurant, Cami Carmichael is filming a new movie and trying to keep a low profile, Lisa is contemplating expanding her business, the Daffodil parade is coming up, Abby is trying to get pregnant, Marley is getting more serious with her boyfriend Mark, and there is a new needle shop in town! Enjoy revisiting with old friends and following along with Taylor as she settles in to Nantucket Life.
Read more
3 people found this helpful
Helpful
Report abuse

Sheila C. Siarkiewicz
5.0 out of 5 stars Very enjoyable read!
Reviewed in the United States on October 12, 2021
Verified Purchase
Welcome to Nantucket! This is a book about new beginnings, love, friendship and the bonds of family. I absolutely loved this book! All the characters are great and each has their own personality. The story is very well written. Nantucket News is the latest book in the Beach Plum Cove series. I have enjoyed watching the characters grow and develop from book to book. This is the perfect book to curl up with a mug of tea and just enjoy. It's like going home! I can imagine myself sitting in the kitchen of the bed and breakfast chatting with Lisa and her daughters. This is a must read and I highly recommend it!
Read more
One person found this helpful
Helpful
Report abuse

Jennifer R Shirey
5.0 out of 5 stars Wonderful read!
Reviewed in the United States on September 21, 2021
Verified Purchase
I’m only sad that I finished it and now have to wait for the next one! Another great book. Pamela Kelley makes me want to visit Nantucket and check out all that the lovely place has to offer. Don’t read this book on an empty stomach as you’ll be starving as she describes all of the delicious seafood and always gets me with the stuffed mushrooms!!
Read more
3 people found this helpful
Helpful
Report abuse

Laurie M.
4.0 out of 5 stars Love returning to Nantucket!
Reviewed in the United States on October 19, 2021
Verified Purchase
After reading the first six books in the Nantucket Beach Plum Cove series, I eagerly awaited Nantucket News, and I was not disappointed. It was great to re-connect with the Hodges family and the other characters that bring life to these stories. The characters are multi-dimensional, and the dialog and situations are realistic and entertaining. And then there's the food...mouthwatering! I gave this book four stars instead of five because, as other reviewers have noted, there were multiple typos, merged words, and a few plot glitches. I would happily proofread or be one of Pamela's ARC readers to help catch things that slow down the flow.
Read more
Helpful
Report abuse

NanaCav
5.0 out of 5 stars *** Love, love, loved it!!! ***
Reviewed in the United States on September 29, 2021
Verified Purchase
Nantucket News will grab you from the first page and not let you go until the last page is read. Pamela Kelley has you feeling you are right there in Nantucket and all the characters are your friends. There is much going on to captivate you and you know that this author never disappoints. I loved every minute of Nantucket News!
Read more
2 people found this helpful
Helpful
Report abuse

R.H. McCort
5.0 out of 5 stars Enjoying all this series
Reviewed in the United States on October 22, 2021
Verified Purchase
In this wonderful series written by Pamela Kelley we find Taylor Abbott, who moved to Nantucket from Charleston and was a roommate of Abby Hodges. So once again we get to meet Lisa, Kate, Rhett, Chase and the rest of characters of this series. Taylor has accepted a job as a reporter for the local paper and Taylor is staying at the Beach Plum Cove Inn till the rented cottage is available. Another great addition to the series and hopefully many more to come
Read more
Helpful
Report abuse
See all reviews

Womanoftheweald
5.0 out of 5 stars Hot Off The Press
Reviewed in the United Kingdom on September 29, 2021
Verified Purchase
Pamela Kelley’s latest book, Nantucket News is a must read for those that like the warm buzz of a Hallmark movie on a winter evening. This most recent offering from the prolific Pamela Kelley is part of her Beach Plum Cove Inn séries, detailing the lives of Lisa, her daughters and their delightful bunch of friends on the beautiful island of Nantucket. It’s a warm hug in book form! Thank you, Pamela…
Read more
Report abuse

Myra McMillan
5.0 out of 5 stars Brilliant
Reviewed in the United Kingdom on October 17, 2021
Verified Purchase
I love all of your series I can’t wait for the next one I hope you do another one for the restaurant series as well I just love them all I never want the books to end ❤️
Read more
Report abuse

ClaSyl
5.0 out of 5 stars Pamela Kelley Has Done It Again!
Reviewed in Canada on October 22, 2021
Verified Purchase
Pamela Kelley has done it again! It's really great to visit with the cast of characters that she created over the years. I feel like I know them. Her stories are interesting. The setting on Nantucket is my favorite place. The food she describes sounds amazing. This is a feel-good story with just enough suspense to keep it interesting. All in all a great series. This is book 7 and I can't wait for # 8! I believe this should be a tv series. I listened to the audiobook and the narrator Leslie Howard has a very pleasant voice. Thank you NetGalley and Dreamscape Media for this advanced copy.
Read more
Report abuse
See all reviews
Back to top
Get to Know Us
Make Money with Us
Amazon Payment Products
Let Us Help You
EnglishChoose a language for shopping. United StatesChoose a country/region for shopping.
© 1996-2021, Amazon.com, Inc. or its affiliates