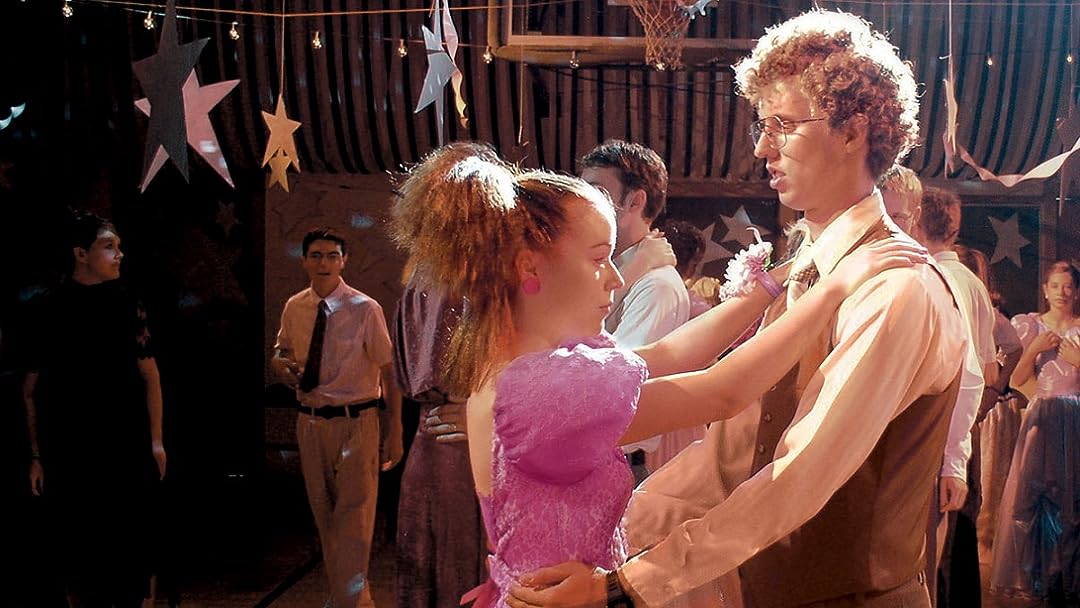 (21,817)
6.91 h 34 min2004X-RayPG
A listless and alienated teenager decides to help his new friend win the class presidency in their small western high school, while he must deal with his bizarre family life back home.

KTKTReviewed in the United States on March 31, 2018
5.0 out of 5 stars
A special memory provided through a great movie
Verified purchase
I try to get my son to watch quality movies all the time and he won't. One night, I said, "Do you want to watch Napoleon Dynamite?" without even looking up from youtube, he said "No, you made me watch Bill and Ted's and I hated it." There is no accounting for taste in most instances. But, I started the film, he heard it playing (which was amazing as he never hears "Take out the garbage" even when he isn't watching youtube and is looking directly at me), and came out to join me. He loved it. My payback for this moment of bonding was to have the lines repeated back to me for weeks on the way to school, the way home from school, at dinner, through the bathroom door, and get responses in the Napoleon style whenever I asked him to do anything. Who said 15 year olds aren't fun?
154 people found this helpful

Anthony RReviewed in the United States on November 11, 2018
5.0 out of 5 stars
The one, the only.
Verified purchase
Some people will not like this film. Those people MAY not be any fun. I would say though that I cannot imagine this film translates well to foreign languages. You'll never see a film quite like this one, ever. If you don't like it, look deep in to yourself and seek out why.
53 people found this helpful

JimmJamesReviewed in the United States on June 7, 2019
5.0 out of 5 stars
Classic
Verified purchase
The first time I watched it, I was like "When is something going to happen?" There was no plot, no story line, nothing.
When it was over, I was like "I can't believe I wasted 2 hours of my life on that"
And, about 2 days later, I caught myself saying the catch phrases and laughing out loud.
Are you drinking 2% milk because you think you are fat? Because you could drink whole milk- if you wanted to"
All the gangs in my school want me to join, because I'm pretty good with a bow staff"
Your mom goes to college
Like anyone can even know that Napoleon.
Anyway, love the movie - it's worth watching again and again

ChrisReviewed in the United States on February 9, 2019
1.0 out of 5 stars
Umm...
Verified purchase
This was spectacularly stupid. Ended up renting and watching it because my daughter's boyfriend wanted to watch it. I had the intention of getting up and finding something better to do after 15 minutes in (like going to bed), but it was sort of like watching a train wreck and I was tired enough that the good judgement portion of my brain apparently had already checked out for the evening.
Overall, the movie was just really kind of sad and depressing. Napoleon seemed like he had just experienced a lobotomy throughout most of the movie. All of the major characters suffered some sort of significant dysfunction. If you insist on watching it, save yourself some time and just skip towards the end when he does his dance routine after Pedro's speech, as that's pretty much the best part. Oh, and might as well watch the wedding at the end. You'll see how things turned out and get to experience the overall cringe factor that the movie exudes all at once!
28 people found this helpful

Thedora PetterborgReviewed in the United States on December 16, 2013
5.0 out of 5 stars
My experiences with Napoleon Dynamite.
Verified purchase
I live in Preston, Idaho and I am a neighbor to Jared Hess. I watched the filming of this movie during the month of July the summer it was filmed in Preston. My grandson attended most of the filming hoping to be seen in the movie. He is in quite a few scenes. A couple of days before the last day of filming I was invited to be the secretary in the high school scene. (a job I held for 17 years). It has been a fun experience especially when we travel and people find out we were in the movie. If they like the movie, we tell them we were in it. If they didn't like it we just move on. Their loss! When I say "we", my husband was with me in the wedding scene and the other person I travel a lot with is the teacher who tells Napoleon on the stage that he needs a skit. Anyway it has been a great adventure. I live across the street from the Llama, Tina and we have had a lot of people stop in to talk about the movie. Lyle, the man who killed the cow lives less that a mile away and I still take family and friends to meet him. Most of the pranks and etc. were actual experiences that took place in Jared's family with his five brothers.
152 people found this helpful

Jose GuevaraReviewed in the United States on January 12, 2022
1.0 out of 5 stars
I only watched the film for 8 minutes.
Verified purchase
I liked the way the opening credits were presented. It was original and I expected a good film to follow with great acting, screen play, and cinematography. To give credit this is a good film student film. And, before writing this review, I've read the other reviews. One of those reviews stated that anyone who doesn't like this film needs to search deep within themselves to figure out why they are not any fun. Which is the biggest laugh I've had from the experience.

The reason I'm giving only one star is based on cinematography, script, acting and good story telling. You might think, well this reviewer is no fun. He only gave the film 8 minutes. Well usually I only give 1/2 a minute to decide if a film is worth it. It's not my attention span is limited. It's that to me I feel insulted if the movie isn't trying to draw me in and giving me entertainment.

Entertainment is basically an escape from my reality into another person's problem or turmoil so I can forget my own. I want to feel captivated. Now for all you "Fun People" who want to waste your time, by all means, here is the perfect film for you.
8 people found this helpful

joel wingReviewed in the United States on April 30, 2020
4.0 out of 5 stars
The ultimate high school outcast finds his place and friends
Verified purchase
Napoleon Dynamite was the ultimate nerd story. Napoleon (Jon Heder) was a total loser at school. He barely opened his eyes when talking. He took the bus to high school with the little kids. He had no friends and regularly got picked on and beat up. This is the tale about how he found his place.

When you start watching the movie you have no idea what it’s about besides Napoleon’s difficulties. The movie is very slow paced and mostly consists of Napoleon’s constant struggles in school.

Then there are suddenly these hilarious scenes thrown in. For instance, he has a date to the dance and his uncle can’t take him so Pedro’s two cousins who have a low rider car with hydraulics picks him up. Then his uncle gets a time machine off the Internet and Napoleon tries it. The only thing it does is electrocute him. There are plenty more events like these interspersed throughout the story.

In the end, you might say that Napoleon Dynamite is akin to John Hughes’ series of films like the Breakfast Club and Sixteen Candles which championed the geeks, the losers, the outcasts as being people too that needed to be appreciated and with just some confidence could do great things. That’s similar to the theme of Napoleon Dynamite.
C
10 people found this helpful

LesleyReviewed in the United States on June 16, 2014
5.0 out of 5 stars
What's it like to be That Guy?
Verified purchase
All the schools I attended had somebody like Napoleon: nerdy for certain, often weirdly hostile, but pretty nice if you managed to get to know them. If you ever wondered what it'd be like to be that guy (or girl), Napoleon Dynamite will show you. It will also make you wince, laugh, clap, and maybe even dance for happiness.

Napoleon's home life is odd: he and his 32-year-old brother Kip live in the Middle of Nowhere, Idaho, with their grandmother and her llama, Tina. Kip stays home "chatting online with babes all day" while Napoleon starts another grueling school year, teased by jocks and bullies, and bossed around by Grandma. But this time he makes two new friends, glamor shot photographer Deb and Mexican transplant Pedro Sanchez. At last, his life starts to change for the better--even after Grandma gets in an accident and creepy Uncle Rico comes to stay while she recovers.

Most people will either love or hate this movie. The dialogue is stilted (for effect, it seems), the humor is subtle, and Napoleon's actions are often puzzling. As with his real-life counterparts, he can be hard to figure out. Yet he's always true to himself, sometimes with bad results. But more often they're good, and by the end of the movie, you understand what he's all about.

The best part of the storytelling, for me anyway, was how the events of the movie just unfold, without judgment or explanation. The director, in other words, doesn't try to tell us what to think--and that's what makes Napoleon Dynamite refreshingly, wonderfully different from pretty much any other teen movie you've ever seen. The neutral perspective may be what caused many critics, including the late Roger Ebert, to pan the film. I guess that's understandable for people who are more used to codified teen films like Ferris Bueller's Day Off, where Ferris's perspective dominates so much that he even tells the audience when to go home.

But if you have even a little weirdo in your personality--and unless you're Summer Wheatley, you do--you might like Napoleon. I sure did. Here's hoping that this style of storytelling will continue to grow in popularity and produce more classic movies.
53 people found this helpful
See all reviews
Back to top
Get to Know Us
Make Money with Us
Amazon Payment Products
Let Us Help You
EnglishChoose a language for shopping. United StatesChoose a country/region for shopping.
© 1996-2022, Amazon.com, Inc. or its affiliates