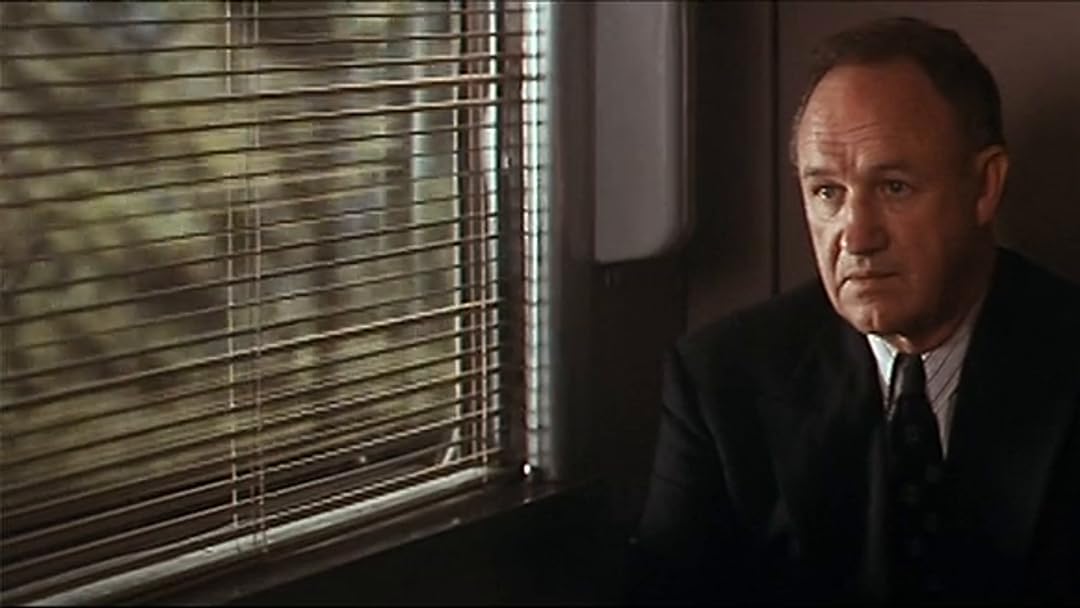 (724)
6.61 h 36 min1990R
A woman secretly witnesses the murder of her blind date by a top Mafia boss and immediately goes into hiding without informing the authorities, but the mafia are on her trail...

BelaReviewed in the United States on December 7, 2016
5.0 out of 5 stars
A remake that is as good if not better than original.
Verified purchase
This remake of the film noir classic is probably one of the best remakes of all time especially since it was made
in the 90's when Hollywood was becoming Hollyweird. I don't think there are many movies from the 90's and
beyond worth watching but this isn't one of them. Hackman and Archer are both great in the roles of the cop
and the witness. It's not exactly like the original but very close. It's well written directed and acted. The pace
is quick and keeps you in suspense thru out. The story takes place mostly on a train which is cool and the
action and ending is done very well. This is a forgotten gem for fans of this genre. A must have.

This is a remake of the classic 1952 film noir movie of the same title directed by Richard Fleischer starring Charles McGraw, Marie Windsor & Jacqueline White. The screen play by Earl Felton based on a story by Martin Goldsmith was nominated for an academy award.

This 1990 remake has a strong cast headed by Gene Hackman and Anne Archer but it was not very successful with audiences or critics. Part of the reason may be silly plot devices such as a helicopter approaching and hovering outside a wilderness cabin unnoticed until an assassin opens fire with an automatic weapon.

I downloaded the movie for free with Amazon Prime and enjoyed it. But I like Gene Hackman and the rest of the cast. And it was free. So four stars.
5 people found this helpful

M. A OberlyReviewed in the United States on July 12, 2020
4.0 out of 5 stars
Kind of run of the mill thriller, but bluray looks great
Verified purchase
Nothing too special about the plot here, we've seen it all before, but Hackman pretty much always delivers, and he's the standout in this.

A witness to a murder needs protected until she can testify. In this case, it involves a train ride through beautiful Canadian territory. The often beautiful camera work covers for a lot of plot holes.

I've always kind of liked this one, even more with this bluray which looks top notch.

If you are a Hackman fan, or just like train movies, this one will probably be something you will enjoy.
One person found this helpful

FredZargunaReviewed in the United States on December 23, 2014
4.0 out of 5 stars
Nice Remake of a Four-Star Fifties Noir.
Verified purchase
The rare film in which the remake is better acted, better plotted, and more plausible than the original.

The original _The Narrow Margin_ is mostly no-names who turn in solid performances. In contrast, this has some big names who do a much better job. As supporting players both Ann Archer and James B. Sikking turn in fine performances, and Gene Hackman does the usual excellent work everybody expects.

Some reviewers claim this film is only "related to" to original 1952 film, _The Narrow Margin_. I beg to differ. They are essentially the same film, although the twists are slightly different at the end, and the setup in the beginning is more suspenseful and much more plausible. Both are four star movies and deserve a view. Unfortunately, this one -- for some reason unknown to me -- is difficult to find.
9 people found this helpful

EdelReviewed in the United States on December 5, 2020
5.0 out of 5 stars
Very good blu ray
Verified purchase
Narrow margin really got the royal treatment as far as the motion picture itself (the bonus are VHS quality). The movie is so crisp in 4K, a real treat! Beautiful countryside and Mr. Hackman is excellent as always.
One person found this helpful

Stone DogReviewed in the United States on April 14, 2012
4.0 out of 5 stars
Average thriller bouyed by Hackman's performance.
Verified purchase
A decent thriller with a simple plot: woman witnesses murder by crime boss, woman flees to a remote location, is approached by district attorney and cop to testify, she and district attorney board train to get to safety, crime boss' assassins board train to kill potential witness.

I thought it was an average thriller with most (but not all) twists and turns very predictable. The idea of being hunted while on a train is not a novel concept (this is a remake and the same theme was used in "North By Northwest") but still works reasonably well (where can one hide or find assistance on a moving train?).

Gene Hackman gives his usual professional performance and lifts the move to a great degree. He's the gritty and tough assistant DA full of sarcastic humor with the ability to improvise (he utilizes a child's toy gun at one point in the film). Anne Archer, on the other hand, was simply not her best in this film and "phoned in" her performance. James Sikking gave a decent performance as a suitably menacing "bad guy".

For the price (I got it here on Amazon for $6.89), I thought it was a decent flick and would recommend it with four stars - especially for Hackman fans.
7 people found this helpful

KatesCarrysReviewed in the United States on December 6, 2012
3.0 out of 5 stars
Did Not Date Well
Verified purchase
This is not a particularly good dvd version of an older movie and I got the
feeling (maybe wrongly?) that some scenes had been cut, possibly for
technical reasons. Seemed shortened.
I preferred my old video version before it got stolen. It seemed to be
crisper with cleaner shots.
Dated because CGI and both camera & technical are so much more
efficient than forty years ago (?) when this was made, so the action scenes
seem slow and without true peril.
However there still isn't an actress like Ms. Archer who can spend nearly
an entire movie in a poorly cut, high neck white tee shirt and still be one
of the sexiest leading ladies, with all her intelligence shining through, her
inner thoughts reading well on screen. Prolly close to one of Hackman's
last leading men pixs. Always very functional with a wide range, still
difficult to get past the sheer age of this plot, which has nothing to really
carry it through to vintage stature lacking both wit and rapport between
the characters nor in the actual premise of the story.

Too bad. But it's not worth more than a C minus.
5 people found this helpful
See all reviews
Back to top
Get to Know Us
Make Money with Us
Amazon Payment Products
Let Us Help You
EnglishChoose a language for shopping. United StatesChoose a country/region for shopping.
© 1996-2021, Amazon.com, Inc. or its affiliates