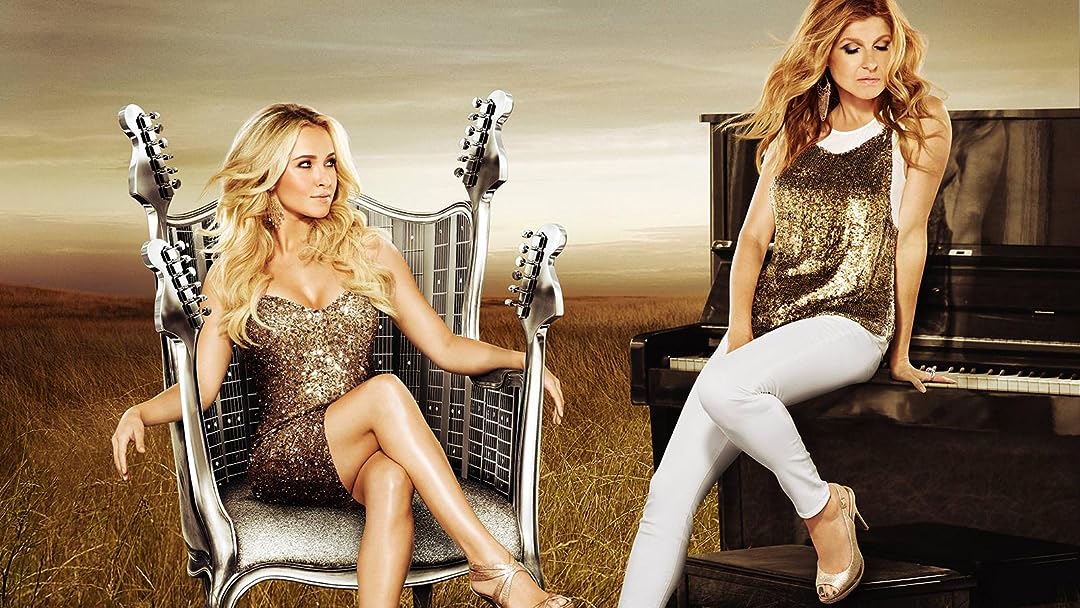 (786)
7.72014X-Ray7+
Returning for its second season, Nashville proves that some are fueled by their creativity and passion for fame, while others struggle to cope with the pressures of success.

Catra121Reviewed in the United States on April 27, 2016
4.0 out of 5 stars
Got hooked and can't stop watching...
Verified purchase
I recently got hooked on this show. I saw a random season 4 episode...then watched every episode available on demand that was available (only 3 other season 4 episodes) and I HAD to see the rest. I was hoping it would be available free on Amazon Prime...no such luck...but I HAD to see more of this show. So I paid for season 1, then 2, and finally 3...I couldn't get enough of this series.

Season 2 was very good in my opinion and the only reason I have it 4 stars instead of 5 is that I didn't like the music as much as I did in season 1. I can't believe these seasons are so LONG...I have gotten used to 10 episode seasons on Starz, HBO, and Showtime...so it was very refreshing to be back to a show with 20+ episodes in a season. They fit so much story and plot into each season that it feels like I have seen 6 seasons worth of show.

I'm very happy I stumbled on this show and highly recommend it.

Random ReviewsReviewed in the United States on March 5, 2014
4.0 out of 5 stars
Guilty Pleasure
Verified purchase
I don't watch much tv since I watch episodes only on Amazon, and only once or twice a week, but Nashville has become a guilty pleasure. Every time I watch an episode, I think "that's it." Then I watch the next, then the next, and it becomes a vicious cycle until I give in and enjoy every minute. I'd describe it as a soap-opera of sorts, though I haven't watched many so my comparison may be useless. I also don't care much for country music, but I've even enjoyed the singing (most of it). I do think that the songs and performances have gotten better as the shows goes on. Is it a top-notch show with A+ acting. Of course not. Is it entertaining in a "I hate her, I want him" kind of way? It's a fun show to watch, but don't expect anything amazing. Expect entertainment, some good music, and a lot of I-want-to-keep-watching drama.

DRobiVAReviewed in the United States on September 22, 2016
5.0 out of 5 stars
I love this show
Verified purchase
I love this show, I started watching this show during its 3rd season because one day, my regular shows were not on. When the first season promos aired, I recognized a star from General Hospital, and I wanted to watch the first season on tv, but Nashville's time conflicted with two shows that came on the same day. I was already dvring them due to my second job. When my shows returned, one of them was switched to a new day, well more Nashville for me. I was hooked, and wanted to know the beginning of the Avery and Juliette relationship. So I purchased season one and two, I am still watching season 2, and it is worth my money.
One person found this helpful

Nicholas J PaceReviewed in the United States on March 20, 2014
5.0 out of 5 stars
Great Show!
Verified purchase
It has captured the attention of my girlfriend and I since episode 1! We always are very looking forward to seeing the newest episode! I'm so glad this show made it to Season 2 and I hope it will make it to Season 3. If your a country fan, then, it's a MUST. It has a great cast, characters, and story line. The music is great. There is romance, comedy, drama; a realistic balance of all the sweet little things that make life wonderful! Last year my girlfriend and I were actually in Nashville (my birthday present) and we saw not once, not twice, but 3 TIMES Gunnar and Will Lexington (character names). Very, very cool people! Enjoy the show!
One person found this helpful

AllycatReviewed in the United States on April 20, 2014
5.0 out of 5 stars
Great story, even better music
Verified purchase
Nashville may be considered a night time soap opera because of the interaction of the 'players'. However, with the music and underlying stories it is much more than that. It is very interesting to see how the characters develop. For instance, one started as a spoiled brat and is growing into a caring adult, while another started as a very shy song writer and is becoming a force of her own. the only thing I can say I do not like much is the amount of sex showing on screen. We get enough of that with other programs and it really is not necessary to promote the story or the development of the characters.

sail galReviewed in the United States on January 31, 2014
5.0 out of 5 stars
Purchased because ABC wouldn't put in on their site in time to watch before next episode aired.
Verified purchase
The episode was clean and clear to watch.
The reason I bought it this time was because in order to watch an episode that has already been aired on ABC you have to wait 8 days (which is a day late to watch if you are trying to catch up on missed episode) to watch it. So unless you are a customer for 'certain' cable companies for TV, you have to pay to watch the programs you missed if you want to catch up before the next one aires. I have antennae TV so that doesn't count as being a cable customer regardless if you are paying for internet only. I am not that desperate to have to watch this series by paying for it if I miss an episode, so I will not be doing that again.

oliveReviewed in the United States on September 2, 2015
4.0 out of 5 stars
Great show
Verified purchase
Great show, not the best show I've ever seen, but I still can't stop watching! The main characters do a great job portraying what one would expect to be the lifestyle of the rich and famous. The music is fantastic, and they don't overplay them to the point that you're annoyed. Each episode leaves on a cliffhanger making you want more. The story line is fantastic and you're consistently looking for individuals to get together/break up/move on/ get a good gig, etc.

Betty CortyReviewed in the United States on April 14, 2014
4.0 out of 5 stars
I love the music
Verified purchase
I think season two had a soap opera quality to it. In that I mean this person sleeping with that person's love interest and everyone sulking away in saddness. Even the star, Connie Britton(?) has already slept with her husband, her ex love interest, her producer, and now this equally "famous" country singer. The equally famous country singer tells his driver to take him to the airport to get away from all the drama surrounding this family. But, I love Scarlett and her songs are out of this world, but she, too has had three love interests already now she needs to deal with her waco mom.
The music is excellent from each actor especially Scarlett as her first love interest produces her. Juliette is fun to watch because she's so crazy, but even her music is top notch, but she's quite the brat.
One person found this helpful
See all reviews
Back to top
Get to Know Us
Make Money with Us
Amazon Payment Products
Let Us Help You
EnglishChoose a language for shopping. United StatesChoose a country/region for shopping.
© 1996-2022, Amazon.com, Inc. or its affiliates