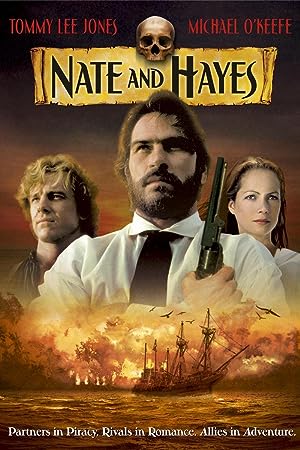 KaseReviewed in the United States on June 13, 2020
2.0 out of 5 stars
Not at all Historically accurate- Wheres the Blackbirding?
Verified purchase
There was no historical accuracy to the film. I was waiting for Hayes' swindling the islanders into giving him coconuts and a nine year old girl to sexually abuse. His foul treatment towards his black birding crew - a crew who captures humans and sells them into slavery- wasn't portrayed! And none of his sexual assault exploits - which he's more famous for than actual piracy - were never talked about in the movie! "SAVAGE ISLAND" portrays a terrible slave trader as a romantic hero leaving out historical facts and instead runs hero-pirate-romance-cliches with a southern accent from your second favorite man in black Tommy Lee Jones. Save the time, it was more fun FACT CHECKING this film than watching it.
11 people found this helpful

Leo HottReviewed in the United States on June 2, 2017
5.0 out of 5 stars
Stunning imagery!!!!
Verified purchase
Nate and Hayes is most definitely a " Pirate Movie" !!! I was in both the U.S. Army & the U.S. Navy & breaking any law on the sea, rivers or lakes can earn you the label of Pirate! This has happened to Rum Runners, Black Birders, Gun Runners ( as Captain " Bully" Hayes is labeled.) Theft of a ship or any sea going vessel & robbery as well as holding prisoners for ransom which we see still going on today!!! True... Pirates have replaced their cutlasses for Machine Guns but they are still called pirates!!! As far as action at sea " Nate & Hayes" clocks in as much time on the sea as " Captain Blood", " The Black Swan", " Sea Hawks" or any other Pirate movie you have seen!!! This is a outstanding Pirate film with exotic locations, Flora & Fauna as well as cannibals & your typical rival pirates. In fact Captain Bully Hayes's main adversary isn't the law but a rival! I don't want to go into to much detail & spoil the movie but as far as the 80's go there is not a lot of Pirate movies to choose from. I would say this is a must have for collector's of Pirate films & a fun filled adventure for movie viewers of all types.
15 people found this helpful

D.B.G.J.Reviewed in the United States on March 18, 2021
1.0 out of 5 stars
Always play a DVD the day it arrives
Verified purchase
I buy a lot of movies. Most are not from Amazon partially because of this disc. The movie is a classic and well worth watching. tommy Lee Jones is his typical self and in this role it is a good fit. A good story with twists and turns and an ending that leaves you cheering for the good guys.

Unfortunately, the DVD is a dud. It will not play in any player I have. This happens sometimes. It has only happened to me 3 times. Ironically all 3 came from Amazon. All were new and the first 2 went into me to watch pile and it was months before I got around to watching them only to be let down. Now I check them the day they arrive and if they are a dud, I can return them for a refund or replacement.

If you are looking for a good swashbuckling adventure this will not let you down and it has good replay value. The scenes are gorgeous and will make you want to head to the South Pacific. So do not hesitate to buy this, but if you get it here, play it as soon as it arrives.

Amazon CustomerReviewed in the United States on July 6, 2020
1.0 out of 5 stars
Time Waster
Verified purchase
This movie was so incoherent and factually fragmented that I almost don’t know where to begin. First, it is set in the Pacific where Pacific Islanders are being forced into slavery by “Blackbirders” (yes…that is the term they really use in the movie). The costuming of the Islanders looks like something out of Abbot and Costello’s movie “Pardon My Sarong”. Tommy Lee Jones is the captain of a ship doing trading in the South Pacific and his crew is so stereotyped that I almost expected Johnny Depp to show up any minute in his “Captain Jack Sparrow” personae. And the plot is so disjointed that I can almost hear the director, any time there is a lull in the action, yelling “Time for another battle scene!” The only bright spot in the movie was the love interest that Jones and O’Keefe are competing for (and trying to save from the “bad guy”) throughout the movie, Brit actress Jenny Seagrove. She manages to maintain her dignity (maybe it’s that British “stiff upper lip” thing) throughout the movie while the rest of the cast isn’t just losing theirs, but actively giving it away for free. I wasn’t familiar with Ms. Seagrove, so I looked her up. Apparently, she had performed on stage more than in movies…and that training and experience seemed to come through.
One person found this helpful

AugustineReviewed in the United States on June 29, 2020
2.0 out of 5 stars
Pretty bad.
Verified purchase
Jones must have needed some cash to do this stinker. Visually, the movie manages to entertain, but the story is thin and the acting thinner. Maybe the director didn't know if he wanted to make a comedy, an adventure yarn, or a drama, but this fails on all accounts. You can actually see Jenny Seagrove smiling and giggling as she is running away from people trying to kill her. If she couldn't take this movie seriously, I sure couldn't.
3 people found this helpful

A.D.RackleyReviewed in the United States on July 11, 2020
5.0 out of 5 stars
One of the first movies I ever bought on Amazon.
Verified purchase
This early Tommy Lee Jones movies is among his best ever. It's Indiana Jones and Pirates of the Caribbean all rolled into one with a dash of all the old swashbuckler films added in for spice. It's among my top 20 movies of all time. If you haven't seen it, watch it now. You'll thank me.
5 people found this helpful

C. SzolcReviewed in the United States on June 29, 2020
2.0 out of 5 stars
A poor movie that hasn't aged well.
Verified purchase
The plot was stupid, the characters idiotic, the dialogue moronic, and the pace unbelievably stultifying. There was some nice scenery. I suspect Tommy Lee Jones is a bit embarrassed he ever made this movie.
6 people found this helpful

ACReviewed in the United States on July 12, 2020
1.0 out of 5 stars
Poorly done — a mediocre attempt at being a swashbuckling adventure film
Verified purchase
A rather flat, one-dimensional, and cartoonish attempt at an adventure film, "Nate and Hayes" is a disappointment. Tommy Lee Jones plays... Tommy Lee Jones — the same character he plays in so many of his films. The only difference here is he sports a beard. The script is a string of predictable clichés and the music is corny: very much like the over-dramatic and heavy-handed score of a poor western. This motion picture stands in stark contrast to adventure films like the Indiana Jones series. The settings are quite nice but are not enough to save this pathetic picture.
One person found this helpful
See all reviews
Back to top
Get to Know Us
Make Money with Us
Amazon Payment Products
Let Us Help You
EnglishChoose a language for shopping. United StatesChoose a country/region for shopping.
© 1996-2022, Amazon.com, Inc. or its affiliates