Skip to main content
Navy SEAL Dogs: My Tale of Training Canines for Combat and millions of other books are available for Amazon Kindle. Learn more 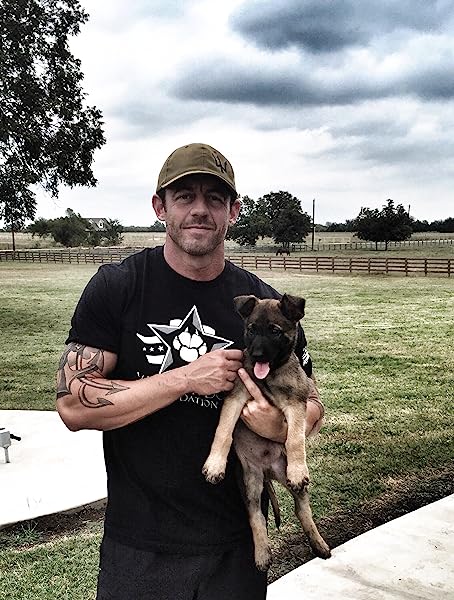 by Mike Ritland (Author), Michael Kramer (Narrator)
4.7 out of 5 stars 585 ratings
See all formats and editions
Sorry, there was a problem loading this page. Try again.

The Navy SEAL teams' elite K9 warriors do it all-from detecting explosives to eliminating the bad guys. These powerful dogs are also some of the smartest and most highly skilled working animals on the planet. Mike Ritland's job is to train them. This is the tale of how Ritland discovered his passion and grew up to train these elite dogs. After becoming a SEAL, he was on combat deployment in Iraq when he saw a military working dog in action, and he instantly knew he'd found his true calling. Ritland eventually started his own company to train and supply working and protection dogs for the U.S. government, the Department of Defense, and other clients. He also started the Warrior Dog Foundation to help retired Special Operations dogs live long and happy lives after their service.
Read more
Previous page
Next page

"Fascinating. . . . About time these heroes got the attention they deserved for a young audience." ---Kirkus

Mike Ritland is the New York Times bestselling author of Trident K9 Warriors. A former Navy SEAL, he started his own company to train dogs for the SEAL teams, as well as for the U.S. government and many other clients. He also founded the Warrior Dog Foundation to help retired Special Operations dogs live long and happy lives after their service.

Audiobook veteran Michael Kramer has recorded more than two hundred audiobooks for trade publishers and many more for the Library of Congress Talking Books program. An AudioFile Earphones Award winner and an Audie Award nominee, he earned a Publishers Weekly Listen-Up Award for his reading of Savages by Don Winslow.

Start reading Navy SEAL Dogs: My Tale of Training Canines for Combat on your Kindle in under a minute.

J. Morren
3.0 out of 5 stars Not enough meat with the potatoes
Reviewed in the United States on April 9, 2020
Verified Purchase
Good book about a Navy seal, and how he got into training dogs. Then the back half are stories of other dog handlers and their experiences.
But it's only ok. Doesn't really get into the "meat" of the dinner. I was expecting more details on how he trains, and what these dogs go through in training and 100 pages of that. Or, with the stories of other handlers, was expecting more than a chapter.
3 stars due to book just being too short and not delving into the training deep enough.
Read more
6 people found this helpful
Helpful
Report abuse

John McKeon
5.0 out of 5 stars The ties that Bond
Reviewed in the United States on November 15, 2018
Verified Purchase
This is an excellent book on the selection, training and operations of Navy Seal Dogs. The author describes his love of dogs, his entry into the Navy and his eventual ascension to the SEALS. He found his calling training SEAL Dogs and their handlers for combat. The author describes the training in detection, tracking and apprehension and how soldiers lives have been saved by the actions of these highly trained dogs. There are numerous stories of canines and their handlers in combat and throughout the emphasis is on the bond that develops between the handler and his/her dog. There is an appendix at the end of the book on the use of dogs in the military from WW1 to present times, this section was eye opening and informative. The author is now involved with Military Working Dogs that are retired from active combat and helping them adjust to this stage of their life. If you are a Dog lover and a NAVY SEAL admirer you are in for an informative, action filled read about mans best friend and their importance in todays world involving dangerous operations. Recommended.
Read more
3 people found this helpful
Helpful
Report abuse

Eric W Townsend
5.0 out of 5 stars Mindset Revealed
Reviewed in the United States on April 23, 2017
Verified Purchase
This book was an excellent read. 1st off: Thanks to Mr. Ritland and all the SEALS, all military personnel, handlers, trainers, 1st responders, and to all the Warrior Dogs out there for your service!!

I just obtained my 1st Belgian Malinois "Axe" (named in honor of Matthew Axelson- SEAL in Operation Red Wings). I am seeking the mindset and knowledge needed to properly train him for Search and Rescue for Campbellsville, KY Fire Dept Special Operations Division. Axe will be with me on high angle rappelling/rescue, swift water rescue, River Boats, SCUBA, land search, etc...

Without access to this elite training, I am seeking out information to train myself and Axe in the SEAL mentality and as close to the physical training as possible so no victim suffers due to a lack of training. This book has started me off on the right foot that we needed as we build our team with his brother "Murph" (named in honor of Mike Murphy SEAL-Operation Red Wings).

Thanks again for this book and for your service! "1st in.. Last out"- Campbellsville Fire Dept Special Operations Division and US Civil Corps, LLC.
Eric Townsend
Read more
12 people found this helpful
Helpful
Report abuse

E. Sander
4.0 out of 5 stars Very interesting, had no idea how much Navy SEAL Dogs did
Reviewed in the United States on June 20, 2019
Verified Purchase
Not my normal type of book to read. But learned a lot about the selection, training and different missions these dogs are involved in- and how many tasks dogs are better suited for than humans. I thought it was funny when a dog is trained in French, they'd only respond to commands in French.
Read more
3 people found this helpful
Helpful
Report abuse

BGZap
5.0 out of 5 stars DOGS THAT GIVE
Reviewed in the United States on January 3, 2014
Verified Purchase
All dogs give, but these dogs give everything. If you like K-9 dogs this is a great book. It isn't the idea of war that is attractive but the willingness and eagerness with which these dogs are willing to give us everything they have without question. I was also pleased with the author's consistent warning throughout the book that this breed is NOT for everyone, not for the first-time owner or someone who just wants to sit around with a pet. These are dogs that need a job and will ruin your life without one. And very few are suitable for k-9 work.
These are exceptional dogs trained by exceptional people to do exceptional things. The stories are great but what I liked better were reading about training methods used and how intensely bonded the dogs and handlers become.
If you love dogs and are interested in K-9 type work, this is a great book.
Read more
4 people found this helpful
Helpful
Report abuse

Annie's Reviews
5.0 out of 5 stars Great book about the unsung heroes of the SOF world!
Reviewed in the United States on October 24, 2021
Verified Purchase
Warrior dogs have been part of the lexicon of the armed forces since time immemorial. It is great to hear that they are finally getting their training with the kindness & integrity that they deserve! Thank you Mr Ritland for recognizing them & treating these hero dogs in the manner they deserve! Keep up the good work.
Read more
Helpful
Report abuse

John T. Turner
4.0 out of 5 stars Good Book
Reviewed in the United States on January 7, 2014
Verified Purchase
Started a little slow and it seemed the author was searching for material to fill out the book. However about 1/3rd of the way through it got very interesting especially with the stories of actual dogs in real-life situations. Needless to say, I was impressed with how well the dogs were trained and how useful they proved themselves.

I'd recommend the book to anyone who is a dog lover or who enjoys reading about the exploits of Navy SEALs. I'd especially recommend the book to anyone who owns a guard-type or protection dog. But these dogs are in a totally different category than your run of the mill family pet who happens to be a certain breed. These pups are something else!
Read more
3 people found this helpful
Helpful
Report abuse

Andrew
5.0 out of 5 stars Amazing book by an amazing man! Great podcast and great work with dogs!
Reviewed in the United States on November 8, 2020
Verified Purchase
Amazing book written by an amazing team guy who has made a huge impact in the military world and civilian especially with his work with the dogs and his awesome podcasts with some of the most amazing warfighters and people from around the world! Must have book!
Read more
Helpful
Report abuse
See all reviews

BigAl
4.0 out of 5 stars Cracking read
Reviewed in the United Kingdom on June 1, 2020
Verified Purchase
I first heard of Mike Ritland when head a guest on Jocko’s podcast. He came across really well and the book was recommended. I was peripherally aware of the work MWD’s do in the U.K. and US mukhtar you but this has given a fantastic overview. Well worth the read.
Read more
Report abuse

christopher jones
4.0 out of 5 stars an OK book
Reviewed in the United Kingdom on April 6, 2014
Verified Purchase
this was a decent book, for anyone interested in working dogs, and why we have these animals by our side.
Read more
Report abuse

Amazon Customer
5.0 out of 5 stars Definitely worth a read
Reviewed in the United Kingdom on August 25, 2017
Verified Purchase
Wonderful book great read from start to finish.
Read more
Report abuse
See all reviews