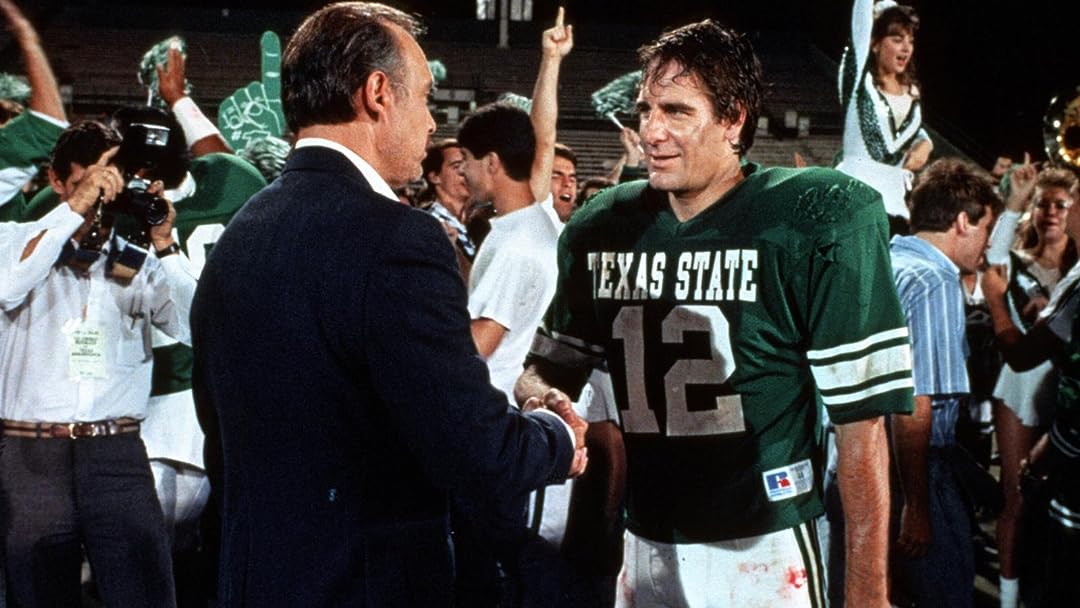 (816)
6.11 h 48 min1991X-RayPG-13
Penalized by the NCAA, the Texas State Fightin' Armadillos must recruit their football team from the actual student body - can these ragged gridiron misfits possibly compete?

Keon Shere' McIntoshReviewed in the United States on October 23, 2018
4.0 out of 5 stars
One of my favorite Football films
Verified purchase
One of the all-time greatest football films and best films ever with an all-star cast that lives up to the hype. Scott Bakula, Sinbad, Jason Bateman, Kathy Ireland and the list goes on. Way too many to name. Scott Bakula stars as: Paul Blake- a former high school quarterback superstar who had a chance to go to college and go on to become one of the all-time greats. But after the passing of his father, he gave it all up to run the family business working on his dad's farm. However, the game never really left his heart. Every morning as he gets up getting ready to work on the farm, he heads out to an open field in the back where he works on his throwing game still getting the rush he had years ago in high school playing the big game.......& he's still got it! Well, those skills are about to comeback at a well needed time. Robert Loggia (who plays Walter- the defensive coordinator) recruits him to comeback for a run before it's too late for old times sake to help out his ailing football program that's been dealt a big blow for: Breaking NCAA rules paying their players, academic cheating and all kinds of football scandals making the Texas State Armadillios the laughing stock of college football and the talk of the town. Now at age 34, Blake tries to return to the game he stills loves and provide a little magic. Even though he agrees to return for one last run, he constantly bumps head with head coach: Ed Gennero (played by: Hector Elizondo). As head coach and offensive coordinator, he wants Blake to lead the team and lead by example. Blake's having a hard time figuring out exactly how to lead the team the way Ed wants him to. Eventually, he figures it out and their team pulls it together before it's all too late. Forced to play Iron man football (playing both offensive & defense), the Armadillios learn about sticking together as a team and having each others back no matter what. It's a great film about never giving up and giving it all your best regardless of the outcome.
4 people found this helpful

Kevin CarhillReviewed in the United States on September 29, 2019
1.0 out of 5 stars
1 1/2 Stars: Cliche Trash
Verified purchase
The movie looks goods, it's shot well, the actors are solid... but man is this script garbage... I didn't care about anything that happened in the third act because none of it was built up... they're a number of 'payoffs' with characters that rely on tropes and cliches as a opposed to actually building them up through the story.... it's so generic and lazy... for as long as the movie is, they desperately needed to set up more of this story instead of cutting from one cliche scene to the next... better to watch the Replacements or Little Giants.
3 people found this helpful

PinkittyReviewed in the United States on May 1, 2021
5.0 out of 5 stars
Great Fun!
Verified purchase
I'm as far as one can get from a football fan, but I am a Scott Bakula fan, and this movie is hilarious and very entertaining. Robert Loggia, Hector Elizondo, Jason Bateman, et al. are all fun to watch and the story is full of heart as well as laughs. So glad to add this to my video collection. Plus it arrived practically overnight!
2 people found this helpful

Bryan S. SampselReviewed in the United States on July 27, 2015
5.0 out of 5 stars
Classic!
Verified purchase
I loved this movie when it came out back in '93 or so...saw it on one of the movie channels. I had recorded it onto VHS back then and watched it to death.

This movie may have been lower budget and never saw a theater, but you can see its direct inspiration for "The Replacements" that came out a few years later.

Bakula, as always, turned out an excellent performance. Sinbad was...Sinbad. Funny as ever. Kathy Ireland was still quite young and attractive and hungry to launch a movie career. The football scenes were well done, the characters were well written, and Rob Schneider did some of the best sports announcer lines I've ever heard in a movie.

FuzzyTiggerReviewed in the United States on August 2, 2018
5.0 out of 5 stars
Well worth watching
Verified purchase
This is one of the typical sports movies about a loser team making good. You know what is going to happen but along the way you have to at least smile or burst out laughing. Well worth watching and much more enjoyable than half the trash that they call movies or TV shows now. If you know football you half to laugh and if you don't this will give you an insight into what goes through players minds that makes them play. It also shows how some boosters just don't understand that the rules also apply to them.
5 people found this helpful

Grey BuyerReviewed in the United States on February 25, 2011
5.0 out of 5 stars
Another forgotten football favorite
Verified purchase
I'd completely forgotten about Necessary Roughness until taking a day off and finding it on cable in the middle of the morning. I had one of those "oh yeah" moments as I remembered how much my wife and I enjoyed the movie when it first hit the big screen. When the cable movie was over I immediately purchased Necessary Roughness to add to my home library.

If you enjoyed the 2000 pro-football comedy "The Replacements" (another of my favorites) you'll enjoy the 1991 university football comedy "Necessary Roughness." Basically the stories are the same; well known coach seeks out has-been quarterback with issues who falls for an unavailable female and together they all face their challenges so it all works out in the end. Necessary Roughness is just enjoyable entertainment that will deliver the laughs from a variety of characters. Even though it is a 20 year old movie it really has nicely withstood the passage of time.

David A. JohnsonReviewed in the United States on January 21, 2008
5.0 out of 5 stars
Just a fun film!
Verified purchase
Just a warning up front....if you are looking for a serious/real life football movie then move on.

However, if you are intrested in a lighthearted tongue-in-cheek comedy about college football underdogs then this is your movie. This cast may not be considered A-list but they come together as a whole to make a very funny movie. Robert Loggia's half time pep talk during the final game is hilarious! And how much more tongue-in-cheek can you get than a 30 something year old freshman quarterback (Scott Bakula), a female field goal kicker (Kathy Ireland), and a college professor with one year of player eligibility left (Sinbad).

Yes, it is full of cliche's, predictable plot twist, and a cheesy sceen or two. But remember, I warned you if you want a serious football movie to look elsewhere. But, if you want a fun to watch/feel good comedy about an underdog earning respect then this is your movie.
6 people found this helpful

Chris JessonReviewed in the United States on July 2, 2021
5.0 out of 5 stars
Sports classic from the early 90s!
Verified purchase
Great early 90s sports comedy classic that falls into the same genre as Major League and Slapshot. Wildcats was a good predecessor, but this has a great cast and a solid story to back up the laughs.
See all reviews
Back to top
Get to Know Us
Make Money with Us
Amazon Payment Products
Let Us Help You
EnglishChoose a language for shopping. United StatesChoose a country/region for shopping.
© 1996-2022, Amazon.com, Inc. or its affiliates