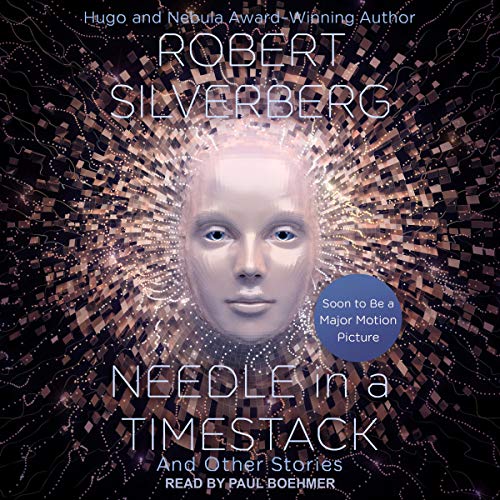 Needle in a Timestack: And Other Stories

Needle in a Timestack is Robert Silverberg at his very best - intelligent, inventive, and visionary. This collection showcases his talent for thought-provoking science fiction, ranging in themes from time travel to space travel, the media to mortality.

In the titular story - under development as a feature film by Oscar-winning screenwriter John Ridley - a jealous ex-husband warps time in a vindictive attempt to destroy his former wife's new marriage. Thirty-one identical sons have a shocking surprise for their mother in "There Was an Old Woman". The prophetic "The Pain Peddlers" depicts reality TV in a way that allows viewers to revel in a voyeuristic, adrenaline-fueled rush. Also included are Silverberg's Hugo Award-winning "Enter a Soldier. Later: Enter Another", and the Locus Award winner "The Secret Sharer", a Joseph Conrad-inspired tale of a ship captain drawn into a strange alliance with a stowaway.

Special invitation from Audible!
Learn more about Membership
List Price: $24.49
You Save: $3.06 (12%)
By completing your purchase, you agree to Audible’s Conditions Of Use
Sold and delivered by Audible, an Amazon company
Share

4.5 out of 5 stars
4.5 out of 5
12 global ratings
How are ratings calculated?
To calculate the overall star rating and percentage breakdown by star, we don’t use a simple average. Instead, our system considers things like how recent a review is and if the reviewer bought the item on Amazon. It also analyzes reviews to verify trustworthiness.
Top reviews

BigOrangeDaveTop Contributor: Fantasy Books
5.0 out of 5 stars Exceptional Stuff
Reviewed in the United States on December 12, 2021
Verified Purchase
Reality TV did not exist in 1962; except in a Robert Silverberg story included in this collection. From chimps finding religion to starship captains finding their unique place in the universe to soldiers serving on a lonely frontier. It’s hard to believe this is just a small piece of all of the short stories of the author.

There is not a bad story in the entire bunch. Enjoy! I certainly did!
Read more
2 people found this helpful
Helpful
Report abuse

Shirley M.
5.0 out of 5 stars Excellent Collection
Reviewed in the United States on January 25, 2020
Verified Purchase
Excellent collection of stories of time travel and other science fiction themes, with introductions that are almost as entertaining as the fiction. Bravo!
Read more
3 people found this helpful
Helpful
Report abuse
See all reviews
Back to top
Get to Know Us
Make Money with Us
Amazon Payment Products
Let Us Help You
EnglishChoose a language for shopping. United StatesChoose a country/region for shopping.
© 1996-2022, Amazon.com, Inc. or its affiliates