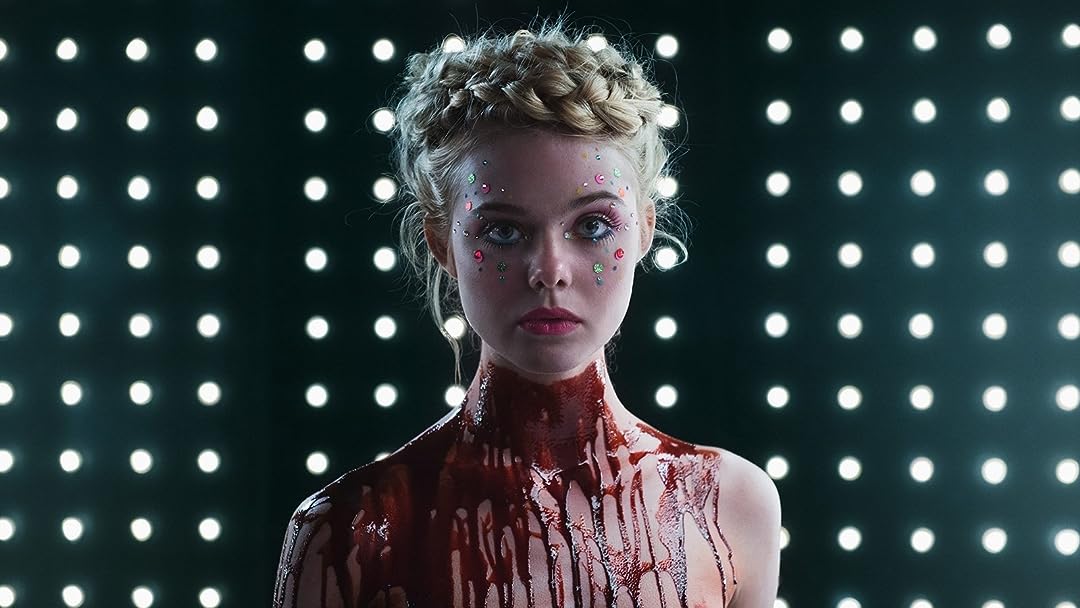 (2,933)
6.21 h 57 min2016X-RayUHDR
When aspiring model Jesse moves to Los Angeles, her youth and vitality are devoured by a group of a beauty-obsessed women who will use any means necessary to get what she has.

Movie freakReviewed in the United States on September 9, 2018
5.0 out of 5 stars
SPOILER ALERT!!! Weird & Erotic. Only watch with someone as weird as you!
Verified purchase
This is a weird film about the life and plasticity of hot models in L.A.
This film is not for everyone. Only the weird will like it.
We got nudity, virgins, lesbians, lesbian necrophilia, cannabalism, a shit load of blood, and some violence.
This is not a film you want to watch with your parents or anyone else that doesn't know how to enjoy weird stuff like you do. If you don't get weird and allow your darkest thoughts out for a walk once in a while, then this film isn't for you.
But if do entertain watching weird off the wall erotic art films with taboo subjects, then this film is for you and only you.
I don't think you can watch it with someone unless they are someone you can be weird with and them expose their weirdness to you.
I gave it 5 stars because it had the courage to film some stuff I haven't seen in other films and to balance out all the people who will not like anything about this film. Bon Appetit.

G. FazioReviewed in the United States on August 27, 2017
4.0 out of 5 stars
Culty
Verified purchase
With "The Neon Demon", director Nicolas Winding-Refn seems to have come to the end of a trilogy which began with "Drive" (2011) and continued through "Only God Forgives" (2013). The idea seems to be to take genre flick styles -- car action, revenge, and horror -- and to unravel them to the point where they become pure sensation, almost abstractions.

"Drive" was more of a "normal" film, but even so, it was less about its Hollywood stuntman-by-day, getaway-car driver-by-night story than it was the reverie of motoring through L.A. at night in a blur of shimmering neon and chrome to the sound of super-cool synthwave. The Bangkok-set "Only God Forgives" looked like a dive into that city's fight-club & go-go bar underground, but played out like a trippy internal exploration of the Oedipal urge, with star Ryan Gosling lost in its womb-like maze of red corridors.

And now we come to "The Neon Demon", which is superficially about the fashion industry, its dog-eat-dog Darwinism, and the idea that beauty is in the eye of the beholder -- something which Refn makes nauseatingly literal by the last reel. While more coherent than "Only God Forgives" -- and mercifully absent that film's sleepwalking performance style -- "The Neon Demon" is soaked in surrealism, more nightmare than narrative, some sort of bastard witch-house hybrid of '80s French "cinema de look" and Italian horror.

Elle Fanning plays Jesse, a wide-eyed, underage naif with the looks of a porcelain doll who's come to L.A. with big dreams of being a model. She stays in a seedy motel with an even seedier owner (Keanu Reeves) and befriends Ruby (Jenna Malone), a make-up artist she meets at a test shoot with photographer Dean (Karl Glusman), who wants to hook up with her. Out clubbing with Ruby, she meets professional models Sarah and Gigi (Abbey Lee Kershaw, Bella Heathcote), who instantly catch the scent of new competition and turn up the bitch-face.

Jesse's agent (Christina Hendricks) lands her a photo shoot with a top photographer, which takes on an ominous ritual quality. Later, in an absolutely phenomenal piece of pure cinema , Jesse has her triumphant glitter moment on the catwalk, before falling into some sort of tranced-out communion with a strobing neon triangle. It's the runway walk as 21st century voodoo ceremony, as composer Cliff Martinez' synth-driven score moves from glistening bliss to churning, queasy bass.

This is pretty "out there" cinema, and if the "blue box" scene in "Mulholland Drive"was too much for you, don't even think about going there. Fans of the occult will have a field day; look for that thaumaturgic triangle to reappear subliminally throughout the film, even in the way the actors are positioned in a fateful scene at an empty swimming pool.

It feels like Winding-Refn was born in the wrong era, because he would've been a great midnight movie maker back in the day. In the 70s or 80s, "Neon Demon" would have played well alongside cult films like "Eraserhead" or "Liquid Sky". As a fringe movie, seemingly best enjoyed under the influence, it would have found its niche of freaks.

But with great stars come expectations: Fans of Fanning from "Maleficent" or Kershaw from her work as a Chanel model are in for a nasty surprise. The lack of exposition and bizarre plot twists will drive some people crazy, but Winding-Refn is simply imagining the vampiric nature of the fashion world as a literal coven of ghouls.

This is far from a perfect film: Refn remains an imaginative filmmaker with the ability to create powerful fusions of sound and image, but, like his pal Gaspar Noe, he can't seem to put it to the service of anything more than soulless violence and shock. It's no coincidence that of the three films in this "trilogy ", the strongest was "Drive", and it was the only of the three that wasn't written by Winding-Refn. He's teetering on the brink of greatness; here's hoping he gets there.
134 people found this helpful

Amazon CustomerReviewed in the United States on July 12, 2019
1.0 out of 5 stars
Worst movie I've ever seen.
Verified purchase
We live in a country where people are free to express themselves however they like but to peddle this garbage as art or entertainment is just wrong. I'm pretty liberal but is it seriously necessary to show pedophilia, necrophilia, and human cannibalism just to make the point that models are very competitive and petty? In a world where we seem to pride ourselves on standing up and telling society we won't accept there's anything we can't do, we seem to have lost sight of the fact that there are simply some things we shouldn't do, even if we can get away with it. This movie was a Prime example of that. Amazon should stick to destroying small business and stay out of the movies. This film makes me think that somewhere, there is some serious blackmail material on Keanu Reeves. Honestly, the absolute worst movie I have ever seen.
40 people found this helpful

ladyluck666Reviewed in the United States on April 11, 2018
3.0 out of 5 stars
Jena Malone was the best part of this film.
Verified purchase
Somewhat interesting and artsy. Very shallow and vapid, but it is about the modeling industry, jealousy, and the LA scene. It might have helped to show a bit more character development. Even though I didn't like any of the characters, I found Ruby (Jena Malone) the most interesting out of the whole movie. I agree with many others about the cinematography and visual elements as the highest points of the film. I think they could have cut some of the scenes, or shortened them, or just explained a little more about the culty connection with Ruby and the two other models, or even expounded on more of the cultish events that might help explain their behavior, especially the final scene. I think it could have been better if a few things were clarified.
25 people found this helpful

dustedvinylReviewed in the United States on November 17, 2017
3.0 out of 5 stars
Fairly empty -- but has moments of cinematic freshness, plus a stunning soundtrack
Verified purchase
Didn't love it -- didn't really *like* it even. However, there are moments in it that are cinematically stunning and even "new" feeling. (In particular, almost every fashion scene or photo shoot, which dissolves into complete abstraction). There are also a couple great surrealistic images and touches.

Unfortunately, both the story and the "message" of the story are thin and overly simple/amateur feeling, which makes this movie paradoxically boring. If there isn't anything to chew on -- then the style and pacing has little to support it.

As an L.A. movie, it presents great atmospheres of the city, but suffers in comparison to the dreamscapes of Mullholland Drive or its opposite La La Land.

Three stars instead of one or two, because of the scenes that do make it worth it, the technical craft, and especially the score, which might be one of Cliff Martinez's best. The film is technically well made -- set design, lighting, cinematography, and acting. Each performer did a great job, especially considering some of the dialogue. All this said, I still look forward to what NWR does, even when they are misses rather than hits ("Drive" for example, is one of my favorite contemporary movies). And I have to say, if you're a fan of his, or of the genres he works in, its still worth the watch -- though it isn't essential. If you do watch it, wear good headphones -- the soundtrack is insanely good.
25 people found this helpful

Smith FamilyReviewed in the United States on April 24, 2021
5.0 out of 5 stars
The Horror of Los Angeles
Verified purchase
Much like David Cronenberg’s "Maps to the Stars," The Neon Demon is a caustic deep dive into the shallow surfaces of L.A.’s vampiric culture. It's a bit of satire, with the laughs replaced by huge quantities of blood.

There is a ghastly, icy perfection to the cinematography that makes the Grand Guignol scenes all the more terrifying. Many of the visions push the outer limits, much in the way the the aspiring denizens of L.A.'s "beauty above all else" class push the limits of human morality in their pursuit of bodily perfection.

As others have noted, Jena Malone gives an amazing performance. The one miss I felt was not having her character, Ruby, close the film by greeting the "new girl in town" the way she greeted Jesse, thus implying that Ruby's Countess Bathory routine was part of a larger, ongoing pattern of L.A. vampirism.

If you are a fan of Suspiria (both the original and the remake), Cronenberg, and Kubrick, you will probably love this film. I am very glad I ignored the one star "hated it" reviews. But it is definitely not for the faint of heart.
6 people found this helpful

Elle M. TeeReviewed in the United States on November 29, 2019
1.0 out of 5 stars
What a waste of time. Insultingly bad.
Verified purchase
Empty, boring, and awful. I have patience for nearly any movie, especially those that bring something new to the table. I love weird. I don't mind gore. This was hideous with zero redeeming qualities and chatacters that were not only unlikable, but completely undeveloped, boring, and useless. The dialogue was ridiculous and sounded as if it had been written by an angry and pretentious 13 year old boy. For a brief moment towards the end I thought it was finally getting good....then just more droning music and long empty stares. I can't believe I sat through the whole thing.
13 people found this helpful
See all reviews
Back to top
Get to Know Us
Make Money with Us
Amazon Payment Products
Let Us Help You
EnglishChoose a language for shopping. United StatesChoose a country/region for shopping.
© 1996-2021, Amazon.com, Inc. or its affiliates