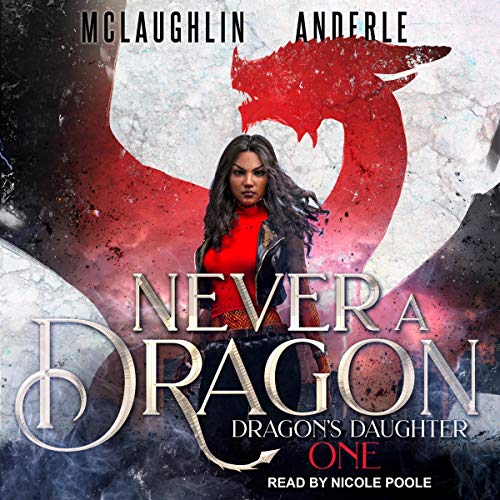 Dragons used to rule the world; those days are over. But humans, mages, and dragons have just begun learning to co-exist without conflict.

Be careful what you wish for, they say. They're right.

After a devastating magical attack on their home leaves Ky's mother missing, she's placed at a special school for her protection. A school for dragons - but this year, for the first time, mages will be attending alongside their scale-y fellow students to learn more about magic and draconic powers.

The attacker who stole away Kylara's mother isn't finished yet and turns up the heat on the school. Ky's dragon powers keep growing in mysterious ways, but will even that be enough to save her?

Ky is a stranger in a place she doesn't know, under attack and desperate to find her missing mother. She'll need all her courage and strength to survive the tests ahead of her.

Tom Intiso
5.0 out of 5 stars Unflipping believable, incredible and all-around AWESOME
Reviewed in the United States 🇺🇸 on December 16, 2022
Verified Purchase
This series has been on my Kindle for quite some time, and I’m only now getting around reading it. To be honest, I’m a fan of almost everything that Michael Anderle has written or cowritten, but this one caught me entirely by surprise.

The concept, as much as I could grasp it just from looking at the covers and titles, didn’t really do much for me, but it was from one of my favorite authors, so I bought it anyway, and tucked it away for a day when I was bored. Now I wish I hadn’t waited so long.

Apparently this is actually a sequel series to another series that I also own, but by which I was even far less enchanted than this one. Having read either works by Kevin McLaughlin, I should’ve known better. Sadly, I didn’t.

Let me tell you now… This is an incredible read, and incredible premise, and really, you can’t go wrong in any size shape or form by picking it up, so do that now and ENJOY!

I’m now left with one major quandary… Do I keep reading this series, or do I go back and read the first one? I’ll have to let you know later.
Read more
Helpful
Report abuse

Leslie Hysom
4.0 out of 5 stars Dragon’s Daughter Book 1, Never A Dragon
Reviewed in the United States 🇺🇸 on September 23, 2022
Verified Purchase
This was an entertaining book and is well written and is great for teens. I really enjoyed it and plan on starting the 2nd in the series immediately.
Read more
One person found this helpful
Helpful
Report abuse

G. Walden
4.0 out of 5 stars Secrets, so many secrets!
Reviewed in the United States 🇺🇸 on November 17, 2021
Verified Purchase
A new age! Mages are no longer slaves to the dragons. Yet there is still mistrust and bigotry... This is the times Kylara is raised in. Kylara Diamantine is raised in complete seclusion by her mother, away from other dragons. At 17 she dreams of getting away to explore but life has a different plan for her. She ends up in a special school where dragons and mages train together. As a dragon she must learn her power and magic and how to use it. But evidently Ky is not what she appears to be either, as she gains new powers. It turns out the school is not the safe haven everyone thought because something is relentlessly hunting her. ... I enjoyed this book and love the twists the authors have woven into the story. The book is well written with engaging characters. This book ended satisfactory even though there will be another book! ( Note: there is a scattering of language here and there, but not enough to bother me).
Read more
Helpful
Report abuse

Maine Ah
4.0 out of 5 stars Young Adult Dragons & Mages Find their Magic
Reviewed in the United States 🇺🇸 on October 15, 2021
Verified Purchase
Entertaining young adult series that can be enjoyed by readers of all ages. It’s an interesting and different concept of dragon to human shifters who discover their special abilities in a new school designed for young mages as well as the young dragon shifters. A young woman dragon named Kylara escapes from a fire monster that burns her home and steals her mother who has directed her to keep running until she reaches the dragon detective who directs her to the school. Once there, the bereft Kylara makes new friends and a few enemies as the fire elemental seeks her out causing puzzling new life saving skills to emerge. As an older reader it held my attention reminding me a bit of Harry Potter with a girl as the main character. Targeted for a young audience but written well enough with solid plot twists so I enjoyed it.
Read more
Helpful
Report abuse

Shelpooh65
5.0 out of 5 stars Enjoyable read.
Reviewed in the United States 🇺🇸 on May 10, 2022
Verified Purchase
Yet another teen/paranormal school type of series. I like the spin on dragons and magic and that characters are spilling over from the prior series. I like the snark and the pace is decent, though I often feel this author could get the journey done with a lot fewer words and lose nothing quality-wise. All these books are riddled with grammatical errors.
Read more
Helpful
Report abuse

Kindle Customer
4.0 out of 5 stars Not Bad
Reviewed in the United States 🇺🇸 on October 22, 2021
Verified Purchase
Ok so I didn't realize that this was the same author who wrote the "Steel Dragon" series. I guess I need to go back and re-read that series. Having said that, I really enjoyed reading this book. And am looking forward to reading this series as well.

Take a chance, I think you will enjoy it as well !!!
Read more
Helpful
Report abuse

KC
5.0 out of 5 stars Excellent read!
Reviewed in the United States 🇺🇸 on September 21, 2021
Verified Purchase
I remember reading the first chapter thinking " what the heck is this book about" and actually, I considered returning it. I put it down for a few days and picked it up again yesterday and haven't been able to put it down until now. What a story! I'm not a fan of books that take the first 4 or 5 chapters to get into the meat of the story. Never a dragon took off from the second chapter and sucked me in. Great characters, great story and I'm very much looking forward to reading the rest of this series. Well done Mr. McLaughlin, well done indeed!
Read more
Helpful
Report abuse

Carv Wilson
5.0 out of 5 stars A whopping good time
Reviewed in the United States 🇺🇸 on October 19, 2021
Verified Purchase
Misunderstandings and confusion about who and what you could be is the thought of nearly every teenager! Dragons and mages are no different. A unique world with humans, mages, and dragons with centuries old bigotry on both mages and dragons sides. Great coming of age story for one young goal raised by a dragon. Fun from beginning to the end.
Read more
Helpful
Report abuse
See all reviews

P. Bassett
5.0 out of 5 stars another cannot put down series
Reviewed in the United Kingdom 🇬🇧 on July 6, 2021
Verified Purchase
I have read the Steel Dragon what can I say? great story line fast action lots of 'hold' your breath moments , which now brings me to this book when purchased did not know it was a 'carry ' on, but like Steel Dragon fast moving, action, emotion, and do far the 'hold your breath' moments are coming early on,
cannot wait to read the rest of the book, and yes (sigh) I will be buying all the rest of the books as well, lol,
seriously read the Steele Dragon first, and then come on to this series neither series will disappoint you but be aware you will want to read on, and on, and on, well done to the Authors for making yet another series that is unforgettable
Read more
Report abuse

S. Reid
5.0 out of 5 stars Enjoyable start
Reviewed in the United Kingdom 🇬🇧 on September 9, 2021
Verified Purchase
A few familiar faces and a lot of new ones help keeo this story going well with a great new story arc and another dragon with very interesting powers and backstory.
A little too familiar but it does work well and keep my interest.
Read more
Report abuse

Kindle Customer
5.0 out of 5 stars lovely new book
Reviewed in the United Kingdom 🇬🇧 on August 2, 2022
Verified Purchase
Loved reading this book and also that the steel dragon and Cassandra are still involved in the story That love it cannot wait to read more
Read more
Report abuse

Rosemary Ellis
5.0 out of 5 stars An interesting start .
Reviewed in the United Kingdom 🇬🇧 on June 8, 2022
Verified Purchase
Kylara now knows her mother is not in fact her mother . But she is half Dragon when she started as a mage.
Read more
Report abuse

Jo douglas
5.0 out of 5 stars Great read
Reviewed in the United Kingdom 🇬🇧 on January 6, 2021
Verified Purchase
Going straight for the next in series. Also steel dragon series before this is amazing! Will thoroughly recommend to anyone that enjoys fantasy reading
Read more
Report abuse
See all reviews