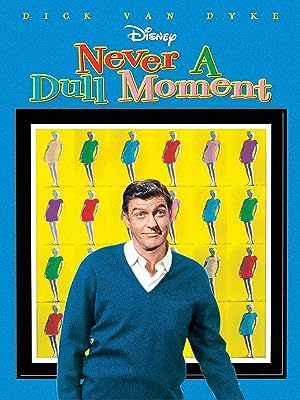 (214)
6.21 h 40 min1968G
When a struggling actor is mistaken for a gangster, his earnest attempts to set the record straight only escalate his involvement in a daring museum robbery.

Phyllis Ann KarrReviewed in the United States on January 2, 2021
5.0 out of 5 stars
Ah, nostalgia!
Verified purchase
In the 1970s, I had a rather disastrous courtship experience during which I at least saw several movies I remembered quite favorably. This was one: all I really remembered after so many years was that when it was over, it seemed as if it had lasted no more than twenty minutes -- that's how well it fit this title (which turns out to be rather a generic one). Watching it again in 2020, I found it hadn't really suffered in entertainment value. There is one problematic and inadequately explained coincidence in the plot structure, near the end; but since the whole thing is a light romp, that doesn't hurt the total effect too much. I give it five stars for doing well what it sets out to do -- which is not to provide fine, important, or solid fare, but to entertain with unpretentious fluff; it is enjoyable, and sometimes that's what you want and need.
3 people found this helpful

Karalee J.Reviewed in the United States on December 29, 2018
3.0 out of 5 stars
Fun movie, poor packaging
Verified purchase
My husband and son really enjoyed this movie. Nothing overly complicated, just silly and good, clean fun. The only reason for taking away stars is that when it arrived the disc was rattling around in the case. I realize that there isn't much that anyone can do about it, but I'm hoping that it happened in transit, not as they were packaging it for shipment and then they just shipped it anyways. We haven't noticed any issues with the disc just yet, but there are a few small scratches from all the movement inside the case.
One person found this helpful

Joseph ParraReviewed in the United States on January 12, 2021
5.0 out of 5 stars
Nostalgic gangster comedy :)
Verified purchase
This spoof of gangster movies was a lot of fun that at first, I thought was a tad slow. On a second viewing, I realised it was specifically paced differently for folks who were not used to the machine-gun patter of most gangster comedies. Lovely work by Edward G. Robinson (one of the 4 Kings of Organised Crime of the '30's and Henry Silva with fun stuff by Dick Van Dyke. Yeah, it's fun, see??? ;) <3

ArtistReviewed in the United States on February 26, 2019
1.0 out of 5 stars
Not for children
Verified purchase
This movie has some funny moments from Dick Van Dyke. It is, however, very disturbing overall; definately NOT for children. It's "G" rating is deceptive (being put out by Disney with no nudity or swearing) because it is full of references to murder and violent acts in general.
3 people found this helpful

microjoeReviewed in the United States on September 7, 2005
4.0 out of 5 stars
mistaken identity comedy farce...
Verified purchase
Dick Van Dyke stars as struggling TV actor Jack, playing gangsters in hokey weekly series. In a case of mistake identity, a gang member picks up Jack on a street corner thinking he is the out of town hitman he is supposed to pick up for a big job. Taking him to the home of the mob boss, Jack tries to escape. When he realizes that discovery of his true identity means his death, Jack dives into the role of his life, literally. His mistaken identity cover-up is hilarious as he really seems to relish his role as a tough guy, even scaring the other real gangsters. Edward G. Robinson does a marvelous job playing a mob boss that would secretly prefer to be a painter and steals famous art for his own enjoyment instead of to sell. When the real hitman shows up, Jack has to convince the gang that HE is the phony, and stop the robbery. His love interest in the movie is well played by Dorothy Provine.

Disney Studios had high hopes for this film, starring one of their big name actors, and the film has its moments but was not a box office success. The scenes in the Art museum get a little tedious at the end but over all it is enjoyable, and there is some nice art as well. A.J. Carothers wrote the screenplay, after working on several other Disney projects such as "Miracle of the White stallions". The story is based on the book by John Godey. The Disney movie posters promoting the film had a tagline that said, "we're having such a wonderful crime...". Released theatrically on June 26, 1968. It appeared on "The Wonderful World of Disney" in 1979. It was released on video for the first time in 1985, and DVD for the first time in 2005.

Bruce B.Reviewed in the United States on April 4, 2019
5.0 out of 5 stars
Disney Movie that is for the entire family
Verified purchase
Disney made a lot of these live action comedies back in the day. You can't go wrong with Dick Van Dyke as the lead. Never a Dull Moment makes for a great night of viewing for the entire family, from the kids to grandma and grandpa. Extremely happy to add this one to my Disney movie collection.
See all reviews
Back to top
Get to Know Us
Make Money with Us
Amazon Payment Products
Let Us Help You
EnglishChoose a language for shopping. United StatesChoose a country/region for shopping.
© 1996-2021, Amazon.com, Inc. or its affiliates