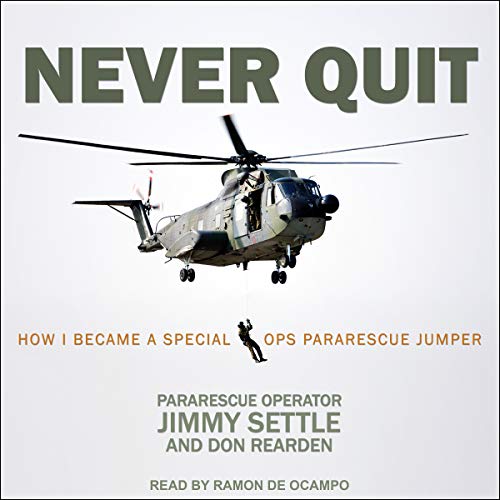 Never Quit: How I Became a Special Ops Pararescue Jumper

“That Others May Live” is a mantra that defines the fearless men of Alaska's 212th Pararescue Unit, the PJs, one of the most elite military forces on the planet. Whether they are rescuing citizens injured and freezing in the Alaskan wilderness or saving wounded Rangers and SEALS in blazing firefights at war, the PJs are some of the least known and most highly trained of America's warriors.

Never Quit is the true story of how Jimmy Settle, an Alaskan shoe store clerk, became a Special Forces Operator and war hero. After being shot in the head during a dangerous high mountain operation in Afghanistan, Jimmy returns to battle with his teammates for a heroic rescue, the bullet fragments stitched over and still in his skull.

In a cross between a suicide rescue mission and an against-all-odds mountain battle, his team of PJs risk their lives again in an epic firefight. When his helicopter is hit and begins leaking fuel, Jimmy finds himself in the worst possible position as a rescue specialist - forced to leave members from his own team behind. Jimmy will have to risk everything to get back into the battle and save his brothers.

From death-defying Alaskan wilderness training, wild rescues, and battles against the Taliban and Al Qaeda, this is the true story of how a boy from humble beginnings became an American hero.

Your audiobook is waiting!
Learn more about membership
List Price: $17.49
You Save: $2.50 (14%)
By completing your purchase, you agree to Audible’s Conditions Of Use
Sold and delivered by Audible, an Amazon company

Amazon Customer
3.0 out of 5 stars A little too much background
Reviewed in the United States on January 30, 2019
Verified Purchase
The personal background and PJ training used up nearly 80% of the book. I would have preferred to have read more about his PJ experiences after completing training.
Read more
7 people found this helpful
Helpful
Report abuse

Amazon Customer
4.0 out of 5 stars Alaksa PJs
Reviewed in the United States on July 13, 2020
Verified Purchase
only negative is did not get enough stories about his rescues or talk about when he got married and had his son.
Read more
Helpful
Report abuse

Lindsey McKee
5.0 out of 5 stars Gift
Reviewed in the United States on December 28, 2018
Verified Purchase
Great as a gift
Read more
One person found this helpful
Helpful
Report abuse

JOHN GRIFFITH
4.0 out of 5 stars good career book
Reviewed in the United States on December 10, 2018
Verified Purchase
I like the book very much and its a very good read.
Read more
Helpful
Report abuse

angela
5.0 out of 5 stars Great book
Reviewed in the United States on January 30, 2020
Verified Purchase
my 15 year old loves it.
Read more
One person found this helpful
Helpful
Report abuse

Fi
4.0 out of 5 stars Great book
Reviewed in the United States on January 27, 2019
Verified Purchase
Pj’ are some of the most underrated sf’s in all the armed forces.While I respect all of them, saving lives would be more gratifying as opposed to taking lives.
Read more
Helpful
Report abuse

ArmyWife101st
2.0 out of 5 stars I got bored and didn't finish it
Reviewed in the United States on March 13, 2019
I didn't finish this because I got bored with all the background stuff. I understand he went through a crap ton to become a pj, but I wanted to know more about his career and life as an actual pj. We're a military family so I get opsec and what comes with "I can't share that part". If you can't share things, don't write a book. Thanks for your service. You are always appreciated.
Read more
3 people found this helpful
Helpful
Report abuse
See all reviews