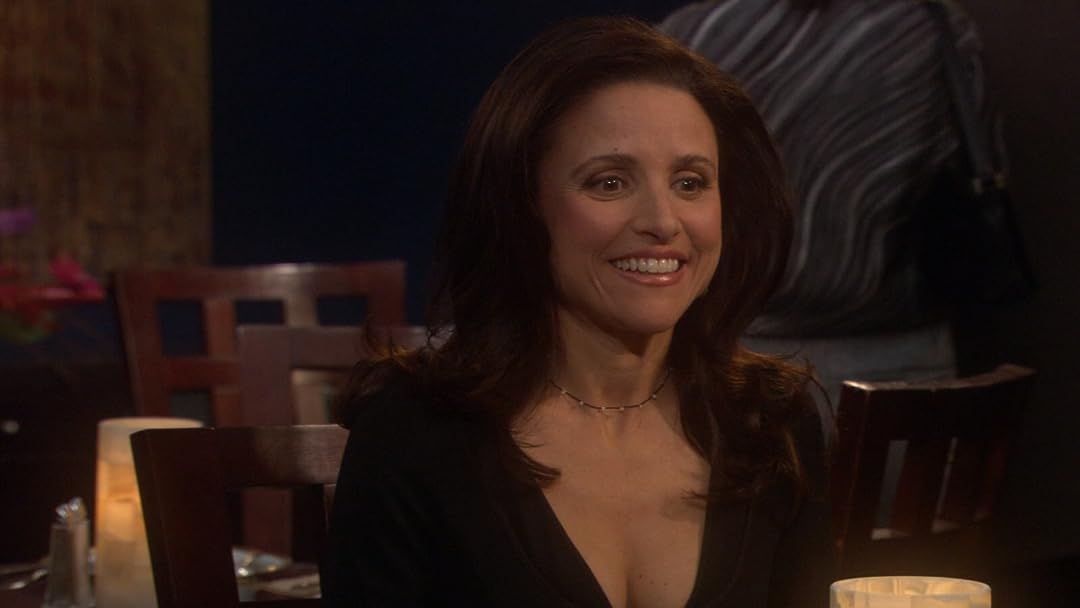 The New Adventures of Old Christine

(846)
7.12006ALL
This hilarious comedy from Kari Lizer (Will & Grace) stars Emmy® Award winner Julia Louis-Dreyfus as Christine Campbell, a divorced working mom who successfully juggles the daily stresses of motherhood and owning a women's 30-minute gym.

Little Miss CuteyReviewed in the United States on January 23, 2008
5.0 out of 5 stars
One of my favourite comedies ;->
Verified purchase
I really love this show. It's so good and I can see why Julia won a Golden Globe for this. She's such a talented and funny actress and makes this show truly enjoyable. I also really love Wanda Sykes and she brings even more humour to the show and rounds out a great cast.
While everyone probably already knows the plot of the series, here are the episodes within this DVD set.
1 PILOT - She's sweet, she's adorable, she's young, I hate her. Christine meets new Christine.
2 SUPERTRAMP - Christine looks for a fling ... and lands the man mocked as the Sad Dad at Ritchie's school.
3 OPEN WATER - Is love blind? The unexpected occurs when Barb and Pete set Christine up on a blind date.
4 ONE TOE OVER THE LINE, SWEET JESUS - Richard has no problem with Christine and Burton's romance. Nope, no problem at all.
5 I'LL SHOW YOU MINE - The men in her life. After two months of dating, Burton still hasn't met Ritchie.
6 THE OTHER F WORD - Christine takes it upon herself to diversify Ritchie's white white school.
7 LONG DAY'S JOURNEY INTO STAN - Solo and so low. After she breaks up with Burton, Christine discovers dining out alone is no treat.
8 TEACH YOUR CHILDREN WELL - Four hundred dollas a guest!? Christine rebels against extravagant children's birthday parties.
9 RITCHIE HAS TWO MOMMIES - ...But only one of them is nuts! Christine freaks when New Christine shows up at Parents' Night.
10 NO FAULT DIVORCE - Why did Christine and Richard get divorced? Maybe for a reason Christine never knew about.
11 EXILE ON LAME STREET - Afraid of what Ritchie will be exposed to at a Rolling Stones concert, Christine tries to crash the event.
12 SOME OF MY BEST FRIENDS ARE PORTUGUESE - Working women of the world, unite. Christine is thrilled to meet another working mom at Ritchie's school.
13 A FAIR TO REMEMBER - Christine's hopes of rekindling her romance with Burton are dashed when she learns he has a new girlfriend ... named Christine.

You really have to check out this show. You'll really love it. And fans who already love it will love the special features here like Unaired scenes and gag reels to name a few.
I highly recommend this dvd to all fans of the show and to people who haven't already seen this, because you'll watch it and fall in love with it too.

dokReviewed in the United States on July 10, 2020
5.0 out of 5 stars
out of sync
Verified purchase
this first season is very economical compared to the rest but the video doesn't sync with the audio. i changed my rating from 3 stars to 5 stars when i was able to drop the playback speed on my laptop enabling my slower roku stick on the tv to sync up.
One person found this helpful

Jonathan HinsonReviewed in the United States on December 28, 2021
5.0 out of 5 stars
Master of comedy scores again!
Verified purchase
Julia Louis-Dreyfus is one of the funniest people I know. She is backed up by a great supporting cast, including Wanda Sykes.

KaylaReviewed in the United States on April 10, 2018
5.0 out of 5 stars
Hilarious show, great acting!
Verified purchase
Great quality packaging and DVD, brand new. This show is absolute comic gold. Julia Louis-Dreyfus is a seriously underrated actress. She is a genius and portrays an awkward, lovable, beautifully hilarious flawed divorced mother. The supporting cast is also amazing.
2 people found this helpful

Hannah HarnissReviewed in the United States on April 17, 2021
4.0 out of 5 stars
Nostalgic Sit Com
Verified purchase
This is a show I grew up watching in high school and I just love the humor in it. This show is amazing and I have always wanted to rewatch it as an adult. I am thrilled it's on amazon.

DarkBlueEyesReviewed in the United States on April 16, 2018
5.0 out of 5 stars
A smart comedy, for today, w/ a great comedy cast!!👣
Verified purchase
This was a great cast assembly, of comedians, who just seemed to hit on a vibe. This is not a redo, Seinfeld show, but something fresh & different in tone, that was not on the TV, when this ran for 5 yrs. I really enjoyed, being able to purchase, a smart comedy & to watch when I want!!
One person found this helpful

samuraiReviewed in the United States on February 24, 2022
5.0 out of 5 stars
Good show
Verified purchase
Good show
See all reviews
Back to top
Get to Know Us
Make Money with Us
Amazon Payment Products
Let Us Help You
EnglishChoose a language for shopping. United StatesChoose a country/region for shopping.
© 1996-2022, Amazon.com, Inc. or its affiliates