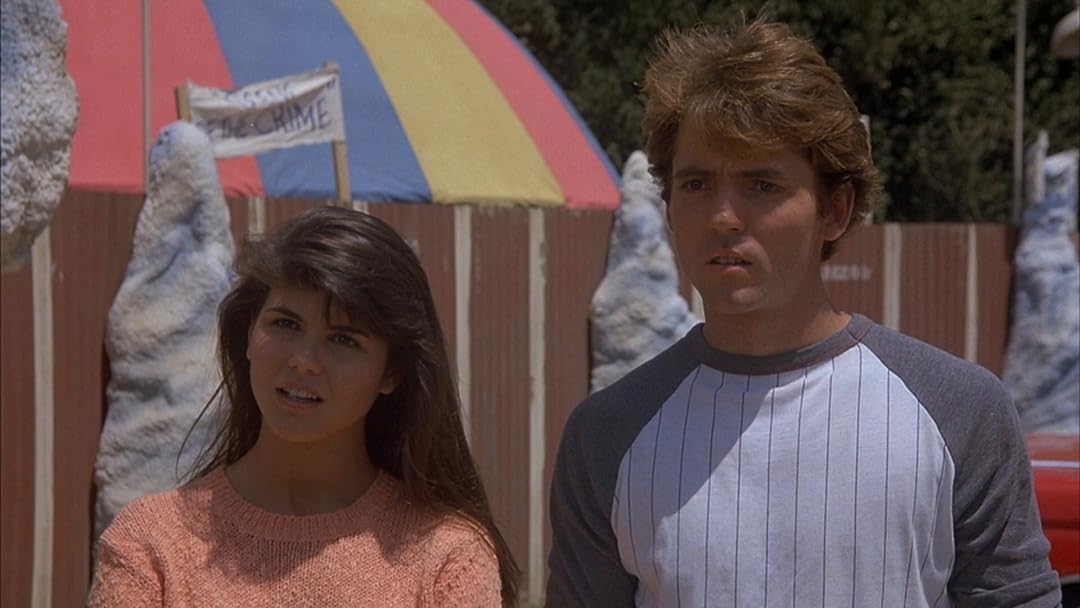 (687)
6.11 h 29 min1985R
A brother and sister are the new kids in school, and prime targets of Dutra (James Spader) and his band of bullies. Tension mounts as the bullies' harassment reaches unbelievable heights of menace inthis thriller by Director Sean Cunningham. Stars George C. Scott as Sgt. Kilvinski and Stacy Keach as Roy Fehler.

Kevin DudleyReviewed in the United States on August 14, 2019
4.0 out of 5 stars
Sean S. Cunningham's "The New Kids" comes to blu-ray courtesy of Mill Creek Entertainment
Verified purchase
The 1985 horror/thriller "The New Kids" came and went out of theaters only grossing $199,108 against a production budget of 6 million. It received mixed reviews at the time and was directed by Sean S. Cunningham ("Friday the 13th", "Deep Star Six"). It is also notable for featuring a young James Spader as the antagonist. It is entertaining if uneven at various points but is saved by a very inspired and crazy third act. It reminded me at times like a bigger budgeted "Last House on the Left". As a time capsule from the mid 80's though, this often forgotten film hits the mark. Mill Creek Entertainment brings "The New Kids" to blu-ray as part of their retro VHS slipcover releases.

The film is presented on a dual layer disc in its original 1.85:1 aspect ratio utilizing the AVC codec at a rock solid bit rate staying in the upper 20's and low 30's throughout. Overall the film looks great on this disc. Detail is very nice along with accurate flesh tones and contrast & black levels. I noticed no compression artifacts at all. I do not have any prior DVD release on hand to compare but the transfer on this blu-ray should be big step up overall.

Audio is presented in 2 channel master audio. Everything sounded clear and well defined. English subtitles are included for the hearing impaired.

No extras are included, not even a trailer.

"The New Kids" while not a great film does definitely have its moments. It mixes up thriller elements with horror violence into a nice cinematic stew that while not original, is entertaining enough to watch. James Spader is particularly good in what was one of his very early film roles. This blu-ray is a great way to check out this film and the price being less than 9 dollars currently makes it a no brainer for fans of the glorious 80's.

Allen Garfield's #1 fan.Reviewed in the United States on August 14, 2019
5.0 out of 5 stars
Classic 80s Teensploitation. Mill Creek retro bluray.
Verified purchase
Looks and sounds better than the DVD - not a 4k scan or anything, but a great value. Cool slip case and has optional English subtitles. (Unusual for Mill Creek.)

Horror/thriller/home invasion flick with a young James Spader (this was filmed in 1984). A Teen-o Straw Dogs, so to speak - it takes place in Hicksville, USA.

Directed by exploitation pioneer Sean S. Cunningham (Friday the 13th) who, with Wes Craven, made history with Last House on the Left. New Kids isn't quite as sadistic. (Now there's an understatement, few movies are!)

The screenplay is by Stephen Gyllenhall (Maggie and Jake's father!) who also directed the sleaze classic Certain Fury(1985, with Tatum O'Neal and Irene Cara). Then again, Jason and Justine Bateman's father had a good run in 70s grindhouse fare...

Rounding out the cast is Lori Loughlin (Amityville Horror 3D, Secret Admirer, and The Night Before - her teen-in-bondage classic), Eddie Jones (C.H.U.D., Invasion USA) and the late, great Tom Atkins (Halloween 3, Night of the Creeps, Maniac Cop, Lethal Weapon) and the aforementioned James Spader, who's pretty effective as a psychotic teen who takes sadistic delight in terrorizing... well, everyone, lackeys included (one lackey is Tim Van Patten's lackey in The Class of 1984).

Glad to have on bluray. Mill Creek products have vastly improved over the last year - subtitles, some extras(not on this, however) and great improvement in the picture and sound dept. The 80s retro series is truly inspired. And of course, the price is right!
8 people found this helpful

Kyle HachReviewed in the United States on August 24, 2019
4.0 out of 5 stars
Sean S. Cunningham shows it doesn't have to be Friday the 13 for a killing spree....
Verified purchase
This cult classic finally gets the blu-ray release that I honestly never thought it would get.
It was restored and released by Mill Creek Entertainment and I was a little nervous about this because I have been severely let down by one of their previous releases.
But I was pleasantly surprised, this new transfer for The New Kids looks incredible.
It was so nice to see it in HD since I have only seen it on VHS.
It's fitting that the slipcover is meant to look like a VHS rental, as this is where the movie was known from- the glorious days of video stores.
Also features alternate poster artwork on the inner blu-ray sleeve.
Absolutely nothing in the way of special features.
Not even a trailer.
Just a menu screen that gives the Play Movie option and subtitles.
I can forgive this, as I am just totally happy the movie is finally available in HD.

Movie includes some fun performances from classic actors, most notably James Spader showing off his psychotic side, like he does so well.
Tom Atkins also makes a brief appearance and he's always fun to see.
The movie is an under-seen gem but does juggle severe tonal shifts.
It gets incredibly violent as the film progresses but it is a blast all the way through.
If you're a fan of 80s cult cinema and/or James Spader, you will get a kick out of this.
I would highly recommend this new blu-ray, Mill Creek has done an incredible job with this one.
It has me excited to see a few other titles they recently put out.
I now have some faith in the company.
Great price too!
5 people found this helpful

gdavisloopReviewed in the United States on November 10, 2019
2.0 out of 5 stars
Why?
Verified purchase
Why was this movie even made?

I purchased and watched "The New Kids" last night to check out the young stars and on the strength of the director, but the plot of this movie simply wasn't very interesting,, and there wasn't enough nudity or sex (none really) for prurient interest. If not for some language, I would suspect this was a low-grade TV movie made just to fill time in a 24-hour schedule. (And with pay-cable expanding around the time it was made, it probably was - not good enough for HBO but maybe Showtime).

James Spader is completely uninteresting as the "bad guy" - there's not a single twist to his personality beyond his platinum blonde hair. Lori Loughlin isn't that pretty and is interesting only for her current legal problems. Eric Stoltz is the stand-out, both for his looks and his acting (dig those sympathetic facial expressions), but he somehow disappears before the climax of the movie - COMPLETELY WASTED.

The plot was just suspenseful enough for me to watch the whole (short) movie in one sitting, but I wish I hadn't bothered. The Blu Ray (good picture quality and useful English subtitles, but no extras) immediately went into my "never to be watched again" pile.

Just because some 80s high-school movies are really interesting today doesn't mean they all are - and in retrospect, this director did "Friday the 13th" - not the far more interesting "Nightmare on Elm Street" - oops, my mistake!
2 people found this helpful

rhodymikeReviewed in the United States on December 29, 2018
3.0 out of 5 stars
probably 2.5 stars, almost a flop but the last 20 minutes saved it
Verified purchase
I always liked Spader so I gave it a shot. Really corny and slow for almost the whole movie. Spader was still pretty green too, so he was just OK. The last 20 minutes got better with a surprise twist too. Not sure I would recommend it (unless you like spader and even then, you have to really like him)
3 people found this helpful

Adam HershbergerReviewed in the United States on January 28, 2020
5.0 out of 5 stars
Hidden Gem of the 80’s
Verified purchase
Got it as a gift for my brother & he loved it. We grew up watching this hidden little gem of a movie. I know this’ll be hard to believe, but James Spader has never been creepier. Great villainous role for him. The VHS style packaging of the movie is pretty cool too.
2 people found this helpful

Overall this is a great value.
One person found this helpful

Nerdy GuyReviewed in the United States on October 28, 2020
1.0 out of 5 stars
Defective disc
Verified purchase
This is the 3rd time I've bought this bluray and these are defective. I don't see how any of you are able to watch this. It absolutely will not play in my player. There's nothing wrong with my other bluray discs either. It says region A meaning it should play in American bluray players. I'll never waste my time on this again.
See all reviews
Back to top
Get to Know Us
Make Money with Us
Amazon Payment Products
Let Us Help You
EnglishChoose a language for shopping. United StatesChoose a country/region for shopping.
© 1996-2021, Amazon.com, Inc. or its affiliates