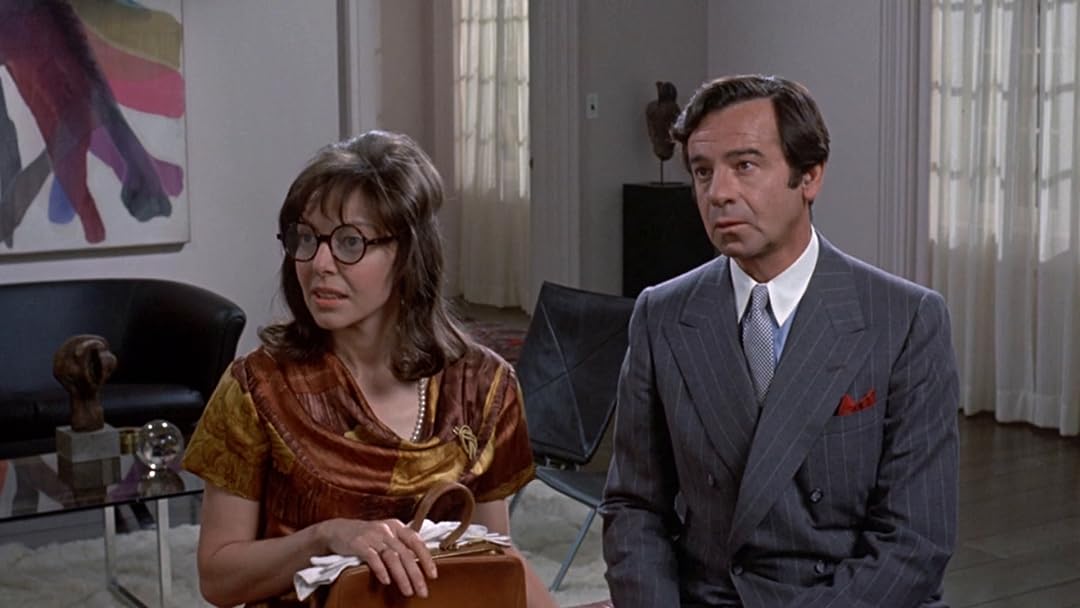 (1,576)
7.31 h 42 min1971X-RayG
Henry Graham, a confirmed bachelor with a zest for luxuries, receives the shocking news that he is now broke. Henry’s spirits are low as he returns to his town-house to discuss the situation with his butler, Harold who suggests marriage as a way out.

Sisyphus JonesReviewed in the United States on June 20, 2019
5.0 out of 5 stars
Butchered by the studio but still great
Verified purchase
I love this movie but I hate myself for loving it because it brought great heartache to director/writer/star Elaine May when the studio whittled down her lengthy cut into a more palatable 90-minute version.

Apparently, May was rough to work with...from a studio perspective. Her background in improv probably explains why she liked to shoot a lot of takes and coverage...I imagine she was trying to create and capture tiny moments brimming with life.

On the other hand, when years later Warren Beatty tried to create an opportunity for Elaine May to work without studio interference, we end up with Ishtar. So maybe Elaine May needs some checks and balances to tease out her best work. (I think it’s great that she won the Tony at 87 for The Waverly Gallery. So glad I got to see this comedy legend live on stage. She was great!)

But I love “A New Leaf” even if it doesn’t represent May’s full intentions and vision. In some ways, it’s of its time. It favors long meandering scenes that may test the patience of modern viewers but in taking its time, these scenes achieve many beautiful comedic moments. In other ways it still feels bold, sophisticated, and timeless.

It’s also occasionally messy with a few brief fantasy sequences that come from nowhere (but are actually flashes of the subplot the studio removed), and a rushed ending. It’s all forgivable.

This is really the story of Henry (Matthau), a rich but helpless scoundrel who tries to woo and marry a wealthy heiress when his trust fund runs out. Henry is so helpless, his butler dresses him. And he doesn’t understand a thing about money which is why he finds himself broke.

In the process of scheming his way back into the lifestyle to which he is accustomed, Henry changes — largely because his meal ticket, Henrietta (May), is even more helpless than he is and because he defends her from an even bigger scoundrel played to perfection by Jack Weston. By becoming Henrietta’s caretaker for all the wrong reasons, Henry inadvertently becomes a better version of himself. He transforms.

While that underlying story is rather sweet, there’s nothing sentimental about May’s execution as director or her portrayal of the clumsy and absent-minded Henrietta. Meanwhile, there’s nothing outwardly likable about Henry and his singleminded plot and yet Matthau makes us root for him anyway because...well, who can resist that craggy, sad, droopy hound dog cartoon face?

The print is pristine. There’s a version with bonus features I didn’t know about until after buying this one. If you like extras, check out that one.

J. P.Reviewed in the United States on July 21, 2019
5.0 out of 5 stars
Clever, well-performed humor -- one of my favorites!
Verified purchase
This film never has seemed to garner the praise that I believe it deserves. The over-the-top performance by comedic genius Walter Matthau is, for me, his best performance. Elaine May is delicately and adorably clumsy and bumbling. Together, the characters unwittingly bring out the best in each other, and surprisingly make the perfect pair – thus, a humorous and touching love story.

This isn't a roll-on-the-ground-with-laughter comedy. But, there are definitely some hilarious moments. This comedy is what I'd call an intelligent comedy. The weaving of the story is funny, compelling and touching at times.

Besides Matthau and May delivering perfect performances, the supporting actors deliver superb portraits that add to the fun. Also, the title of the film is perfect.

I love this film. It's one of my favorite screwball comedy love stories. It is different, off-beat and seemed to be ahead of its time when first released in 1971. In my books, "A New Leaf" is in the best-of-the-best category for comedy and romance, and it's anything but typical.
20 people found this helpful

JR-55Reviewed in the United States on November 8, 2017
3.0 out of 5 stars
Disappointed because of 3 technical issues
Verified purchase
3 things keep me from giving this 5 stars.
(1) No Sub-Titles. I have profound hearing loss and the lack of Sub-Titles (which is a standard feature on nearly all movies and TV show DVDs) makes it difficult for me to understand the dialog.
(2) Not the original sound track, different music is used for some reason
(3) Not the original theatrical Aspect Ratio, it is in 16 X 9 instead
All that said it is a Very good movie, decent quality scan
20 people found this helpful

Courtland J. CarpenterReviewed in the United States on August 1, 2016
5.0 out of 5 stars
Pleasant little off beat movie with dark humor and a lot of heart especially from the actors who made this work for me.
Verified purchase
Not a five star blockbuster mind you, but an offbeat film about a lone rich guy who has lost most of his inherited fortune due to his own excess, and must marry into more money to maintain his style of living. He initially comes off as a worthless leech without any redeeming quality or skills. His goal to become rich again has a complication, his fiance, he must find one before it's known he's poor. He must woo her and win her and get her to marry him in a limited time window. He then must find a way to kill her, inherit her wealth, all without getting caught and going to jail.

Walter Matthau is great as the snooty rich guy whose dispassionate enough to want to kill for money. Elaine May who wrote the story did not like how it was corrupted for the film. Since she's a satirical writer, I can understand what she probably had intended, but I liked the film and think it's one of those hard to find quite gems that exist out there. That it's given a Blu-ray treatment is a blessing as well. My guess if you may either love or hate this movie, but you'll have to agree you don't see many like it.
16 people found this helpful

GregoryReviewed in the United States on May 18, 2021
5.0 out of 5 stars
To me this is just a great movie. It has a made for TV feel but it's still great
Verified purchase
I really like the theme and character and writing of this movie. It's very funny of course in it's own classical way. I remember watching this at some time and enjoying it. It's of course dated back to that time, and feels a little like a made for TV movie, but it's excellent acting pulls it above that level. However it's rare enough that some might not watch it over and over again. So to some it might be a better prime rental just to see it. It's likeable enough that we can probably watch it enough times and I'm a big enough fan of this movie to buy it, so I bought the Prime streaming version of this rather than buying. As it's rare enough that some may have never seen it and good enough although somewhat like a made for TV movie I'd say it's worth the buy for some at least for our household it is. I have to give it five stars and Walter Matthau gives it that rating as well as the main "love interest" who plays her part very well. A fun watch the older folks will like. Modern compared to the old classics for the really old seniors who never saw this on TV. And I think this was on TV as a movie on TV at one time or another as I can recall seeing it on TV a long time ago. Print quality on the online prime version is excellent as well.
One person found this helpful

walkerReviewed in the United States on November 28, 2015
5.0 out of 5 stars
A Gem from the 70s
Verified purchase
"Gracious.... Heavens", if only I could solve my problems as Henry Graham solved his, though (happily) not quite as he had planned. I loved the deadpan Matthau in nearly everything he did. The supporting cast here, perhaps chosen by director May, are all fine, with several standouts, including the late George Rose. BIG thumbs up to Olive Films for restoring key parts of the original music that Paramount swapped out with some kind of junk for the VHS release (e.g. When it dawns on Henry that he's practically penniless), as per my timely pleas for them to do so. Still, I was hoping that for the BD version director May's alternate version would have been included, which ran an additional 78 minutes-with subplots and an ending quite unlike that which producers Evans and Koch forced May to go with. So we'll probably never get to see what May really had in mind and why, even if Matthau himself was happy with the issued release.
20 people found this helpful

A. Film LoverReviewed in the United States on May 14, 2020
4.0 out of 5 stars
A New Leaf gets a New Life
Verified purchase
Okay, no, it's not a masterpiece. Elaine May delivered a three-hour cut, refused to let the studio see it while she was cutting, and was impossible, so yes, it was taken from her and re-cut into a releasable film. But I can tell you with some certainty that three hours of this film would not have produced a masterpiece. But what's left has such great moments of laugh out loud hilarity. Elaine May was and is a wonderful actor and she shines here. And Matthau is great. I've never been on the James Coco bandwagon - for me, he's simply not funny or appealing at all. Jack Weston, on the other hand, is. It's disjointed and rambling and frustrating at times and she'd do much better with her next film, the truly great The Heartbreak Kid. The transfer is fine.
2 people found this helpful

TechnicalFriendReviewed in the United States on February 21, 2022
1.0 out of 5 stars
G-rated?? Beware! - NOT "family friendly!"
Verified purchase
With this film starring Walter Mattau and with it "Rated G" from many years ago it sounded interesting to us for a possible "family" movie night that did not trample our values. OOPS!! Forget it. By the time the star heads to see a relative to borrow money from the language used in the film goes right down into the sewer. There is so much irreverence and then outright profanity used we had to cut it off early. We wonder how in the day this movie netted a G rating. "PG" then at least would be more appropriate, but still not a film we want to listen to knowing what trash talk it is loaded with. To us that ruins the experience and the delivery of the story.
See all reviews
Back to top
Get to Know Us
Make Money with Us
Amazon Payment Products
Let Us Help You
EnglishChoose a language for shopping. United StatesChoose a country/region for shopping.
© 1996-2022, Amazon.com, Inc. or its affiliates