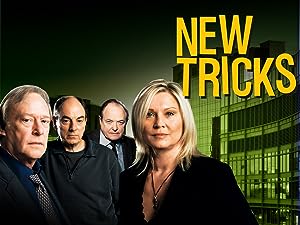 Tom McCaffreyReviewed in the United States on January 31, 2017
5.0 out of 5 stars
Old Dogs Indeed
Verified purchase
Maybe it's because I'm an old dog myself, but this series has resonated with me from the very first episode. The characters are well developed and each one is likeable because of their individual quirks and ideosyncracies. And it is because each one brings something different to the table that their success rate is so high. Having a younger woman having to keep them all moving in a general direction adds to the overall positive chemistry of the show. The story lines are different and entertaining. I highly recommend this program.
4 people found this helpful

Amazon CustomerReviewed in the United States on February 25, 2011
5.0 out of 5 stars
AT LAST SEASON THREE IS HERE
Verified purchase
This release of Season three (3) of "New Tricks" has been eagerly anticipated by me because I loved Seasons 1 and 2 of the series. I can now add Season three (3) to my admiration list. I love Season three (3) for it continues what I loved in the preceding seasons. That being a very well written and acted series about some retired older cops returning to a "cold case" unit to solve some heinous unsolved cases in often very amusing ways mainly because the old returning cops have "Issues" that their leader (fabulously played by Amanda Redman of "Little Dorit") must deal with.

Season three features eight (8) episodes on three (3) discs running about 2 hrs each and it is so very good. I can hardly wait for future releases of this series because it is such a very good British murder/mystery/detective series that is certainly different in wonderful ways from others in this genre--it features older cops solving crimes often in very amusing ways. I love it.

By the way, the third episode entitled "Old Dogs" is simply wonderful. That episode is filled with humour and involves a serial killer that kills certain kinds of dogs not humans as thought intially but our team finds out, after awhile that humans are his/her victims too including one of their own that narrowly escapes death.

Mr. MacReviewed in the United States on November 26, 2011
5.0 out of 5 stars
Whacky and entertaining mysteries
Verified purchase
We love New Tricks. The mysteries are good, but it it the interaction and actions of the three retired policemen brought back to solve unsolved crimes that is like the three stooges. Jack has conversations with his dead wife enshrined in his back yard, Gerry, the lad, with many ex-wives has an eye for the women, and Brian the near bipolar with a total recall memory. Sandra, the chief inspector, tries to rein in this zany bunch. They solve crimes in many unorthodox ways, which they can get away with as they are not really cops. The acting is supurb. They can do as much with a glance as with a paragraph of script. WE order these as fast as they are available. Series Six will be available in January. May may not have noticed that Jerry Waterman also sings the theme song as he did in previous series that he starred in. This is not a mystery series in the vain of Midsommer Murders or Frost or Lewis, but for pure entertainment it is one of the best.

MycroftReviewed in the United States on March 6, 2011
4.0 out of 5 stars
The Good, The Bad, and the Ugly
Verified purchase
New Tricks is one of the most enjoyable series to come from the prolific guys at the BBC. This set is no dissappointment, the "Old Dogs" deleiver and serve up mirth and mystery enough for any fan and for the fans to be they'll make you run right out and order the other two discs. Do yourself a favor and order them from some reliable vendor and not Amazon. The discs I got in Set Three were fine until I reached disc three. It was flawed or damaged in some way and would not play. Internet return proceedures are so complex and draconian that it would be more trouble to return it than to eat it. I was going to order Set Three of Dalziel and Pascoe, but now I think I'll find another vendor. Buy the set, the show is wonderful. You will enjoy every actor and script. James Bolam and Amanda Redman are wonderful and Dennis Waterman is brilliant as the incoragable Gerry. New Tricks, new fun and will make "gettin' to the end of the day" a joy.
2 people found this helpful

Billy J. HobbsReviewed in the United States on December 16, 2013
5.0 out of 5 stars
Lots of "new tricks" for this cast!
Verified purchase
The Brits know how to create exciting, meaningful, worthwhile, suspenseful--and even funny. The cast ensemble of these early seasons works well and each episode seems original enough, so much so that I have no problem watching them. I look forward to more episodes. It is refreshing to see, especially in the UK, that Sandra is indeed cracking that Glass Ceiling, especially in police enforcement circles. It is also interesting how this group of "policemen" really is a diverse crowd, pesonality wise and they all have something substantial to offer. All those "old cases" are now finally being solved. Long live the series!
One person found this helpful

TWMReviewed in the United States on July 11, 2013
5.0 out of 5 stars
Good Brit TV
Verified purchase
I have been reading about New Tricks for a couple of years. The concept of old duffers being pulled out of retirement to tackle cold cases appealed to me as I am in early dufferhood my self. When Amazon lowered the price I bit the bullet and bought the first two seasons on DVD. I was very pleasantly surprised at how much I enjoyed it. Amazon Video on Demand has all the remaining seasons in their archives and I have been streaming them through my Vizio Blu-Ray player. Looking forward to seeing all seasons. Yes, I guess this does read like a puff piece. But it's all true.
One person found this helpful

L.M. KeeferReviewed in the United States on July 13, 2014
5.0 out of 5 stars
Witty English Mystery Series
Verified purchase
Love the use of older actors with their depth, wisdom and wit. Was looking for a British detective series that isn't too gory, has accomplished actors, fun plots and humor always helps. NEW TRICKS suits those requirements. Like to treadmill to mysteries as the suspense and problem-solving in the cases they work on makes the time go by more quickly. Glad to have found this series. It helps to have scenery that isn't too familiar, so mysteries set in England are kind of a travelogue for us Anglophiles.
2 people found this helpful

North Woods SallyReviewed in the United States on December 24, 2020
5.0 out of 5 stars
Great series
Verified purchase
I always enjoy watching this series. Still keeps you interested.
See all reviews
Back to top
Get to Know Us
Make Money with Us
Amazon Payment Products
Let Us Help You
EnglishChoose a language for shopping. United StatesChoose a country/region for shopping.
© 1996-2022, Amazon.com, Inc. or its affiliates