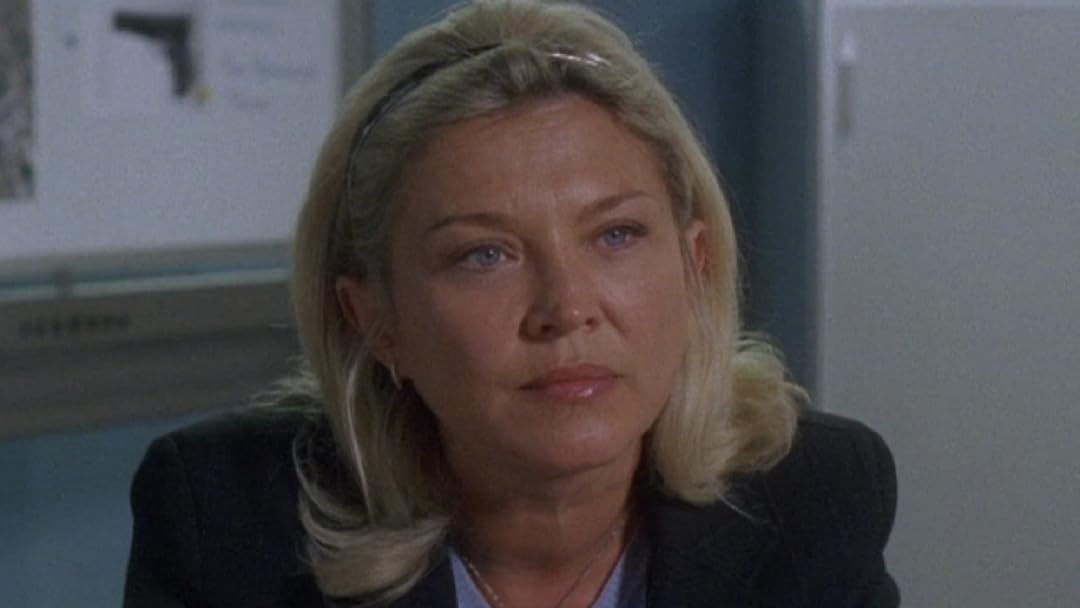 (102)2004X-RayTV-14
A team of seemingly over-the-hill detectives investigate previously unsolved cases in this crime drama. But they are finding a surprising incidence of cover-up and conspiracy in their new investigations. Are their superiors about to close ranks? Or is someone feeding them particular files? Either way, the team is determined to get to the bottom of it. These old dogs won't roll over easily.

Amazon CustomerReviewed in the United States on August 21, 2020
5.0 out of 5 stars
Excellent Series, mature consummate actors, well done murder mysteries, funny & intelligent dialog.
New Tricks is obviously part of the old line "you can't teach an old dog new tricks". But you sure can make a fresh and intelligent murder series about retired police detectives solving cold cases. The original cast for the first 5 seasons is the same and they are superb. From Sandra, the consumed "Gov na" boss, to the slightly rain-man like detective Lane who remembers literally everything from the past, but is pretty dysfunctional when it comes to daily living.
Every actor is superbly cast and the dialog is quick and often very funny. I am not British so I often need the subtitles on to catch all the very fast and subtle English humor... but love it. This show is not PC and makes no bones about the fact that the older detectives are used to doing thing sometimes the way they used to do it, and sometimes still do.. much to Sandra's dismay. BUT they get to the bottom of the crimes, maybe not always by the book.
The series actually has 13 seasons, but after season 9 I think, the actors starts to change and while it is still good, the stellar original cast is by far the best.
Watch a couple of episodes and you will be hooked.

LilyReviewed in the United States on September 11, 2020
5.0 out of 5 stars
Witty old crime solvers
For me, this show checks all the boxes: strong female lead, great cast of cranky old dudes, witty dialogue, and crime solving. No pretty people jumping in the sack, no blood and gore, no special effects bonanza.... It is more authentic than that. If you like classic British television, you should check this one out.
92 people found this helpful

BastetReviewed in the United States on July 23, 2020
5.0 out of 5 stars
Funny, intelligent stories, very talented cast
One of my favorite British series. Hope Amazon fixes the pilot for everyone, which is currently episode 1. The pilot is great. Series is strong through its entire run, even with cast changes. But the original cast and first seasons are the best.
38 people found this helpful

Candid OneReviewed in the United States on September 21, 2020
1.0 out of 5 stars
I loved and hated this series
I cannot give this a 5 star rating although I watched every episode.
It was a romp, not anything to be taken seriously at all.
I tolerated Amanda Redman as she has almost no talent for acting. I saw about 3 expressions and only 2 vocal tones to her delivery. She was either yammering orders or screaming through clenched teeth when she didn't get her way. I saw nothing to make her more than a talking head. She trained her beady eyes to a target and hurled threats to her coworkers or had a close up of her face that we are meant to admire: I did not.. When she left the show I was delighted. Her replacement was refreshing.
The original boys worked well enough together. James Bolam was always a bit above it all and I accepted it because I believed him. A very fine actor, Mr. Bolam.
Both Alun Armstrong and Dennis Waterman lost points with their parting remarks. Chewing on a massive scale from both of them.
Tamzin Outhwaite was fresh air and I really liked the new cast, Denis Lawson, Nicholas Lyndhurst and Larry Lamb. Dennis Waterman wasn't missed when he left. It was about time.
Sorry that people had attached themselves as they did to the original cast. Kind of like political views-one is born into it and no amount of logic will keep them from removing their heads from the sand.
A truly good actor can make you watch in spite of "stale" scripts. Personally, I found the writers did a good job in spite of limited acting skills.
I loved the new guys and am sorry to have seen them go as well as Anthony Calf.
By the way, never once did I see a false move by either James Bolam or his beautiful wife, Susan Jameson.
34 people found this helpful

Book LoverReviewed in the United States on September 19, 2020
5.0 out of 5 stars
Love this cast of characters
This is a fresh look at detective stories that includes retired detectives. It is very interesting hie the older detectives still have their contacts and special information for each case. I hope it continues for years. Thanks Amazon.
25 people found this helpful

ShannonReviewed in the United States on August 3, 2020
5.0 out of 5 stars
Pilot Episode Missing
I absolutely love this show but the pilot episode is missing! Instead they just have episode 1 in there twice. Do yourself a favor and go find the real pilot elsewhere so you know what's going on.
28 people found this helpful

Richard GeraceReviewed in the United States on July 11, 2020
4.0 out of 5 stars
Fun show, but Amazon screwed up the first episodes
The Pilot and Episode 1 are the same show, which is to say Episode 1 is shown as the Pilot too.

Anyway, it is entertaining and fun so far.
22 people found this helpful

river bluesReviewed in the United States on October 5, 2020
1.0 out of 5 stars
Not for me
I usually love English police dramas, and was initially drawn to this because it also had mature actores, but after 25 minutes of the first episode, I was thoroughly bored. I do realize that you need to give shows a bit of time to get interesting, but those 25 minutes felt like 2 hours.
19 people found this helpful
See all reviews
Back to top
Get to Know Us
Make Money with Us
Amazon Payment Products
Let Us Help You
EnglishChoose a language for shopping. United StatesChoose a country/region for shopping.
© 1996-2021, Amazon.com, Inc. or its affiliates