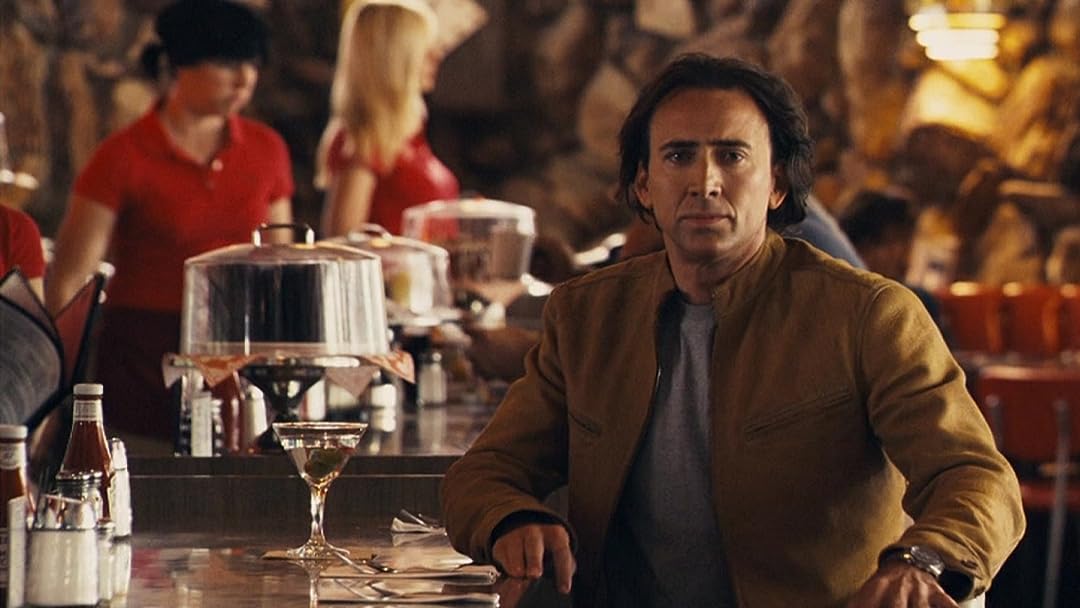 (1,891)
6.21 h 36 min2007X-RayPG-13
Las Vegas showroom magician Cris Johnson has a secret: he can see two minutes into the future. Sick of the government and scientific interest in his gift, he lies low in Vegas, performing cheap tricks and living off small-time gambling "winnings." But when a terrorist group threatens to detonate a nuclear device in Los Angeles, government agent Callie Ferris must use all her wiles to capture Cris and convince him to help her stop the cataclysm.

Okemos56Reviewed in the United States on July 8, 2018
4.0 out of 5 stars
Great Premise--so-so execution
Verified purchase
This movie is based on a Philip K. Dick short story about a man who can see the future, but only two minutes ahead. The dialogue is clunky at times. If you've read Philip K. Dick, you know that dialogue and character development weren't his strong suits most of the time. What he had was an amazing imagination for what could happen in the future and, occasionally, to write satire.

Fifty years later, the plot is reasonably predictable for those of us who have seen too many X-files too many times, and, unfortunately, the movie takes a great premise and turns it into a formulaic action movie. This means that role the lead is the only truly developed character, and it is played by Cage. He is in full Cage mode here, with a seemingly permanent angst-sorrow scowl on his face, but he does vary it more than usual. Moore and Biel play one-dimensional characters (tough cop and love interest respectively). All the other characters are small and not memorable

The great premise survived, however, and I found Cage to be a petty vice: I know he''s bad for me, but I can't stop. Anyway,
I liked the movie enough to spend a lazy afternoon watching it. Others with more discriminating tests or more experience in the genre may have a very different--and equally legitimate--opinion.

ZiaStormReviewed in the United States on December 21, 2018
2.0 out of 5 stars
No spark
Verified purchase
Cage & Biel didn't have that spark (and how I'd love to see a leading man with a woman closer to his age - I cringed when she let him touch her). And the Havasupai visit was just bizarre. I've hiked the canyon and spent the night at the bottom. It's a steep walk that takes hours there, then twice as long to return to the top. Only a fool would do so without water, a brimmed hat and good hiking shoes. For them, it's presented as a stroll to deliver a birthday gift to a single youth which makes zero sense. Does she make a special trip for every child's birthday, or just this one boy - and why? She had no apparent connection to him, special or otherwise. Then the whole FBI chasing him and trying to get Biel to drug him... And, oh yeah, how pathetic that Biel decides he must be a psychopath but stays true to him anyway. Of course we know he's not, but at that moment, she doesn't and do we really need any more sappy role models for young women? I watched the whole movie, hoping it would improve. Nope. Well, at least I got my laundry done.
30 people found this helpful

TulliaReviewed in the United States on August 12, 2018
4.0 out of 5 stars
Who Knows What's In The Future?
Verified purchase
This is about a man who can see two minutes into the future. Cris, played by Nicolas Cage, a magician in Las Vegas, has the uncanny ability to see into the future. FBI Agents, one in particular, Callie, played by Julianne Moore, is in hot pursuit of Cris for his expertise in looking into the future. Callie wants Cris to help locate in which U.S. city a nuclear bomb has been placed. Cris eludes the agents and meets Liz at a diner, and they decide to travel together to Flagstaff.

Liz says she has to make a two hour or so stop along the way which is at the Havasupai Native American Reservation located next to the Grand Canyon. Liz teaches a class at the reservation. The view of the Grand Canyon is spectacular.

Liz and Cris leave the reservation and go to a remote cabin where they stay the night. The next morning, Liz goes to town to purchase some supplies and she is accosted by FBI Agent Callie who shows her a video about Cris indicating that he is a fugitive from justice. Callie convinces Liz to slip a pill in Cris' drink to make him sleep and the agents will take him away. Will Liz put the pill in Cris's orange juice?

This is an intense film, filled with a lot of action.

Yiannis PReviewed in the United States on January 1, 2019
2.0 out of 5 stars
A Mess
Verified purchase
The movie might have been palatable if in the last half hour or so the screenwriters, in a mistaken belief of their intelligence, did not keep piling on cutesy complications to the scenario. Equally devastating is the fact that only one of the protagonists was likeable--Jessica Biel. The permanently sour expressions of Nicolas Cage and the wooden face of Julianne Moor only magnified the movie's overall unpleasantness.
14 people found this helpful

joel wingReviewed in the United States on January 27, 2021
1.0 out of 5 stars
Completley over the top and ridiculous story
Verified purchase
Nicholas Cage plays a Las Vegas magician who can see into the immediate future. At the start of the movie he saves a cashier at a casino from being robbed and then escapes casino security and a high speed chase by the police. The writers took that and went completely over the top by having Cage pursued by the government who want his help to find Russian nuclear devices that are brought into Los Angeles. Then it gets sidetracked with a love story between Cage and Jessica Biel. Not happy with that they throw in some big action scenes as well. Talk about writers with wild imaginations who couldn’t say no.
C
4 people found this helpful

C. S. PetersenReviewed in the United States on October 26, 2018
2.0 out of 5 stars
I was very frustrated with this movie
Verified purchase
I wanted to see a fun romp with Nick Cage. Instead we get this creepy emo Cage who absolutely refuses to help his country STOP A NUKE. What a jerk. I lost all respect for and interest in the movie after the plot was completely spelled out for him and he just ran away, because he didn't want the inconvenience of working for the government. Screw you movie. Next time I want to see a fun romp I'll watch Rampage.
14 people found this helpful

ReviewReviewed in the United States on November 5, 2018
4.0 out of 5 stars
The Charming Jessica Biel
Verified purchase
'Next' is a compelling sci-fi film that revolves around Cris Johnson who has been endowed since birth with precognition, but he can only see two minutes into the future. His abilities come to the attention of FBI agent Callie Ferris portrayed by the excellent Julianne Moore as she and her team seek to find and diffuse a stolen Russian nuclear bomb that has been snuck into the US by terrorists who intend to detonate it. Cris' main interest however is a young woman he has seen in his visions. He regularly visits a diner where he knows he would meet her. Lo and behold she shows up one day at the expected time. The young woman Liz Copper portrayed by the charming Jessica Biel plays a pivotal role in one time line that proves problematic, however Cris has the ability to see results of his actions in the future and experiments with different scenarios to find the optimum course of action. The film builds plenty of tension and its action sequences are fast enough that four stars are well-deserved. The romance developing between Cris and Liz works very well and is a nice touch in the plot.
6 people found this helpful
See all reviews
Back to top
Get to Know Us
Make Money with Us
Amazon Payment Products
Let Us Help You
EnglishChoose a language for shopping. United StatesChoose a country/region for shopping.
© 1996-2022, Amazon.com, Inc. or its affiliates