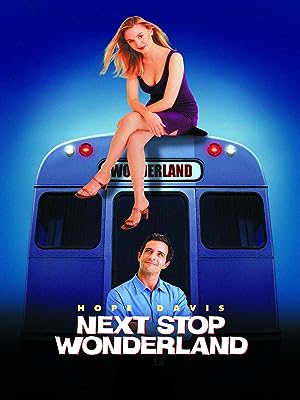 Tim LukemanReviewed in the United States on November 11, 2013
5.0 out of 5 stars
A quality romantic comedy that works to perfection
Verified purchase
The past two decades have seen a slew of alleged romantic comedies that are neither, just a formulaic collection of cliches & crudity. What a pleasure, then, to realize that it's still possible to make a genuine romantic comedy with all the charm & wit that used to be found in such films! True, this film is now some 15+ years old; but it remains as fresh & delightful as the first time I saw it when it originally appeared.

An early film for Hope Davis, she shines in this story of a young woman who has pretty much sworn off finding a decent romantic partner after her relationship with an overly earnest political activist (a then-unknown Philip Seymour Hoffman) falls apart. Her too-helpful mother (the wonderful Holland Taylor) decides to fix that by placing a personal ad for her daughter in the local paper -- and the next thing she knows, there are 64 messages from a mixed bag of would-be suitors ... or is that the bottom of the bag?

At the same time, an aspiring marine biologist (Alan Gelfant) working in a Boston aquarium is trying to get his own life in order ... and it's equally frustrating & funny to see how our two leads keep missing each other by a fraction of a second throughout the film, as they're clearly perfect for each other. I'd call it "quirky" if not for the downside of the word, which can sometimes equal "thin & badly plotted" -- though that's not the case here.

If anything, the film has a somewhat wistful, melancholy undercurrent, one that asks questions about destiny (or the lack thereof), the possibility of finding meaningful love that'll stand the test of everyday life, and that elusive search for real depth in one's life. Our heroine's late father gave her good advice which the viewer should take to heart: "Try to contemplate one beautiful thing every day." How many of us do that? How many of us even consider the possibility?

I've found this to be a very rewatchable film over the years, one that's just as appealing & thoughtful on the 20th viewing as on the first. Why can't Hollywood learn from a film like this & rediscover the art of making romantic comedies that are for genuine grownups, not perpetual adolescents? Highly & happily recommended!

This review is solely in regard to the QUALITY of this newest (2011/2012) DVD release. As I own the previous release from the same studio and have compared them.

In comparison, this newest DVD is 1) four full minutes shorter than the other version, which my DVD player's graphics proved after checking both DVDs on it, and which also can be seen in the 92-minute running time printed on the package of this newest version vs. the 96 minutes printed on the package of the older version (I haven't checked WHERE the footage is missing, but it's definitely not in the opening or closing credits being expanded or reduced, but elsewhere).

2) This new DVD had 10 haphazardly started/ended "chapters" which start in really odd places--always in the middle of scenes! And on the disc's menu, believe it or not, they are listed merely as "Chapter One", "Chapter Two," etc., with NO other info-- no names for the scenes, no pictures . . . Whereas on the preferred older DVD release, the menu for the chapters is a very fancy one, in the form of a train line map, and with a name for each chapter and a photo for each chapter. FAR better than the new 2011/2012 DVD release. The older DVD's chapters also start and end in logical, proper places.

The film's print is identical on the old and the new DVDs, also it's the same aspect ratio: 1.85:1 and enhanced for 16:9 TVs. It's sad that no improvement was made to the picture quality, but to be fair, it was excellent on both old and new versions, despite a bit of tiny squigglies in the backgrounds of both if one pays close attention.

Even the older clamshell case is hard, whereas the new one's is soft, despite also being plastic.

Buy the OLDER version of this DVD release, which is better in ALL ways.
14 people found this helpful

Neutron JackReviewed in the United States on March 12, 2015
4.0 out of 5 stars
Not your usual boy meets girl story.
Verified purchase
Caveat, I am a romantic comedy fan.
This is one of three movies, from the late 1990's that were wonderful and clever stories and totally overlooked by the general public. I don't think any of them had a general release. The only reason I found them, I was working at Blockbuster my junior year in college and we got to check out movies for free.
The "secret" rendezvous scene was my favorite scene.
Hope Davis' career was at it's high point. Philip Seymour Hoffman turns in a good performance, before he became famous. Alan Gelfant puzzles me, he did a very credible performance, but his career never really took off. I could see him stepping into the "everyman" role played by Bill Pullman or Jeff Daniels.
6 people found this helpful

JayBeeReviewed in the United States on August 12, 2005
5.0 out of 5 stars
I Love this Movie
Verified purchase
If ever there was a movie I had a soft spot for, it would be Next Stop Wonderland. If I'm down or need to relax or just want to sit back and see familiar sights from the time of the movie, I pop this in and immediately feel better. It's like therapy to me.

In some ways it's tough for me to really define the movie or the characters & I don't want to give it all away. Erin struggles to overcome some of the losses in her life and to find a way to move forward while Alan is an individual who fights to fulfill his dreams, which he figured out later on in his own life, while maintaining his integrity. But the movie is so full of coincidences and near misses for these two very honest individuals that you are left waiting for the moment when they come together, and when they do, it is actually just the right time. From the dating service, to Alan seeing her while in the fish tank, to the photographer putting her in the picture... there are so many things in this movie that you may have missed after seeing it the first time that you'll catch the next few times around.

I definitely recommend the movie. I love it. Can't say that enough. And it takes place in Boston, and you get a good view of some of the sights and places in Boston. I've actually been the the Burren & still sometimes hang out in the Somerville/Cambridge area. And the New England Aquarium really has been renovated since then (1998) and is off of the Blue Line (the Wonderland stop is actually the last stop on the Blue Line - there's your symbolism!).

I also love the movie because the soundtrack, done by Claudio Ragazzi and Arto Lindsay, is nothing short of stellar. The original score perfectly fits the mood of the CD for both characters and other than the classic Bossa Nova by Elis Regina and Astrud Gilberto, you have some very nice works by Bebel Gilberto (daughter of Miucha and Joao Gilberto) before her feature album came out, that I haven't seen her release elsewhere, including a sensational version of "One Note Samba/Girl from Ipanema" with the amazing work of Vinicius Cantuaria.
12 people found this helpful

VelcroReviewed in the United States on April 9, 2013
3.0 out of 5 stars
Sometimes a Personal Ad Can Be a Good Thing
Verified purchase
Hope Davis and Alan Gelfant do a good job at showing how just being yourself can bring its own rewards. It doesn't show men in a good light and that's why I would classify it as a "chic film" even though it was aptly directed by a man, Brad Anderson. It's funny and a very enjoyable comedy. It's also a good training film for the guys and how to behave when going on a blind date. When a decent chap comes along that can take his eyes of off himself and truly get involved in the conversation, then any woman would light up, even Hope Davis. IF all the men characters weren't all portrayed as egotistical self-absorbed juveniles then I could rate it 4 stars. It's a delightful comedy regardless.
One person found this helpful

DerekReviewed in the United States on August 2, 2020
1.0 out of 5 stars
This should be free - don’t waste your money
Verified purchase
Could not get into the characters at all...found the overall cinematography and acting very annoying. Painful 90s style filmmaking and chick-flick storytelling.
Stopped watching after 20 minutes.

Bratty AnnReviewed in the United States on May 1, 2014
5.0 out of 5 stars
Classified Dates
Verified purchase
Hope Davis rallies in this delightful story as a single daughter with an interfering mother (Holland Taylor) who puts an ad in the lovelorn classifieds seeking true love for her daughter. Davis's breakup boyfriend, played by a classic Phillip Seymour Hoffman, is cause for her to go along with some of the men who have responded to her ad. Crossing the storyline are characters who seem to cross paths throughout, creating the fun atmosphere and the various situations in which the characters find themselves. I was surprised at how delighted this wonderful story captured my heart.
2 people found this helpful

Gabrielle AReviewed in the United States on May 11, 2019
3.0 out of 5 stars
Okay if nothing else to watch
Verified purchase
Bought this movie for my Humanities class. It was okay but I was expecting more. If you like bossa nova then you will at least enjoy hearing the classics of Brazilian music. The actors were fine but you forget the whole thing once the movie is over
One person found this helpful
See all reviews
Back to top
Get to Know Us
Make Money with Us
Amazon Payment Products
Let Us Help You
EnglishChoose a language for shopping. United StatesChoose a country/region for shopping.
© 1996-2021, Amazon.com, Inc. or its affiliates