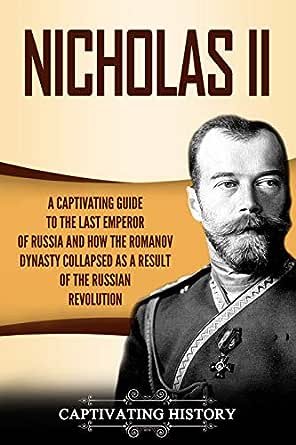 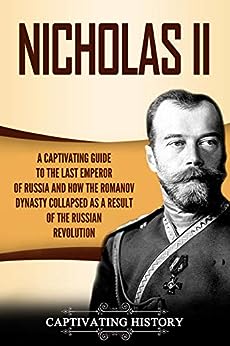 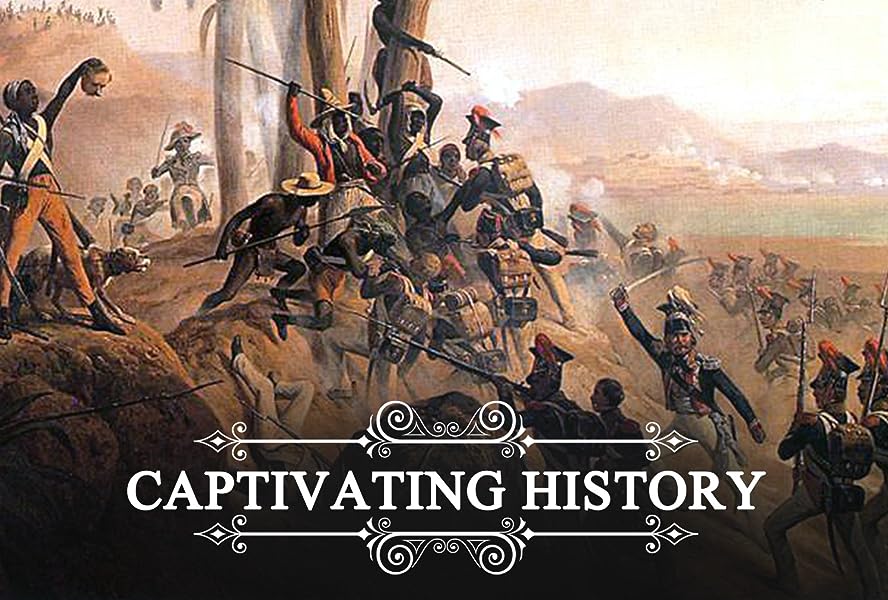 Nicholas II: A Captivating Guide to the Last Emperor of Russia and How the Romanov Dynasty Collapsed as a Result of the Russian Revolution Kindle Edition

4.4 out of 5 stars
4.4 out of 5
40 global ratings
How are ratings calculated?
To calculate the overall star rating and percentage breakdown by star, we don’t use a simple average. Instead, our system considers things like how recent a review is and if the reviewer bought the item on Amazon. It also analyzes reviews to verify trustworthiness.
Top reviews

randall hunter
5.0 out of 5 stars A tragic story of the fall of a 300 year old Dynasty.
Reviewed in the United States on August 27, 2020
Verified Purchase
This book is a must read for anyone wishing to understand why tsarism ended and what happened to the family after his resignation. It tells the story in an extremely readable and straight forward manner. Highly recommended.
Read more
Helpful
Comment Report abuse

Nick Masini
5.0 out of 5 stars Loved it!
Reviewed in the United States on October 22, 2020
Verified Purchase
Great book. Loved how well it told the history, but also got to the point quickly and didn't mess around.
Read more
Helpful
Comment Report abuse

JJares
5.0 out of 5 stars Exceptionally Well-Written
Reviewed in the United States on August 3, 2020
This is such a well-written book.  I've read several lengthy books about the Romanov family and I'm in awe of the brevity, yet thoroughness of this story.  I really appreciated the fact that the author did NOT go back 300 years to explain the entire Romanov family.  The author took us back enough to understand what the Romanov's believed and how they viewed ruling.

Nicholas II was a good man who was a poor leader. This book explains clearly his misunderstanding of the Russian people and his inability to look outside himself or his inner circle for solutions.  He was blessed with an able partner but the two of them were used to autocratic rule, not compromise.  This book explains that in 1991 when the USSR collapsed, the true info about the deaths of the Romanovs would be revealed.  In 2000, the Russian Orthodox Church officially canonized the Romanov family as saints.

This book is exceptional in that it explains complex thoughts and ideas in a straightforward way, which makes for an easy understanding of a complex time.

Hunter Wallace
4.0 out of 5 stars A Great Overview of Nicholas II
Reviewed in the United States on August 1, 2020
In "Nicholas II," Captivating History surveys the life of the Russia's last tsar. The content is stellar, although this book could have benefited from the inclusion of visual media.

This author argues that "Not only did the tale of Nicholas II lead to an enigmatic assassination of an entire family, but it also marked a distinct turning point for the history of Russia that affected the world" (Loc 45). Readers learn the truth in this claim through the final tsar's history from his birth on May 6, 1868 to his execution on July 17, 1918.

As expected, Captivating History demonstrates its historical diligence through scholarly research and a robust bibliography. Unlike previous releases, however, this title does not feature any visual media. Being able at least able to match names to faces would have been useful. Instead, there is nothing but text.

"Nicholas II" is a wonderful work of historical passion. Its lack of imagery hinders its effectiveness, though. In the end, history fans and casual readers alike will enjoy this volume for what it is: a terrific guide to Nicholas II presented in a concise format.
Read more
2 people found this helpful
Helpful
Comment Report abuse

A. Carman
5.0 out of 5 stars Good writing!
Reviewed in the United States on August 2, 2020
This is one of my favorite historical topics so I was happy to see this book. The writing is crisp and clean as always and this book I felt was well targeted to only explaining things immediately relevant to Nicholas himself rather than starting way back in the beginnings of the Romanov Dynasty. It also had a balanced feel for a complicated man. Russia has had plenty of czars who were bad men but were "good" at ruling. Nicholas is one of the few we might call a good man who was bad at ruling. But the explanations and criticisms were fair. I think it serves as a good introduction to an important event in world history.
Read more
3 people found this helpful
Helpful
Comment Report abuse

Michael States
5.0 out of 5 stars The collapse of the Romanov family
Reviewed in the United States on August 2, 2020
This concise history chronicles the evolution of the Russian Revolution and the end of a 300-year-old imperial dynasty. We learn of a cherished heir to the Russian throne who became the last tsar of the nation. This heir, Nicholas II, was raised under the influence of a mentor who championed nationalism, racism and religious intolerance which affected the relationship Nicholas had with the people of Russia.

The author walks us through the events impacting Nicholas from his young years until he took ownership of the throne. He was unprepared to rule and handled his proxy to intermediaries to rule. Such inattention resulted in disarray and cemented his reputation as a distant leader. Curiously, he was a strong leader when it came to foreign relations and foreign policy.

I invite you to read this publication as it will introduce you to the Russo-Japanese War which preceded WW I and the beginning of the Russian Revolution with the event known as Bloody Sunday.
Read more
One person found this helpful
Helpful
Comment Report abuse

M.K. Staffeld
4.0 out of 5 stars Nicholas II - A Man Unprepared To Rule
Reviewed in the United States on August 2, 2020
Many know of Czar Nicholas II as the last of the Russian czars, he and his family killed during the Russian Revolution. But there was more to Nicholas that simply being the 'czar', as originally it was his brother who was supposed to be the ruler, not him. If you're interested in learning more about Nicholas and why he failed as a leader, this is a good place to start.
Read more
One person found this helpful
Helpful
Comment Report abuse

Ellamae Y Parker
5.0 out of 5 stars Surprising
Reviewed in the United States on August 2, 2020
Downloaded this book not sure what to expect. My eyes were opened to a part of history I knew nothing about.
The story touches on Nicholas ll life from childhood to his tragic death. He was I'll equipped to handle ruling a country already in turmoil.
He did the best he could with what was given him but sadly to many it was not enough.
The writer of this book did an excellent job telling Nicholas ll story.
Read more
One person found this helpful
Helpful
Comment Report abuse
See all reviews