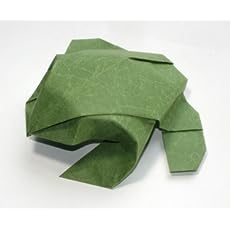 Nick has been folding paper since the early 80's and has been a member of the British Origami Society for over 25 years. He has contributed articles and designs for the magazine in almost every issue since 1987 and has served on their council for over 20 years. He edited their bimonthly magazine for 5 years and has maintained their web site for over 15 years. In 2004 he was awarded the "Sidney French medal" - the highest award the society can offer, in recognition of his outstanding contribution to origami. In 2009 he was made an honorary member of the Society.

Since the mid 80s, Nick has worked as a professional origami teacher, travelling round schools, libraries, youth clubs, hospitals and art galleries, teaching origami and paper artwork. He runs sessions with people of all ages and physical abilities. He currently teaches several sessions a week in primary schools.

He has appeared on television in England and Germany, and has fulfilled numerous commissions for magazine, television and internet advertising campaigns. Over 200 of his original origami creations have been published in 13 countries around the world, including a Japanese newspaper. He has submitted work to many prestigious exhibitions around the world. In 1994 he won three of the five categories for the International Alice in Wonderland Origami competition. His origami website is www.origami.me.uk

He has written and illustrated over thirty origami books, with total world-wide sales of several millions. Nick is in his early 50's and lives in Sheffield, England with wife Alison, grown-up children Daisy and Nick plus cats Rhubarb & Matilda. As a former professional musician he still performs solo improvised ambient guitar concerts. 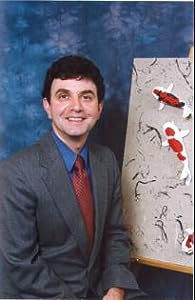 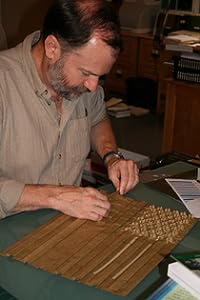 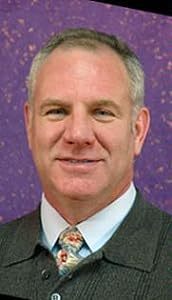 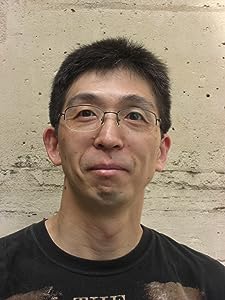 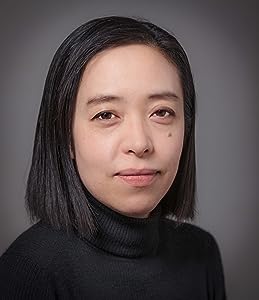 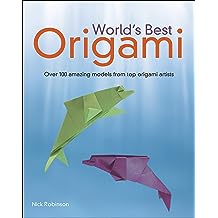 Join the fold and discover this timeless art form.

World's Best Origami is an amazing collection of more than 100 of the most unusual and best-loved origami patterns ever created. Expert origami artist Nick Robinson has collected traditional origami patterns as well as his own pieces and those from some of the greatest origami artists in the world - many in print here for the first time ever.

? More than 100 pieces-the most comprehensive origami book on the market

?Projects rated from beginner to advanced and include everything from boxes, containers, geometrics, and abstracts to figures, birds, animals, and flowers, and more-this unique volume has something for everyone at every skill level

?The only book to include the works of several masters of the craft, including Edwin Corrie and Francesco Guarnieri, as well as the author 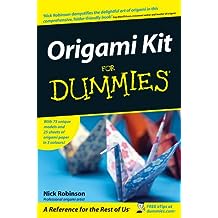 Origami Kit For Dummies Feb 14, 2011
by Nick Robinson
( 35 )
$14.99
Origami Kit For Dummies gives you all the material you need to get started in origami. Included in the kit is an expert guide book to origami, covering the different bases and techniques you need to create a huge variety of models. Illustrations and detailed instructions show you how to make 75 unique models, such as a frog, a settee, fantastic geometric shapes and even a festive Santa! There are also 25 sheets of 5x5" origami paper in five fun colours. So get folding, and show off your creations in style!
Discover How To:
* Get prepared to start folding
* Understand the international language of origami
* Fold all the basic bases
* Source your paper
* Design creations and draw your own diagrams
About the author
Nick Robinson is a professional origami artist, and has been "folding paper" for 25 years. He has been a member of the British Origami Society for over 20 years, and currently he edits their magazine, as well as maintaining their website.
Read more
Other Formats: Paperback 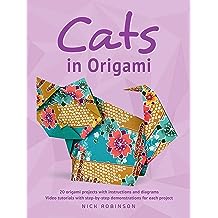 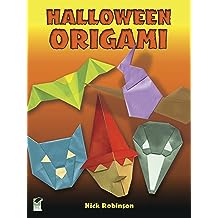 Halloween Origami (Dover Origami Papercraft) Jun 19, 2013
by Nick Robinson
( 1 )
$8.50
With its host of haunting creatures, this festive compilation of original models will add spice to any paperfolder's holiday. More than twenty projects, illustrated with photos and two-color diagrams, range from easy to fiendishly challenging.
Fold a couple of black cats for your Halloween decorations, and make company for them in the forms of a bat, ghost, and vampire. You'll find witches galore among these figures, as well as a cauldron and a tombstone, fearsome fangs and a grasping hand, and other creepy but fun seasonal motifs.