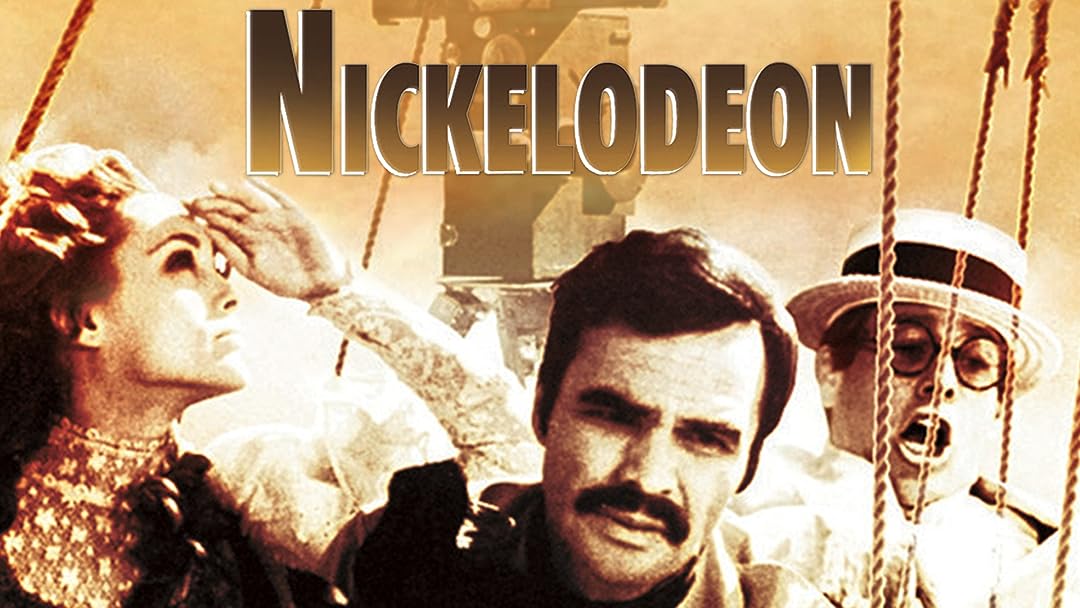 (53)
2 h 2 min1976PG
Burt Reynolds and Ryan O'Neal star in this heartfelt valentine to the early days of moviemaking. O'Neal is the film director who literally stumbles into his job, and Reynolds is an overnight screen hero. Based on actual reminiscences of such veterans as Raoul Walsh and Allan Dwan.

V. Risoli-BlackReviewed in the United States on November 17, 2012
4.0 out of 5 stars
Double Feature Worth the Dough
Verified purchase
This "Director's Choice" from Sony Pictures and Columbia Pictures features two films by Peter Bogdonovich: the Director's Cut his now classic drama "The Last Picture Show" from 1971 (which always good to have and which Sal Mineo first brought to his attention as a film property) and also two versions of his 1976 "Nickelodeon," something Bogdonovich was to capitalize on in his rocky career, valentines to other people's films, which even "Last Picture Show" shares in. The two versions are the original theatrical version in color and the new director's cut in black and white, something in the commentary he says he originally hoped the film could be done in. "Nickelodeon" strives to present the early days of silent film-making in the same slapstick that was usually presented in such films with clips from "Birth of a Nation" in its obligatory homage to Griffith. It deserves its black and white transfer. In "Nickelodeon"" Bogdonovich does not leave himself out of the loop of the many directors he presents anecdotes (like Leo McCarey because he was dead remained uncredited unlike then still living directors, Raoul Walsh and Allan Dwan) with taking parts of more successful Bogdonovich hits like "What's Up, Doc?" and "Paper Moon" and in the commentary laments not being able to use Cybil Shepherd in the main female role opposite the often used Ryan O'Neal and Burt Reynolds (who with Shepherd had starred in the director's previous big flop musical "At Long Last Love" which remains unavailable on home video) and also Tatum O'Neal, John Ritter, Stella Stevens and Brian Keith. An inexperienced actress, Jane Hitchcock played the main female lead and she does it haltingly and only adds to the cardboard, manufactured performances in an endless array of anticipated slapstick that never tells a moral of any kind, either in what was re-added to film for the director's cut that makes more sense of the film as the film has no real life to it. But it has a great professionalism that is always present in his films, and relegates his failures as a step above many other directors. In the commentary, Bogdonovich says that his next two films after "Nickelodeon": "Saint Jack" and the disastrous "They All Laughed" were two of his best, I wonder if he would now take credit for his first in 1968 then as Derek Thomas, "Voyage to the Planet of Prehistoric Women" before his triumphant "debut" under his own name with his brilliant Hitchcock homage "Targets" (also in 1968).
One person found this helpful

CynthiaReviewed in the United States on September 22, 2013
5.0 out of 5 stars
Loved making this movie!
Verified purchase
I was in the film Nickolodeon as an extra "Indian woman" in the Chatacawan dance troupe. They cut out my close up and a few of my 8 scenes from the original shown in the theaters. I wonder what else they cut in order to cut the time down.

I had alot of fun working on this film. I worked for three months while meeting many talented, wonderful, and interesting people and a few not so great. Tatum O'Neal was a joy to work with for me. We sat at the piano one day and had a nice chat. Most people treated her like an adult but she was still just a child at heart. Such a loving little girl.

Burt Reynolds was sick for most of his time here in Oakdale although, made a great impact on the Indian people who worked with him. He became a man of great respect whether he knew it or not. He was proud and professional. The people learned from him.

Watching this movie was like stepping back in time!

Samantha C.Reviewed in the United States on September 7, 2012
5.0 out of 5 stars
Old Time Camera
Verified purchase
I thought these two films were great. It is an awesome product to my avant garde collection!
Nickelodeon (not to get confused with the television network) is a preety goofy ragtime film that takes you back to an era where silent films were big. I enjoyed it! Found it comical. The Last Picture Show I really found myself into is a coming of age story about a dying Texas town and the teens who endure their last days together. Excellent drama! And great storytelling! Both films have their style. If like nostalgia, these films are for you.

Stuart DiwellReviewed in the United States on August 10, 2013
5.0 out of 5 stars
Two great movies with excellent extras
Verified purchase
Peter Bogdanovich started at the top with his wonderful movie Targets in the late 1960s and then hit several more home runs into the 1970s and then it all started to fall away.
So this twin pack is a real must for fans of this director. They are wonderful prints of essential movies and the extras including a different cut and black and white version of Nickelodeon are to die for
One person found this helpful

LCDRJMCReviewed in the United States on December 11, 2017
5.0 out of 5 stars
Great Movies
Verified purchase
Great pair of movies from Peter Bogdanovich.

R. E. SamsonReviewed in the United States on February 18, 2009
4.0 out of 5 stars
Nickleodeon: A Lost Charmer!
Verified purchase
Last Picture Show needs no endorsement, but Nickleodeon, unavailable and largely unknown, is a charming attempt to capture the beginnings of the film industry. Just a bunch of guys trying to make some bucks, Nickleodeon aptly portrays the casual way so many of our early films were made and how their makers became aware they were producing Art. Funny, informative, charming, sometimes sharp, this is a lovely film reflecting Bogdanovich's film historian roots. It ably captures both the slapstick origins and extemporaneous production of the film pioneers' invention of an industry.
2 people found this helpful

Matthew TerryReviewed in the United States on March 24, 2009
4.0 out of 5 stars
Wonderful Film
Verified purchase
This has been one of my favorite films of all time. Yes, it falls into slapstick silliness once in a while, but for a film that is a loving tribute to the beginnings of the movie industry - it doesn't go wrong very often.

I have waited FOREVER for this film to be released on DVD and I hope that they do it justice (widescreen, extras, commentary).

Great movie with an amazing cast. It's about time it was released on DVD.
3 people found this helpful
See all reviews
Back to top
Get to Know Us
Make Money with Us
Amazon Payment Products
Let Us Help You
EnglishChoose a language for shopping. United StatesChoose a country/region for shopping.
© 1996-2021, Amazon.com, Inc. or its affiliates