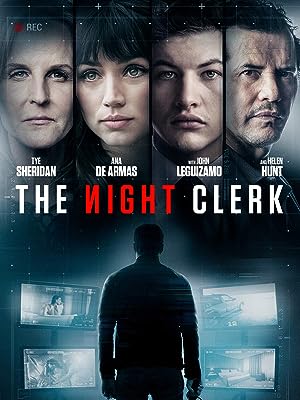 (1,193)5.51 h 30 min2020X-RayR
While on duty, a young, socially challenged hotel clerk (Tye Sheridan) witnesses a murder in one of the rooms but his suspicious actions land him as the lead detective’s (John Leguizamo) number one suspect.

JeannieReviewed in the United States on February 24, 2020
5.0 out of 5 stars
Much better than we thought it would be
Verified purchase
There were no reviews when my husband and I rented this movie but the premise looked interesting so we gave it a watch. It turned out to be one of the better movies we've seen in a while.

It IS a more quiet and slow paced movie but it keeps you invested in the story and Tye Sheridan really does an impressive job with this character he plays. Helen Hunt couldn't be more perfect as his mother. My husband quite honestly normally falls asleep a few times during this type of movie but The Night Clerk actually kept him interested enough to stay awake. ;)

The ending seemed slightly unfinished at first but then we had a little time to process and we were both satisfied with it.

JimmyCanDoReviewed in the United States on March 8, 2020
5.0 out of 5 stars
Good old fashion murder mystery, artistically done in both story line and simple execution ....
Verified purchase
The Night Clerk is way better than I thought it would be. Before watching it, I just felt the story sounded a little too simple. But I'm glad I rented it and gave it a try, because it's anything but simple. A good old fashion murder mystery, with a very modern update feel to it - in both story line and simple execution. Part of the subject of the story - part of the actions of the lead characters - follow a theme along the lines of the old "film noir" movies of Hollywood (1940-1955) ... film noir - bleak side of human nature. I really encourage you to give this artistic film a try as well. And if you like this movie, definitely watch Tye Sheridan in "Detour" another tribute to film noir. It's because of Detour I found this movie. Sort of a Detour, if you will, of my own...
7 people found this helpful
Report abuse

Renegade: Bold As LoveReviewed in the United States on April 9, 2020
5.0 out of 5 stars
Brave Film with Super Cast — And Why de Armas is Now a Star
Verified purchase
It’s hard to praise a film about what is — or certainly appears to be — a hotel clerk who has planted tiny WiFi cameras in rooms to watch guests doing the nasty as well as mundane things. There is that instant “ewehhh” reaction to seeing the young clerk with multiple views in a room watching a couple have sex. And wasting no time, that sex scene turns to a murder scene. In the tradition of a classic like Hitchcock’s Rear Window, the clerk sees a little too much.

At this point, we also learn that the clerk is a bit off. He has a form of autism and has problems communicating with people. He lives at home with his mom, hides his surveillance activity and we learn that he spends his time sitting watching people talk normal to learn how to do that too. Okay, a big leap of faith and a stretch here. He could also watch any old movie or TV show if that was all he wanted. None of us want to check into a hotel to be watched by the night clerk or anybody else so he obviously has more than communication problems. Technically, he’s unwitting perv, and witnessing a murder between a man and woman doesn’t stop him.

He gets transferred to a different branch of the hotel chain and starts setting up cameras again. This time he has a new guest who is very attractive — and very friendly. She very quickly begins interacting with him, and we wonder why. The woman, played by the hot as can be Ana de Armas, seems drawn to this awkward loser outcast and befriends him to the point of letting him know she’s out for a nude swim and wants a little cuddle. She says she had a brother who had the same illness and had died, hence the sympathetic attraction.

If only real hotties like that were so kind. They are the Unicorns and of course those don’t exist. I’d abandone everything and work for minimum wage as a hotel clerk if Ana de Armas came in and threw herself at me. As you can probably figure out, it’s really not that simple. Remember that murder at the beginning? Well, the murderer does and knows the clerk does too. Now, all the pieces come together and very much like a Hitchcock movie full of illusions, perceptions and betrayals all line up to create an excellent suspense thriller when one wasn’t expecting one. He still is a perv, but sadly not a bad person. He becomes a victim of his own problem and the way the story comes together is very effective.

All of the acting is fantastic, and it has all the traits of a very low budget indie movie. There in the middle of it is de Armas playing in a very small non-starter indie. Between superstar roles in Knives Out and as the next Bond girl, she adds the magic sauce to this interesting little film. Really good actors will mix big and little films. To-date, she’s been pure magic in every film she’s been in, and this film is no exception. She rips the hotel clerk up like the cheap carpet in the rooms. Put it all together and you have a strange, but fascinating, movie that shows a disabled person gone way astray and what can happen to the lost and lonely.

Bravo to this brave film that shows this story from as many views as the night clerk has hidden cameras in the rooms — and In his mind.

AllisonReviewed in the United States on May 17, 2020
2.0 out of 5 stars
Tye Sheridan is the only reason to watch this movie
Verified purchase
Tye Sheridan plays Bart, a tech savvy night clerk with Asperger's Syndrome who tapes guests in the hotel rooms so he can observe and imitate their social behavior. Ana de Armas plays the femme fatale who is staying at the hotel who Sheridan's character becomes attracted to. Sheridan does a very good job capturing the nuances and idiosyncracies of someone who has Asperger's, and he makes you sympathize with Bart despite the fact that his character is violating guests' privacy. The rest of the cast is just serviceable and not particularly memorable. I thought de Armas was just okay as the female lead. Her accent seems to fluctuate from American to Spanish and back again. The pacing of the film is very slow and dull, which is not good if this film is supposed to be a suspenseful thriller. The twist at the end was nothing ground breaking.
One person found this helpful
Report abuse

ClariceReviewed in the United States on April 8, 2020
3.0 out of 5 stars
Disappointing
Verified purchase
Framed as a thriller... but kinda meanders along for a LONG time in more of a character exploration of a guy with aspergers and his relationships. Then in the last 5 minutes they seem to remember it was supposed to be a thriller... and try and pull it back.

A little too late IMHO. If you're looking for a relatively decent film, sure this is watchable. But thriller? Barely.
5 people found this helpful
Report abuse

Russell SReviewed in the United States on January 9, 2021
5.0 out of 5 stars
Tye Sheridan is magnificent
Verified purchase
Tye Sheridan is simply amazing. John Leguzamo is a wonderful character in this, he is the detective. Tye is Bart and he works at the reception desk of a hotel. He has Asbergers Syndrome. A woman is murdered in one of his rooms and oh, by the way, he has cameras set up in the rooms to peep. This movie is funny at times and the only real problem is that it is very easy to figure out who done it and what the woman who flirts with Bart is up to also. This is a very entertaining movie all because of Tye and his mother is played by Helen Hunt who is okay. I fully recommend this just to see Tye Sheridan and John L.
Report abuse

Hande ZReviewed in the United States on May 31, 2020
3.0 out of 5 stars
Not noirly dark enough
Verified purchase
This is a watchable film noir but not enough to be remembered for long - like Fargo or A Simple Plan. Tye Sheridan plays a high-functioning autistic young man, Bromley, and Ana de Armas (Ben Afflect's real-life love interest) plays the enigmatic Andrea Rivera. Was she victim or manipulator? Can Bromley hold his own? Helen Hunt plays Bromley's protective and hysterical mother to perfection. The drama is well played out although the plot may seem a little patchy. Good enough for the weekend watch.
One person found this helpful
Report abuse

Paul P.Reviewed in the United States on February 23, 2021
5.0 out of 5 stars
Tye Sheridan Shows his Range
Verified purchase
Fascinating tale about a autistic man who, although restricted, is able to perform the job of a night clerk in a hotel. Throughout the film you are confronted by confounding situations, but you have to continually try to put yourself in the young man’s shoes. Sheridan does a wonderful job in this very difficult role. If you like mysteries, this movie offers a new twist to the genre.
Report abuse
See all reviews
Back to top
Get to Know Us
Make Money with Us
Amazon Payment Products
Let Us Help You
EnglishChoose a language for shopping. United StatesChoose a country/region for shopping.
© 1996-2021, Amazon.com, Inc. or its affiliates