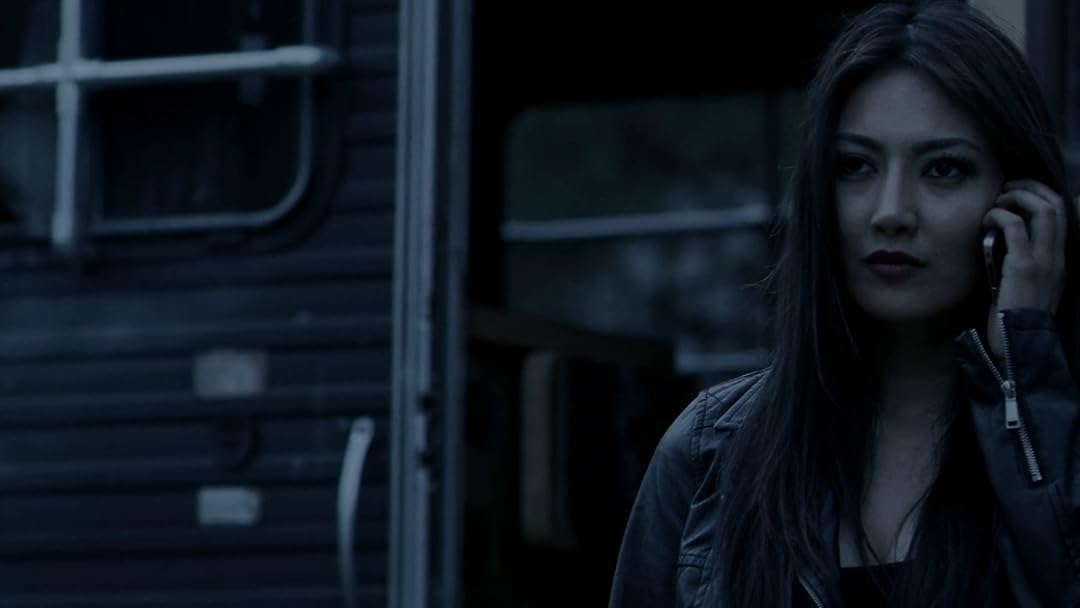 (149)
4.21 h 32 min2016X-Ray18+
The Night Crew centers on a group of hard up bounty hunters who must survive the night in a desert motel against a horde of savage border runners. They soon realize that their fugitive, a mysterious Chinese woman, is much more than she lets on.

John GarganiReviewed in the United States on May 6, 2019
4.0 out of 5 stars
Preposterous, but incredibly FUN!!
Verified purchase
these type of shoot-em-up movies are so over the top, and so impossible, but, if it has the right character actors, you become invested in it, and that is exactly what happens in THE NIGHT CREW.

In this case, you have two veterans of these kind of movies: Luke Goss and Dokeem Woodbine.....they rarely disappoint.

but what really makes this one special are the two female leads: Chasty Ballasteros and Luciana Faulhaber, are HOT HOT HOT! really...no joke, google them right now. And they play their parts to perfection.

In a real unusual turn of events, this movie switches from an action bonanza to the supernatural, and it does so in such reveals, that you shake your head and say "WHA??????"....actually, a clue to this is with another tough guy Danny Trejo from an opening scene, however, I don't want to give anymore away.

this movie is a true guilty pleasure.....

MichelleReviewed in the United States on March 11, 2020
5.0 out of 5 stars
Three of my favorite things, badass women, tough guys and the blood to play with
Verified purchase
Actually, I just wish I could have gone to the after party.

Danny is always hot and man that voice!
This was set for a sequile I think so I will be sorely disappointed if one isn't make. This video should have about four movies in quick succession. Hell, I typed all that our of excitement then realized I should research it. Pft.

So I researched it, no sequile. Sad, so sad. But, I was the first to rate the movie via Google. Shout out to Chasty Ballesteros for making me wish I was thirty years younger and to Jason Mewes, keep it together man, you have a following and it is a good life to live these days. Boot straps young man!

I can't help but want to opine on how the movie felt and read to me. I hate it when reviews tell you the whole story, why bother to watch it after some fool spoils it.

Thanks for the entertainment, I loved it.

I love it when a B movie genre gets bumped up to A with a bit of extra cash. Bravo all!
One person found this helpful

RannonReviewed in the United States on September 19, 2021
2.0 out of 5 stars
Nah man
Verified purchase
So I won't spoil the twist. It was alright, and it wasn't perfectly telegraphed or anything, so it held some value. Enough value for another star, but not a lot more.

Because the rest of movie was pretty bad. Details are a thing a lot of B movies get wrong, or just mess up, or get bogged down with and this one is no exception. They run out of ammunition. Not because they are shooting a whole lot, but because they are wearing plate carriers (bullet proof vests) with ammo pouches but with NO AMMO IN THEM. Space for some 10+ magazines and each of the 4 main good guys has ZERO ammo mags on them. They are on the run from the cartel with a package in tow and they leave all the "gear" in a duffel bag instead of each operator/bounty hunter having the gear they need ON THEM. What kind of team does that? Amateurs do that. People who are on the run without a plan do that. Professionals do not do that.

They bring night vision (well one of them does) but no one thought to bring a helmet to carry it on, so it is discarded as soon as it gets used once.

They have medical supplies, but it's in a blue plastic box that you would buy from a Walmart. They do not each have a medical kit on them (so no bandages, no coagulant, no tourniquets, no disinfectant). These are relatively small bags that fit on your kit/plate carrier and each person in a team carries them even if they are NOT a combat medic. If you get shot, and you have a medical kit on you, the person who knows how to save you can use YOUR KIT to save you. These morons had a box that they immediately dropped once the fighting started and hardly looked at again until the plot moved them out of that situation.

And really, it's the treatment of battlefield injuries that angered me the most. People get shot in this. Unlike in real life, however, several of them simply act like being shot isn't a big deal, and shrug it off, and their teammates LET THEM DO THIS. The one big guy... any good leader would immediately check the wound, clear it, and treat it in whatever way they could. A man or woman losing blood is NOT an effective fighter after a short time, and the way the big guy was losing blood, he would have been dead in minutes not the half hour or more it took to get the job done.

And then they all argue over relationships IN THE MIDDLE OF A BATTLE. While one guy is bleeding to death.

To top that all off, the fact that they stop for food at a diner, while not securing the package, is just utter insanity. She should have been duct taped, zip tied, hog tied, and gagged. She should have been stuck in the trunk out of sight for as long as possible. with one person on duty to make sure she is secure. But she wasn't, because these "professionals" needed the plot to mosey on.

No one in this movie thinks about anything at all. Everyone who dies dies because they are not smart, and the people who survive survive because of a deux machina. Even the part at the end where one guy saves some people; he shoots AT THE PEOPLE HE'S TRYING TO SAVE. He just suppresses the trigger and waves his gun around, which should have gunned down his friends but nope. Everyone miraculously lives and everything is wonderful.

Nah fam. This is a hard pass from me. It's not just nitpicking here; this is just a bad movie.

Melanie CReviewed in the United States on August 17, 2021
4.0 out of 5 stars
DEFINITELY a Better Movie than the Ratings Depict!
Verified purchase
WHAT IS WRONG WITH PEOPLE?! Over at IMDB they've got a 4.1 out of 10 rating on this movie. On Amazon, it's at least fairing somewhat better at 3.5 out of 5...which USUALLY is my cutoff for 'watchable' movies...but I like Luke Goss as an actor, so I went with the movie...and IT WAS SOLID! If you like movies like 'Sicario' or 'S.W.A.T.', but with a Bountyhunter theme deep in a place they shouldn't be, then this is for you! LOTS of action, not over-played (well, one of the gunfights rages beyond the size of their small group...but it's still well played), and without a doubt...the 'end twist' will leave you wishing they had followed-up on their credits promise to 'return with Night Crew II'...if only!
This is entertainment at its best...a great 'evening movie' for the 'action movie craving'...it's a SOLID 4 that does NOT feel like any 'B-movie' made. NO, IT'S NOT CGI...it is acted. Maybe the new generation sees 'no-CGI' as a 'B-movie', but this is not!!! I've seen horrific trash with $100-million budgets get higher ratings that wasn't HALF the movie!

SBC97223Reviewed in the United States on July 19, 2019
3.0 out of 5 stars
Mixed Bag of Tricks here.
Verified purchase
So we have a supernatural shoot 'em up here with corrupt romance and action. That is a lot of movie plots to draw from and such a mixed bag produces mixed results. Danny Trejo can give character to any bad guy so that is a plus. The rest of cast appeared as mixed up as the plot. Normally, I'd give a convoluted plot and this type of action one star. But, in The Night Crew they get enough things right to overcome the bad. It is not a great movie, or the worst movie out there. It tells a story and the good (loosely earned kind of good) guys appear to survive to fight another day all be it at tremendous cost. The fights and gun play are like all to many actions flicks--not very realistic! But there was some real attempts at character development so all that adds up to a very average three star movie in the end. You can do both better and worst in the action genre so give this one a chance for some interesting twists but do not get your hopes up that it is true quality.
2 people found this helpful

Andrew "Big Ugly' HaleReviewed in the United States on September 24, 2020
3.0 out of 5 stars
"Just be happy". Uhm, OK.
Verified purchase
This film was hard to really get into as the acting just didn't seem committed. The bounty hunters were a psuedo-military rag-tag group of misfits with an awkward love triangle. The target bounty was too emotionless Terminator to be taken serious. Danny Trejo was, well, Danny Trejo. Silent assassin fits him well but here he is a cocky mystical kingpin. Jason Newest was probably one of the better actors but that's not a praise.

The production was good and the excitement was there so I'll keep it rated as an average quality for wasting an hour and a half when you got time. But know this: the last ten minutes go to a whole new movie. They should have revealed this twist in the beginning and then created a more gritty story that deals with the kingpin's henchmen in a lot more bada## detail.
One person found this helpful

Kelly O.Reviewed in the United States on September 14, 2021
5.0 out of 5 stars
Fantastic Movie
Verified purchase
Great story, and excellent acting from everyone involved. Bokheem Woodbine is pretty much the best actor in Hollywood, after Danny Trejo, and we get them both in one work of art! Great battle scenes and lots of explosive action, but the story is a little complex ... you have to watch pretty closely to follow. It's a powerful statement on how the power of love can overcome a legion of killers with rocket launchers. I don't think this is a spoiler, but this movie links vampirism to its historical roots in the bible. This may have been based on a true story. I can't wait for the sequels.

380 megaXtremeReviewed in the United States on March 29, 2019
1.0 out of 5 stars
ultra lame movie
Verified purchase
I tried hard to finish it, coming back several times to watch more over the course of days, but i finally gave up. This thing is pathetic, the writing is so bad and a lot of the acting is pathetic also. The actors who play the main characters aren't all bad but the writing for their parts are and if the script is bad there's not much they can do. A lot of the other supporting actors are just cut rate and pretty bad. The scoring is ultra lame, so cliche it's pathetic, this thing just sucks.
2 people found this helpful
See all reviews
Back to top
Get to Know Us
Make Money with Us
Amazon Payment Products
Let Us Help You
EnglishChoose a language for shopping. United StatesChoose a country/region for shopping.
© 1996-2022, Amazon.com, Inc. or its affiliates