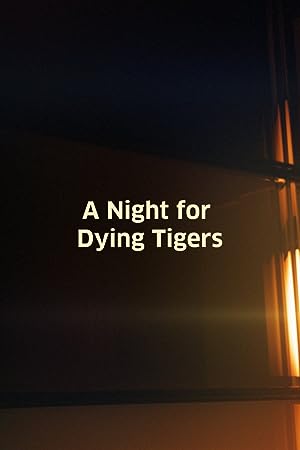 Night for Dying Tigers, A

(61)
5.11 h 36 min201018+
There's no place like home. Thank god. A Night for Dying Tigers is a dark, heartfelt and ultimately revealing portrait of a family on the edge of disintegration.

KReviewed in the United States on January 5, 2017
4.0 out of 5 stars
Solid Film
Verified purchase
I would actually give this 7 out of 10 if I could, but erred on the generous here. This film pulls you in with an intense set of characters and an unknown plot that builds. As the story unfolds, it reveals complicated psyches that may seem disturbed to some, but also seem relatable and refreshingly raw. I found the acting to be excellent, with a few exceptions. However, about an hour in, the movie begins to drag a little (I found myself checking how much time was left). It seems to play the same situations with different details or people: lots of drinking, in various rooms in the house, mental manipulation with contemptuous subtext, and revelations that someone else has slept with, yet again, someone else - to the point that it's a little ridiculous. The plot gears up again toward the end. Ultimately, I came away from this film feeling that at the same time you can admire, detest, forgive, and begrudge, and yet maintain unconditional love.
5 people found this helpful

singerReviewed in the United States on November 28, 2015
5.0 out of 5 stars
Study on family destruction
Verified purchase
I love it. This is a story of a self-destructive family that get's off on their self-destruction. If you a looking for a flick about a dysfunctional family where there are light humorous moments then this is not for you, there is no humor in this family drama. I found the casting perfect as well as the performances. This film is not a study on family dysfunction but family destruction so beware when watching.
4 people found this helpful

prisrobReviewed in the United States on December 30, 2016
4.0 out of 5 stars
Trying To Get Their Stuff Together
Verified purchase
Difficult to know where to begin. This is a family bound for destruction, way beyond dysfunction. The entire family, three sons and an adopted daughter so messed up, you wonder how they will survive. The older son, played by Gil Bellows is off to prison in the morning, he killed a man who was trying to kill his present day mistress. Gil's wife is a photographer of reknown, and why she is still with him is a big question. Middle son wrote a book that won the Booker prize, younger son is a screen writer who has plans to make a film of the book. Adopted daughter may have the most problems, but it is a close race.

And, then, there are the collection of girlfriends and hangers on. This is not a film for someone who is down and out, it is quite depressing with little meaning. Good performances by all, but the underlying message is as screwed up as the characters.

Victoria J. DennisonReviewed in the United States on January 10, 2016
2.0 out of 5 stars
A Night For Dying Tigers
Verified purchase
I could only stand to watch about 20 minutes of it. It was strangely dated for movie that had the release date of 2010. It was more like one of those hideous movie's from the 70's that were trying to be an art film but didn't quite make it. I stopped watching when I noticed the women had to take their shoes off at the door while the men did not. Weird... In the 20 minutes I watched; the dynamics of the personal interactions were extremely slow moving, dull and very uninteresting. I suppose you could just say that the film was both boring and extremely dated.
3 people found this helpful

Josephine DonovanReviewed in the United States on January 15, 2017
3.0 out of 5 stars
Three Stars
Verified purchase
It was good....I would rate it wonderful if I understood all the relationships better.

CLRReviewed in the United States on January 20, 2017
3.0 out of 5 stars
Not really worth the time
Verified purchase
Long and slow but interesting. Not many really likable characters.

MLReviewed in the United States on January 2, 2017
3.0 out of 5 stars
Three Stars
Verified purchase
I was drawn to this show because Jennifer Beals was in it. It was OK.

T GirlReviewed in the United States on October 31, 2015
3.0 out of 5 stars
Just missing, *something*
Verified purchase
I liked the cast, so I persisted. This film needed a tighter script. It was too ambiguous for the first 1/3 of the movie, leaving the viewer guessing where the story was going. There were a lot of complex family dynamics being explored and revealed, making for decent drama - but the directing overly exploited some of the cast's acting talent. Not sure what would have made this better exactly... Just missing, *something*
2 people found this helpful
See all reviews
Back to top
Get to Know Us
Make Money with Us
Amazon Payment Products
Let Us Help You
EnglishChoose a language for shopping. United StatesChoose a country/region for shopping.
© 1996-2022, Amazon.com, Inc. or its affiliates