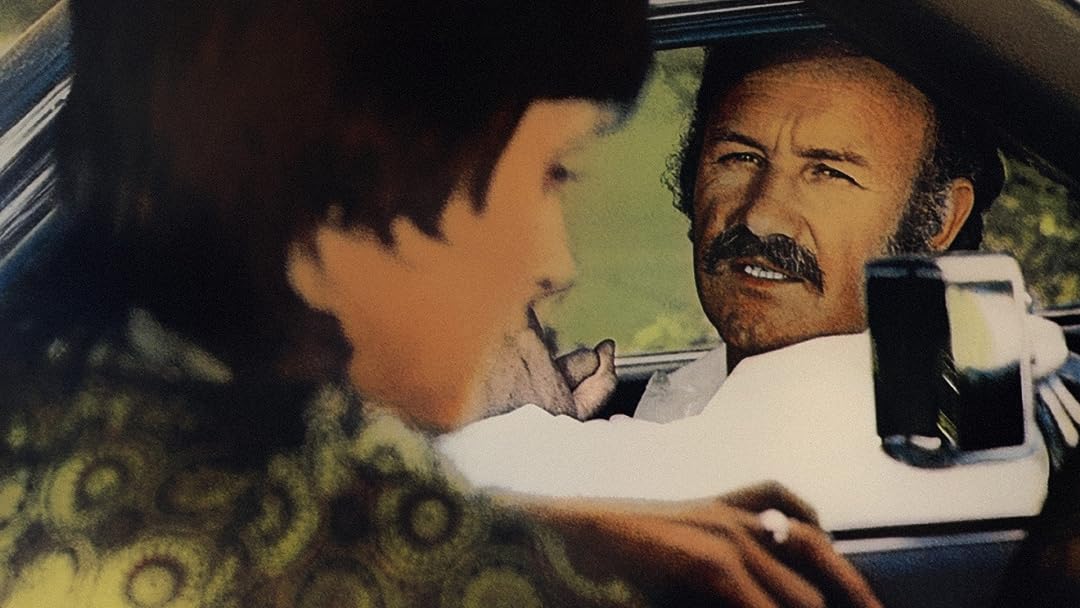 CJReviewed in the United States on August 2, 2017
4.0 out of 5 stars
Solid '70s Grit
Verified purchase
Although not a widely hailed movie, don't underestimate this one. Great rock bands are more than just their hit singles---they also have good album cuts that casual fans have never even heard of. This movie can be described as a solid album cut from a rock band called Gene Hackman. He was squarely in his prime here (he was even quite fit back then, almost to the level of a action hero/romantic lead type, although he didn't have the face for it). He was born to play a perpetually ticked off, pushy, moody, smart aleck on a mission. And it becomes a rather complicated mission. It probably wouldn't have hurt to edit 10-15 minutes from the film, which does meander. But I find the bleak, gritty '70s neo-noir atmosphere an appealing escape (and you will too if you enjoyed Gene in movies like French Connection), so there is really no need to hurry. Just settle in and absorb the story!

Notable appearances by Susan Clark and Jennifer Warren, as well as a scandalously young and beautiful Melanie Griffith in a troubled lolita role. It would be almost unimaginable for a 17 year old actress (who looks even younger) to play that part in a major mainstream movie released today! We've become more conservative over time in many ways. The '70s were before my time, but I have studied the movies, music and pop culture of that era extensively. The naive dream of the '60s hippies had crashed down horrendously and suddenly, and what was left was disillusionment and cynicism, and not surprisingly, a drive to crank out negative and/or shocking movies that pushed the boundaries further. No happy endings. No heroes. And that's fine. Life doesn't always have happy endings.

Ron BlachmanReviewed in the United States on May 2, 2020
4.0 out of 5 stars
Hackman is perfect for Film-Noir where nobody is the good guy and everyone loses
Verified purchase
Ahh 1975. In 1969 or so OPEC started to flex their muscles, by 1975 they'd embargoed us , restricted supplies of oil. Things were tight. What you didn't know was there was also brassiere embargo. Women couldn't find them anywhere. In response, Congress passed legislation requiring that women could only wear tight tee shirts, sheer, embroidered tropical blouses, tight knit shells and, for matronly types, thin silk robes. Costuming this film was no great expense - an outright nipple-fest. It is nice to see Harris Yulin in a supporting role when he was younger. Kind of cool to see Melanie Griffith as a young ingenue - and you do SEE Melanie. This woman's nudity clause is a reverse twist - she would not do a film UNLESS she got naked - often. She's pretty good in her Lolita-styled role. Overall the script is a bit loose but it is a pretty fair example of the noir genre in the 70's.
7 people found this helpful

Films4LifeReviewed in the United States on March 14, 2020
5.0 out of 5 stars
One of the best neo noirs!
Verified purchase
Night Moves is a great 70s neo noir that is classic 1970s! The legendary Gene Hackman commands the screen in what is one of his career defining performances coming right after The French Connection and The Conversation. Night Moves also features some top notch supporting roles such as another legend James Woods and also features a young Melanie Griffith in her debut film. This gorgeous Warner Archives blu ray features an outstanding transfer that really brings out the lush cinematography of the great 70s L.A. and Florida locations and the superb audio brings out Michael Small's wonderful score. If you're a fan of noir and private detective films like I am then Night Moves is essential viewing as the review quote states on the back of the blu ray! It makes for a great Florida noir triple feature with the masterpiece Body Heat and Wild Things too!
5 people found this helpful

John BruneReviewed in the United States on December 4, 2018
2.0 out of 5 stars
Great bluray but only if you like the movie
Verified purchase
From one of my favorite directors. I hadn't seen this film before. I bought it based on my love for the director (Arthur Penn--Bonnie and Clyde, Little Big Man) and based on a review from Bluray.com. It was boring, contrived, poorly directed, very poorly edited with a ho hum finale that was very forced and fake. Seemed like a movie that was saved during the edit. I felt the same way about Chinatown--a film mentioned highly by the reviewers of this film. Underwhelming in every way and not worth seeing a second time. I base all the discs in my library on rewatchability. I rolled the dice and lost on this one. Will be selling it to someone who appreciates it more than I very soon. Warner did a great job restoring it though.
5 people found this helpful

pastoraliaReviewed in the United States on November 19, 2018
2.0 out of 5 stars
Hackman and Penn at their worst.
Verified purchase
I was initially excited when this early Gene Hackman film directed by Arthur Penn showed up on prime streaming but what a disappointment! Hackman seems to be sleep walking through the entire film. This is not a Marlowe-esque PI story as much as its about someone's marriage falling apart in one scene and then a "search for a missing girl" in another scene and then they just switch back and forth with poor edits and sloppy production values. A 15-year old Melanie Griffith might be the only reason to see this. She definitely holds her own with more established actors. Just a waste of an afternoon IMO.
3 people found this helpful

Quiet KnightReviewed in the United States on September 23, 2020
4.0 out of 5 stars
Night Moves Made It To Blu-ray
Verified purchase
Warner Archive released this 1975(though made in 1973) neo-film noir starring Gene Hackman, Susan Clark, James Woods, and a young Melanie Griffith, looking fine in HD, porting over the previous extras from the DVD, though nothing new was added. Still, this is a well acted and written private detective thriller with a most memorable end.
2 people found this helpful

DocReviewed in the United States on May 3, 2020
2.0 out of 5 stars
Meh.
Verified purchase
I had high hopes for this film, as I greatly enjoyed Gene Hackman in 70s classics like French Connection and the Conversation. Night Moves was a let down in comparison. From the opening scene it felt low budget and never really connected....almost like a 70s made-for-tv movie. The first two “interwoven” plots...cheating wife (who he should dump) and finding girl (an exceedingly annoying Melanie Griffith in her first role) were boring. By the time the smuggling plot was added half way through the film, I had lost any remaining interest, and even the fun 70s clothes and cars just couldn’t keep me with it, so I bailed on this one.

Mel OdomReviewed in the United States on March 24, 2008
5.0 out of 5 stars
An Underdog of the 1970s PI Films
Verified purchase
I'm a big fan of private eye movies and television series. I'm glad THE ROCKFORD FILES has finally come out on DVD, but I'm still waiting for MARLOWE, starring James Garner and Bruce Lee.

However, I don't have an excuse for not having already seen Night Moves. It's been out for over thirty years, and I bought the DVD a year ago. I did finally get around to watching it, though, and it was as good as I'd hoped it would be.

The story is pure 1970s, as evidenced by the cars, clothing, and some of the language. But it also tells a timeless story of confusion and betrayal, and the layers of secrets that add to those.

Gene Hackman stars as Harry Moseby, an ex-football player rather than an ex-cop. Moseby has been broken down by family problems and the loss of his career, and seems to be barely hanging onto life by a thread. Only the occasional missing persons case appears to keep him financially afloat and emotionally anchored.

Hackman has always been a personal favorite of mine. He can pull off any kind of role and look good doing it, even if the film is total cheese. He's just a guy I look at and immediately respect. His everyman stance and his charm just oozes from every pore. As Moseby, he was a well-known football hero, and a lot of his friends still see him as a standup guy, but he doesn't let anyone in too close.

Unfortunately, that same inability for closeness is what ultimately undermines his relationship with his wife, Ellen (Susan Clark). When he first gets handed the case of the little runaway rich girl, Moseby isn't too interested. Then he catches his wife cheating on him and tries to lose himself in the investigation.

I liked the way the movie dovetailed back into the movie industry the way some of the old 1940s movies did. Some of the best cinematic detectives have their roots in the twisted and sordid tales that came out of Hollywood. This one has stuntmen and used up actors to season the tale, and it adds more credibility to it.

The Florida footage on the case was extremely well done as well. Director Arthur Penn (LITTLE BIG MAN, BONNIE AND CLYDE) manages the Hollywood and LA scenes well, then zips the viewer down for a peak at what was then Travis McGee's tramping grounds as John D. MacDonald wrote his adventures. I liked the rough and tumble atmosphere of the land, the characters, and the twists and turns the plot took while down there. Jennifer Warren plays femme fatale Paula in a haunting and sexy scene.

Some of the most fun was watching a very young James Woods and Melanie Griffith taking their places on the stage. Woods hasn't changed much, but his presence on the screen is intense these days. He's another one of my favorites. Melanie Griffith, young and hot and nude in several scenes, just burns up the celluloid.

I really enjoyed Hackman's work in this movie. As I said, I own it and intend to watch it again. I'd really advise picking up TWILIGHT, with Paul Newman, Susan Sarandon, James Garner, and Hackman to really round out a double feature private eye/noir night. Hollywood seldom makes films like these any more and it's a shame.


15 people found this helpful
See all reviews
Back to top
Get to Know Us
Make Money with Us
Amazon Payment Products
Let Us Help You
EnglishChoose a language for shopping. United StatesChoose a country/region for shopping.
© 1996-2022, Amazon.com, Inc. or its affiliates