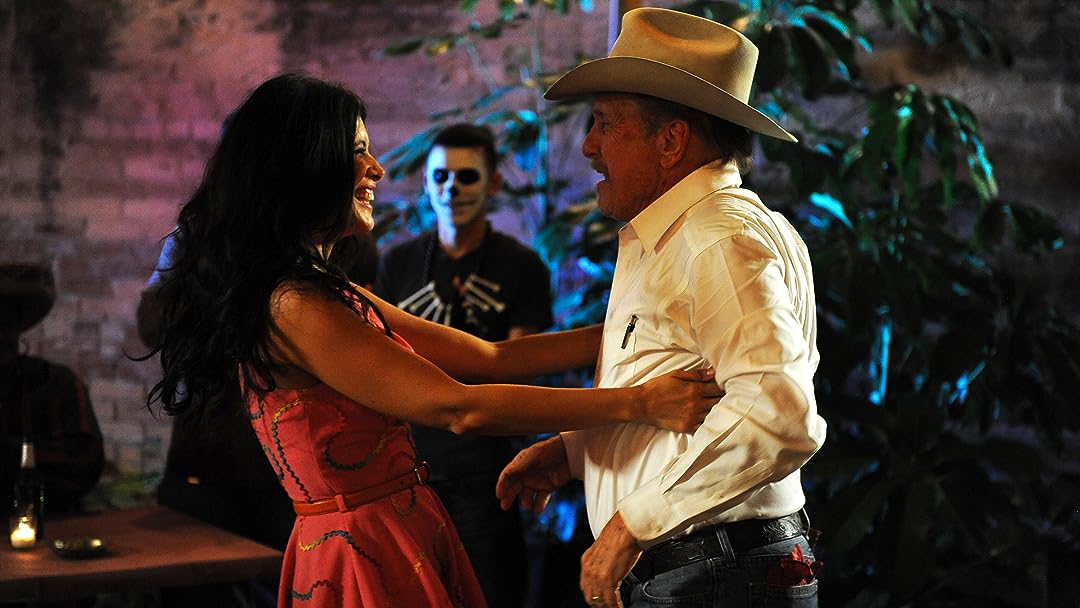 A Night in Old Mexico

(673)
1 h 44 min2014X-Ray16+
Forced to give up his land and his only home, cantankerous Texas rancher Red Bovie isn't about to go quietly to the dismal trailer park that's all he can now afford, and instead goes off with his grandson Gally - son of his long-estranged son Jimmy - for one last wild and woolly adventure during a night in Old Mexico.

Andrew "Big Ugly' HaleReviewed in the United States on September 8, 2020
5.0 out of 5 stars
Old and young. Mexican or American. All family.
Verified purchase
"Mexicans are not afraid of having old people around ..."

Some of my most beloved stories involve older characters and younger characters engaging each other with great lessons at hand. The older, seasoned character battles with their degradation while still muscling up unrivaled power to protect the ones they love or prove they can still swing with the rowdy crowd. The younger folks give the energy and bravado of a wylie tiger on the hunt but give way to the older lessons that only aging and acting on will give.

Kudos to Emilio Aragón Álvarez for a well-rounded and entertaining film. It's a slow simmering of old Mexican spice and Texas grit. Pointless chatter early on comes back in witty fashion later on. Sympathy for murderous hitmen and love for angry old men, the film does a good job of merging Mexican culture and Texas culture while giving a good story about not giving up on our older generations. That sentiment is clear in the animated Coco also. I'd watch more on these ANIOM characters if there was more. Beware some crude language and a couple places where Americans and Mexicans initially call each other some prejudiced names all while becoming friends and family.

E.R. &amp;#34;Doc&amp;#34; Wallace PhDReviewed in the United States on September 30, 2017
4.0 out of 5 stars
A Bag Full Of Trouble.
Verified purchase
Elderly Red Bovie (Robert Duvall) loses his home to the bank due to drought and inability to pay a bank loan. Coincidentally, his grandson Gally, whom he's never met, shows up to say hello. A real estate woman tries to pressure him into living in a trailer park, but he takes off in his 1961 red Cadillac for Mexico: He's got his mind on dancing and women. When he stops for gas, a couple of murderers who have a sack full of drug money ask him for a ride if they pay for the gas. He agrees, and off the four of them go toward Mexico. One of the murderers is rude and pushy, so animosity develops between Red and him. When he asks Red to stop along the road so he can urinate, Red takes off in his car while they are urinating, not realizing there is now $150,000 in the floor of the back seat. When the murderers catch up with Red in Mexico, do they get their money back or do Red and and Gally get lucky? It's worth watching to find out. Four stars.
18 people found this helpful

CecilReviewed in the United States on February 27, 2021
2.0 out of 5 stars
A Disappointment
Verified purchase
After reading the good reviews, I was surprised that this movie was mediocre, bordering downright bad. There is nothing better than Robert Duval acting in a movie with a good plot and script. This movie has Duvall, but neither of the other two. The story lacks flow and rhythm and is patently unbelievable and corny in many respects. The character development is rushed and falls flat. Lastly, seeing a screen legend like Duval acting alongside Jeremy Irvine is cringeworthy. Nothing personal against Irvine, but he is simply not a good actor. It is as though he has never acted before nor had acting lessons. This was disappointing and, as painful as it is for me to pan a Duvall movie, I don't recommend this.
2 people found this helpful

Denny DederickReviewed in the United States on November 28, 2018
5.0 out of 5 stars
Really Enjoyed This Movie
Verified purchase
I see a lot of reviewers saying the plot is unbelievable. Why because nothing like that could possibly ever happen to themselves? The plot is very believable to me because I've lived a life where things just like that happened and not just once. These "movie critics" who think they know all about life from sitting in their living rooms watching movies every day don't know jack sh*t about what's going on in this world, except what Hollywood has shown them. This movie was great because everything happened the way you hoped it would. People act like just because things worked out well it was unrealistic. Well I got news for you, sometimes things do go just exactly that well. It's happened to me and I'm certainly not alone.
7 people found this helpful

Mary IreneReviewed in the United States on June 23, 2018
5.0 out of 5 stars
Heart warming very funny movie with good actors.
Verified purchase
I just loved this movie! Lots of laughs and Robert Duvall was so funny as an old coot who wanted one last fling before he died.
He wasnt ready for the glue factory. And I liked the idea of an old man traveling with a young grandson who had yet to find his
own way in life. The only thing I did not like was that they didnt show how the old man was doing a year after this movie ended
and he parted ways with his grandson. I would like to know how both him, the grandson, and the pretty young girl were doing
in their happy afterlife. And did he manage to buy a home or a small ranch in Mexico or find a good apt there and friends?
7 people found this helpful

Ron BakerReviewed in the United States on November 9, 2017
4.0 out of 5 stars
No Country for Old Men
Verified purchase
A tale of a old man at the end of his money and the end of his rope who will not go quietly into the night. He ends up in Old Mexico for a fling and stumbles into cash, killers and a beauty. Well acted and entertaining. Duvall is crusty, cantankerous and hell bent on not spending his last years being spoon fed oatmeal in a nursing home. His grandson from New York tags along and becomes a man. Recommended.
13 people found this helpful

PawPawRonReviewed in the United States on February 9, 2018
3.0 out of 5 stars
Robert Duvall Gives A Great Performance In A Film That Is A Bit Disjointed And Kind Of DIfficult To Believe At Some Points
Verified purchase
Worth watching for free via your Amazon Prime subscription but not sure I would recommend paying to rent it.

Robert Duvall gives a great performance, as always. However the plot is a bit disjointed and not too believable but then it is fiction so I guess you are supposed to suspend your logical thought processes when watching a fictional story play out.
4 people found this helpful
See all reviews
Back to top
Get to Know Us
Make Money with Us
Amazon Payment Products
Let Us Help You
EnglishChoose a language for shopping. United StatesChoose a country/region for shopping.
© 1996-2022, Amazon.com, Inc. or its affiliates