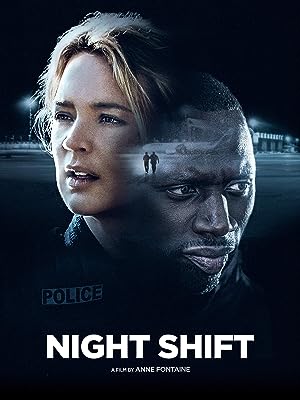 (27)5.31 h 38 min2020PG-13
Three officers are tasked with escorting an illegal immigrant to Charles de Gaulle airport, where he will be forced onto a plane and sent back to his homeland. But when they find out about the truth they have to do a difficult choice.

Joel D. WeberReviewed in the United States on April 26, 2021
4.0 out of 5 stars
A French Exposer
Verified purchase
Many of the reviews appear to be for a totally different American movie, my review is of this French movie.

It may be difficult to make sense of such a movie if you are not French, or have not spent considerable time there. The characters are all very French, their thoughts, their way of talking - their seeming nonchalance about certain aspects of life.

Really, this is a slice of daily life in 3 Police officers, each with their own personal lives, their mental landscapes. The soundtrack and overall mood is tense, like a slow burn. You do begin to feel invested in the characters and even wish them some hope. The climax arrives late in the movie and is beautifully arranged around some Glen Gould piano music. This movie is for the pensive.

t goreyReviewed in the United States on August 20, 2021
5.0 out of 5 stars
So good we watched it twice and started taking French
Verified purchase
This film is reviewed intelligently in Variety and other publications. The political part of the story will stay in your mind forever. The romantic relationship between the wonderful solid Virginie Efira and Omar Sy is slightly enigmatic at the end, and so satisfying.
We watched Call My Agent (French series) and were delighted to see her as her successful actor self. Amazon Prime was the source for so many "fantastique" French tv series and films that we wound up in French language class.

Amazon CustomerReviewed in the United States on October 5, 2021
1.0 out of 5 stars
Movie made no sense!!
Verified purchase
What a waste of time this movie is poorly written and the so called plot was just plain STUPID!

J MaloneReviewed in the United States on March 4, 2021
1.0 out of 5 stars
Not in English
Verified purchase
If you can’t speak French don’t buy this movie

james nelsonReviewed in the United States on June 29, 2016
4.0 out of 5 stars
Four Stars
Verified purchase
Great effort by this crew. Well worth the time and resources.
One person found this helpful

WuchakReviewed in the United States on March 29, 2017
4.0 out of 5 stars
Ron Howard dramedy with Michael Keaton, Henry Winkler & Shelley Long
Released in 1982, “Night Shift” stars Henry Winkler as a morgue attendant newly assigned to the graveyard shift in the Big Apple where he meets an energetic but dubious new employee (Michael Keaton) who talks him into running a prostitution ring at the morgue. Shelley Long plays one of the ladies of the night while Gina Hecht appears as the fiancé of Winkler’s character.

Although director Ron Howard had previously directed 1977’s low budget “Grand Theft Auto” and a few TV movies, “Night Shift” was his big theatrical break. It was also Keaton’s film debut after spending 6 years on TV. Speaking of whom, Keaton’s character comes off seriously annoying, but he slows down after a bit and you get used to him. Winkler was at the height of his popularity after six years on Happy Days with a few more to go, but he could never equal his television success in cinema (I've only seen him in three movies, this, 1977's "Heroes" and 1996' "Scream"). In any case, both work as quality protagonists who happen to be polar opposites.

Long co-starred in this movie right before she shot to television success with Cheers for the next five years (when she chose to leave the show). Shelley never did much for me, although she’s certainly likable, but WATCH OUT for her mind-blowing kitchen scene where she’s just stunning.

The movie’s not great but it’s consistently amusing with 2-3 laugh-out-loud sequences. The topic of prostitution is disturbing, even gross; it’s hard to fathom how a woman could fall into such a horrible pit, but the movie stresses the humanity of the prostitutes and possible redemption rooted in love. And love conquers all.

GRADE: Borderline B/B- (6.5/10)
One person found this helpful
See all reviews
Back to top
Get to Know Us
Make Money with Us
Amazon Payment Products
Let Us Help You
EnglishChoose a language for shopping. United StatesChoose a country/region for shopping.
© 1996-2021, Amazon.com, Inc. or its affiliates