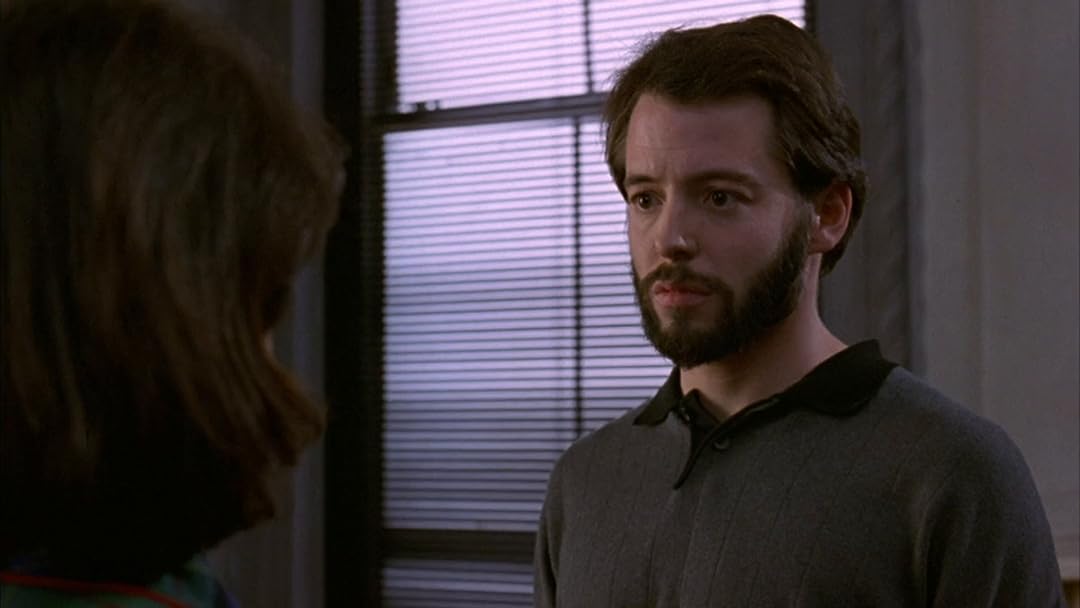 The Night We Never Met

(133)
6.01 h 38 min1993R
Three roommates time-sharing an apartment in Greenwich Village never meet each other until they become involved in a love triangle outside of the home.

Cindy ClaussenReviewed in the United States on March 19, 2012
5.0 out of 5 stars
Finally on DVD!
Verified purchase
I can't believe this is finally on DVD. I remember seeing this on HBO many times, and then forgot about it. Then, trying to find it recently, came to find it was not readily available on DVD. I resorted to buying a used VHS copy which I could not even watch for some time, until I took a trip back to my parents house, where they still have a combo DVD/VHS player.

There are so many memorable characters here:

-The fiance of Justine Bateman's character, and his band of slob friends

-Garry Shandling as the dental patient

Broderick and Sciorra are the cute couple that are meant to get together and take an indirect route before they meet. They are the straight characters, and the supporting cast adds the humor.

Anyway it is a "Chick Flick" comedy that a guy can like. Yes it is a light, but very entertaining movie about how the lives of three "opposites" intersect; Sam the cultured, pseudo-artsy, wannabee Chef, Ellen the disillusioned wife looking for her own space and Brian the Stockbroker party animal. Will the lives of these three people remain separate or will circumstances allow them to meet, even though they are never at the apartment on the same days? This is a nice film with a clever story and script. Only in the Big Apple, I suppose, would you find folks willing to rent a place for only two nights a week. The cast is terrific, with Broderick, especially, giving a very funny and touching performance. As for the costumes, sets and production values, they are great, resulting in a movie that looks mighty nice. If you are a romantic comedy fan, you can't miss this one! Its fresh plot elements and well-drawn characters make it a welcome find in the world of light-hearted love stories. Yet, even if you are not a regular romcom viewer, the film still has some funny situations and universal themes that make it a diverting watch for most anyone.
One person found this helpful

Wanda S. CliftonReviewed in the United States on January 31, 2022
5.0 out of 5 stars
A RomCom with Mathew Broderick
Verified purchase
I had seen this film many years ago. I enjoyed it then and now even though the stereotypes are a little distracting.

glory beReviewed in the United States on March 14, 2012
5.0 out of 5 stars
Sam is the man!
Verified purchase
I loved this perfectly cast, charming flick. This is the New York scene for the single Sam (Matthew Broderick) who is looking for someone who will care about him. He finds an apartment that he can have two nights a week where he can be alone as the apartment he sub-lets is virtually full of people. He is not looking for anything long-termed as he believes he can't handle that since his last relationship has failed. But then there is Ellen (Annabella Sciorra) who shares that apartment another two days a week. Sam cooks, Ellen Paints. They share notes and finally when you might think they will never meet because of various circumstances, they do. It ends as you would hope, happily.
2 people found this helpful

Laurile PetersonReviewed in the United States on January 12, 2021
5.0 out of 5 stars
Watch this movie and forget about the pandemic!
Verified purchase
I love this movie! It seems to be a sleeper and honestly I don't know why. The acting is perfect. A hilarious story and even though this movie is old it is timeless. We could all use a good laugh during this pandemic. This movie will pull you out of your head.

Mary B. ColemanReviewed in the United States on August 25, 2013
5.0 out of 5 stars
True love will always find a way
Verified purchase
This movie makes you want to help these two people find each other. . All you romantics will be captivated by the story line, the couple and the cruel twist of fate that keeps them apart. I bet you'll be wanting to help them too. "Matthew Broderick"(Sam) a gourmet chef,needing some peace and quiet, and "Annabella Sciorra" (Ellen) a dental hygienist, wanting a place where she can paint, each sublease an apartment for (2) days a week . The actual tenant of the apartment who is soon to be married and doesn't want to give the apartment up, as he and his frat buddies meet there a few nights a week themselves. Decided to sublease the apartment for the remaining days in the week in order to keep it. I don't want to spoil things for anyone by giving away too much, but I hope I've said just enough to peek your interest. Rent or buy this movie, you 'll be glad you did!
6 people found this helpful

ConnorReviewed in the United States on October 2, 2017
5.0 out of 5 stars
What’s not to love?!
Verified purchase
I love this movie! It’s been one of my faves since the 90s. Matthew Broderick is always great to watch and Annabelle Sciorra is fantastic. One of my regular go to movies when I just want a cute funny lighthearted good time.
One person found this helpful