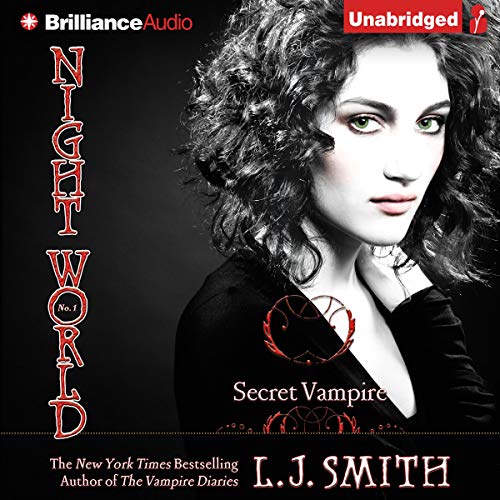 L. J. Smith (Author), Ellen Grafton (Narrator), Brilliance Audio (Publisher) & 0 more
4.4 out of 5 stars 63 ratings
See all formats and editions
Sorry, there was a problem loading this page. Try again.
The series takes place in a world similar to our own but one where vampires, witches, werewolves and shape-shifters live among humans without their knowledge. These supernatural races make up a secret society known as the Night World, which enforces two fundamental laws to prevent discovery: (1) Never allow humans to gain knowledge of the Night World's existence and (2) Never fall in love with one of them.

In Secret Vampire, Poppy thought the summer would last forever. Then she was diagnosed with terminal cancer. Now Poppy's only hope for survival is James, her friend and secret love. A vampire in the Night World, James can make Poppy immortal. But first they both must risk everything to go against the laws of Night World.
Read more
©2009 L.J. Smith (P)2009 Brilliance Audio, Inc.
Previous page
Next page

Leej28
3.0 out of 5 stars Light, easy read
Reviewed in the United States 🇺🇸 on December 12, 2008
Verified Purchase
I'm a big fan of vampire books, but could never get into the twilight series. This one was a quick read. Most importantly - the heroine didn't annoy me within the first few chapters. Worth a try.
Read more
2 people found this helpful
Helpful
Report abuse

Carol E. White
5.0 out of 5 stars Secret Vampire (Night World)
Reviewed in the United States 🇺🇸 on February 25, 2010
Verified Purchase
Very good book, if your into vampire books or movies you would love this book, there is also a series of these books, whick are great.

I first discovered the Night World series when I was about 10 or 11; I can't remember which. I devoured them then; I've always been fascinated with the supernatural, vampires and werewolves and witches oh my. Now, rereading the series a decade later, I'm happy to find that my nostalgia for the books is valid, as I'm enjoying them this second go around as much as I did the first time.

"Secret Vampire" tells the tale of Poppy, a 16 year old who starts her summer vacation in a rather dismal way: with a diagnosis of incurable pancreatic cancer. A summer that promised to be full of music, hanging out with friends, and just generally having a good time will turn into 3 months or less of pain and agony...but luckily for Poppy, her best
friend James has a secret.

James is a vampire, part of the Night World. The Night World is a secret society of all sorts of supernatural creatures and they have two rules: 1) Never tell humans about the Night World, and 2) Never fall in love with a human. To break these rules is to risk death; but James is more than willing to risk his life, especially after he
discovers Poppy is his soulmate.

All Night World books carry a common theme: the protagonist is always a female teenager, always someone a bit different from all those around her. In each book the protagonist finds her soulmate.

I remember when I was much younger and reading these books. I wanted to *be* the protagonist. I wanted to be a part of the Night World - and who wouldn't want to be? Smith has a gift for writing fiction that speaks to the reader, and makes the reader identify with the main characters. Poppy and James connect in a mental way when he is transforming her into a vampire, a way that makes words seem bulky and useless for real communication. Even though I know life isn't like that, it's still magical to see it done nicely in fiction. And still makes me wish it were possible.

The Night World series has recently been republished in a collection of omnibuses, which makes it a great pickup. The next installment in the series, which I have been waiting for for over a decade, will be published in 2010, which makes this the perfect time to leap into Smith's secret society. "Secret Vampire" is an excellent kickoff to the series, and introduces readers to some of the particulars of the Night World, as well as to two great characters.

My only issues with this book are that it's a little dated, due to being first published in 1996. You don't dial in to the Internet anymore, etc.; but that's just me nitpicking. Also it's a somewhat quick read; I finished the entire book in about 90 minutes or less. But that also makes it a nice diversion that won't take you a week to enjoy.

The mystery element of the book is pretty interesting. The three sisters are intriguing, and Ash, who was introduced in the first book, does a turnabout and becomes a guy any girl would want to marry.

Among some of my favorites. Outstanding literary work. The characters are well developed, interesting. The liked characters are likable and the hated are unlikable. The writing is captivating enough to keep you interested until the end and leave you wanting more. It has a fairly original or uniquely well-developed plot. The pretense and romance was well balanced and done with properly distributed amounts of hints, behaviors and chemistry. Not so much predictable if at all. Overall, loved it, I recommend reading!!
Read more
Helpful
Report abuse

Caroline
5.0 out of 5 stars 20 years later and still as enjoyable as the day it was released
Reviewed in the United States 🇺🇸 on May 17, 2017
Its been roughly 20 years since I first discovered L. J. Smith and her Night World series. (Did I just age myself???) Unlike another favorite series from those days, which I re-read in recent years and then questioned my middle grade taste in books, this series is still as amazing as the day I read it.

Smith doesn't waste time with describing every little nuance that her readers honestly aren't going to care about, but within 2 pages I had a solid sense of who the heroine, Poppy, was as a person and how she felt about James, the hero of our story.

I was always a huge fan of the whole Soulmate trope and this series executes it perfectly. For me, there needs to be some kind of supernatural reason for Soulmates to exist, and in a world of vampires, witches, and shifters, it’s very easy to buy into that reasoning. Add in forbidden love and what teen girl could resist! Certainly not this one, even now that I've said goodbye to my teen years ages ago.

This is a short read, but it is utterly satisfying. There's the star-crossed lovers, the villain, and vampires and witches galore! I seriously can’t wait to dive into the rest of these books. Who knows, maybe by the time I re-read the last of them, there will finally be a new release date set for the final book in the series. It's only 17 years past due.

So should you read this one? YES. This was the book for the generation before Twilight. (And the author also created The Vampire Diaries - though the TV series took great liberties with the story. For the better IMO. But that's a whole other book review!) So, what are you waiting for? Go sink your fangs into this amazing series!
Read more
One person found this helpful
Helpful
Report abuse
See all reviews