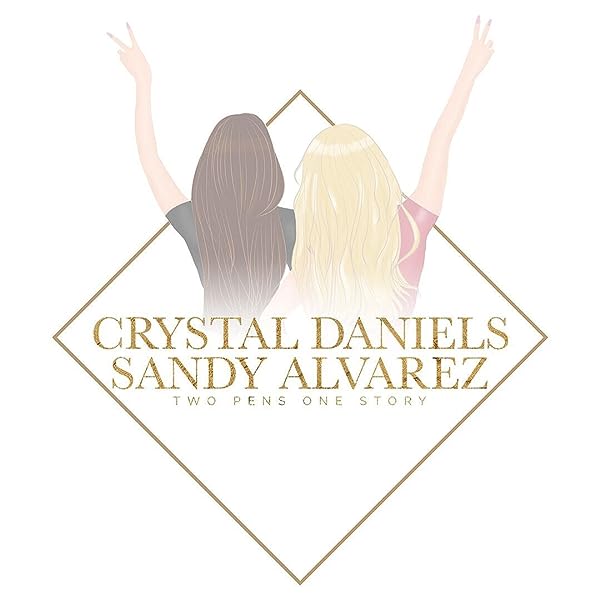 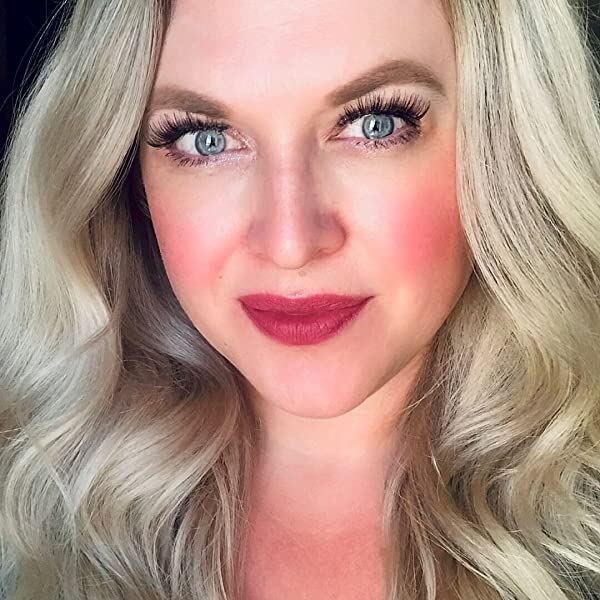 by Crystal Daniels (Author), Sandy Alvarez (Author)
4.6 out of 5 stars 858 ratings
Part of: Volkov Empire (2 books)
See all formats and editions
Sorry, there was a problem loading this page. Try again.

Nikolai Volkov has been groomed to one day rule his father's empire. Growing up in a crime family, you don't have many options. You live and die by the Volkov name.

After connecting with his half-brother in the states, Nikolai chooses to step away from family obligations, to find what he feels has been lacking his whole life. What he wasn't expecting was for a curvy young woman with amber eyes to become the missing piece to his existence.

When enemies threaten the life of Leah Winters, a shy and broken woman he has sworn to protect, Nikolai's Volkov roots rise to the surface.

There's only one outcome for those who stand between Nikolai and the woman he loves.

Living each day in fear is no way to live, but it's the only life Leah Winters has ever known.

Family is supposed to be your protector, not the monsters haunting your dreams at night.

Until one day, she decides to put her trust and life into the hands of The Kings of Retribution, where she crosses paths with Nikolai Volkov.

A year passes while hiding from her past. During this time, Nikolai and Leah's relationship suddenly shifts, turning into something more.

Beaten down by cruel words and low self-esteem, Leah never thought a powerful, handsome man like Nikolai, could ever love her, until-

His words gave her hope.

His touch gave her life.

His kiss promised her the world.

Jenny 💕
5.0 out of 5 stars Enjoyed
Reviewed in the United States 🇺🇸 on November 24, 2022
Verified Purchase
This book was amazing to read . I had a blast reading Logan's story to Jake's to the rest of the MC club and just wow with Dimitri's story but here I am wondering is there a story for Victor and his brother Serge ? If their is I need to find them they deserve a HEA as well or should I say the best possible way they can since their lives are a roller coaster ....
Read more
Helpful
Report abuse

YVETTE RIVERA
5.0 out of 5 stars LOVE
Reviewed in the United States 🇺🇸 on December 2, 2022
Verified Purchase
I LOVE THIS BOOK. Now I want Victor and Sasha to get their own books. This was a great series. It must continue.
Read more
Helpful
Report abuse

McIn
4.0 out of 5 stars Is it Real?
Reviewed in the United States 🇺🇸 on September 7, 2022
Verified Purchase
Nikolai and Leah's story was good. He is even stronger than his father. Making a life in Montana for himself while also helping his father with their empire in Russia. This mafia prince does what he needs to do. He has had his eye on Leah for a year now. He is done waiting. Leah is a woman who has a heartbreaking story. Her friends have taken her under their wing of protection, but she knows the monster will follow. She knows Nikolai is way out of her league but she can fantasize.

The story was good, but this is the fist time I have found grammatical errors in these stories.
Read more
Helpful
Report abuse

HENDRIX FAN 4 EVER
4.0 out of 5 stars LOVED IT!
Reviewed in the United States 🇺🇸 on September 15, 2022
Verified Purchase
I think I'm reading a couple of these books in the series out of order🤔 but they are so good it doesn't even matter😍 I should slow down because I get disappointed when the series is over, but that's okay because these authors are so talented I can be reading forever and not get enough!
Read more
Helpful
Report abuse

Tpagirl Loves Romance
4.0 out of 5 stars Another great addition to the series!
Reviewed in the United States 🇺🇸 on July 8, 2020
Verified Purchase
Nikolai was the second book in the Volkov Empire series by Sandy Alvarez and Crystal Daniels. The series was a spinoff from the Kings of Retribution MC and closely aligned with the series.

Nikolai Volkov was the son to Dimitri (book one) and half brother to Logan (book one, King’s of Retribution MC). He was strong, alpha, loyal, fierce and protective.The moment he laid eyes on Leah he knew, but he had to bide his time for the perfect moment.

Leah Winters was the friend and roommate to Alba and Sam (books two and six in the King’s of Retribution MC series). We learned she was running from an abusive family but the MC and the Volkov’s were keeping her safe. She was quiet and cautious but loyal to her friends.

To tell Nikolai and Leah’s story, the authors had to back track a few years to when they first met. The first part of the storyline coincided with multiple books within the King’s of Retribution series and then picked up with Dimitri’s story, book one within this series. The last quarter of the book then brought us to the current series and beyond. Kudos to the authors for their accuracy when retelling stories. They filled in gaps but remained consistent with facts and details already shared.

As a whole, I loved both Nikolai and Leah. I was glued to the book, not wanting to put it down until the end. It was well written (minus some editing errors) and well developed. With that said, I felt the end (of the conflict) was rushed and I wanted slightly more. It was a huge build up and then the conflict just ended abruptly. No spoilers so no elaboration, but I craved more. As to the relationship build up, it was spot on and a perfect ending.

As to the series, I’d love to see the series continue. We have Sasha, Victor and possibly Maxim remaining. Sasha and Victor could even be a combined book - oh to think of the possibilities! Either way, I love the authors and can’t wait to see what’s next.
Read more
2 people found this helpful
Helpful
Report abuse

Vanessa Badillo
5.0 out of 5 stars a most read!!!!
Reviewed in the United States 🇺🇸 on August 21, 2022
Verified Purchase
Such a great book. I love Nikolai and Leah story. Both are Perfect for each other. Leah is the shy , nerdy one and Nikolai is the so to be head i on f the Russian mafia. Nikolai shows Leah that she perfect the way she is.
Read more
Helpful
Report abuse

Stephanie Bourne
5.0 out of 5 stars Book I been waiting for
Reviewed in the United States 🇺🇸 on August 16, 2022
Verified Purchase
I could not put this book down!!! I fell in love with these two in other books!! So glad their love story did not disappoint!!! The life this poor girl had to go through and to find love in Minolta make my heart melt!!! Hands down a must read book!!
Read more
One person found this helpful
Helpful
Report abuse

Ngoc Nguyen
3.0 out of 5 stars good but fall short
Reviewed in the United States 🇺🇸 on August 4, 2022
Verified Purchase
Overall the book was good, though in some part it was a little lagging for my liking so I kinda skim through it pretty fast. Personally I felt like there was a lot of holes in the plots and a lot of missing information in some part. I also felt like that author would do these huge timeline jump that makes me go “huh? what? when that happened” or she would exclude information on certain events. I had high hopes for this book and it kinda fall short.
Read more
Helpful
Report abuse
See all reviews

Tina Thompson
2.0 out of 5 stars I’m so confused! Baddies everywhere and I couldn’t keep up!
Reviewed in the United Kingdom 🇬🇧 on August 31, 2022
Verified Purchase
I was really enjoying the first half of this book. Even though they didn’t meet until a quarter of the way through, or get together until over halfway through. Then it all became crazy! There’s a big chunk of the book about Glory and Dimitri, why couldn’t that have been in their book??? There’s enemies everywhere and I couldn’t keep up with all the different people and their names! Also because this book starts a year and a half before they get together, there’s a lot of rehashing everyone’s love life and issues.

It really doesn’t help the book, how the author describes Leah as fat, with frizzy hair and glasses! I actually got really angry at one point with the author, as EVERYONE CALLS HER FAT, OR A COW!!! 😡😡😡😡 Yes I know that Nikolai loves her as she is and thinks she’s beautiful, but the author obviously doesn’t think she is! As men and women attack her for her size. If she was trying to convey that beauty isn’t one size, and overweight women can be beautiful, she didn’t succeed!!!

I really wouldn’t recommend this book at all.
Read more
Report abuse

MD
4.0 out of 5 stars Good to read his story..
Reviewed in the United Kingdom 🇬🇧 on October 22, 2022
Verified Purchase
Think they both were perfect for each other but I just didn't like how Leah's memory of the girl wasn't concluded...
Read more
Report abuse

Hanbarn
3.0 out of 5 stars Good but
Reviewed in the United Kingdom 🇬🇧 on August 1, 2021
Verified Purchase
I had such high hopes for Nikolai’s book and whilst it was good feel that he was unexpectedly volatile and unpredictable. Can’t say I was a great fan of Leah and her character. Felt short changed by this book.
Read more
Report abuse

joe kindle unlimited.
5.0 out of 5 stars Mafia/Bikers
Reviewed in the United Kingdom 🇬🇧 on November 22, 2021
Verified Purchase
Absolutely loved every second, well written, could not put it down, I am going to read the stories of the other characters in the book x
Read more
Report abuse

Michelle Grant
5.0 out of 5 stars Amazing
Reviewed in the United Kingdom 🇬🇧 on June 17, 2020
Verified Purchase
This book is brilliant !! Fast paced and exciting i love the characters from the first book. Please read you will love it.
Read more
Report abuse
See all reviews