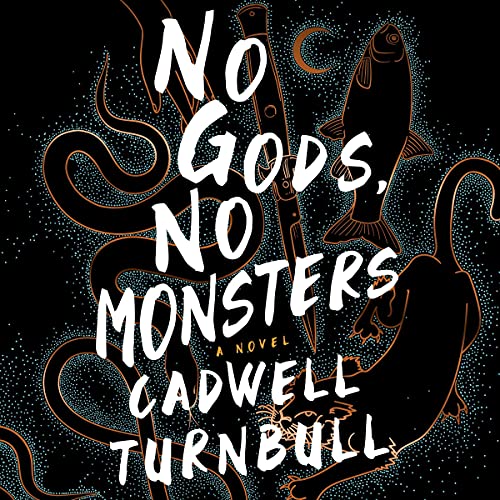 No Gods, No Monsters: A Novel (The Convergence Saga, Book 1)

One October morning, Laina gets the news that her brother has been shot and killed by Boston cops. But what looks like a case of police brutality soon reveals something much stranger. Monsters are real. And they want everyone to know it.

As creatures from myth and legend come out of the shadows, seeking safety through visibility, their emergence sets off a chain of seemingly unrelated events. Members of a local werewolf pack are threatened into silence. A professor follows a missing friend’s trail of bread crumbs to a mysterious secret society. And a young boy with unique abilities seeks refuge in a pro-monster organization with secrets of its own. Meanwhile, more people start disappearing, suicides and hate crimes increase, and protests erupt globally, both for and against the monsters.

At the center is a mystery no one thinks to ask: Why now? What has frightened the monsters out of the dark?

The world will soon find out.

Amazon Customer
5.0 out of 5 stars A beautiful masterpiece!!
Reviewed in the United States on September 13, 2021
This was one of the most wild and beautiful books I've read this year.
Images in this review

Heather
4.0 out of 5 stars Multiple POV
Reviewed in the United States 🇺🇸 on November 2, 2022
Verified Purchase
I read this book and listened to it on Audible, sometimes reading along as I listened. I did this in an attempt to better understand the narrative.
The story changes from various character pov and what appears from various references in time. This can make for a confusing read and one must pay attention as they go along. There were several times I would have to go back a few pages and reread so that I could get a better grasp on the events as they unfolded. I plan to reread this book at a later date and then follow up with the second book in the trilogy.
No Gods, No Monsters portrays not just 'monsters' but those human traits that can be barbaric. It incorporate minorities in the story line and offers a voice for them. I do recommend; however, I suggest the reader understand before hand that it may be difficult to follow if they are not completely tuned in to the book.

ronald opper
5.0 out of 5 stars No Gods, No Monsters Is an Important Book.
Reviewed in the United States 🇺🇸 on November 3, 2021
Verified Purchase
For me, trying on a new author is an important decision, akin to going on-line to buy a new pillow. I know there is some risk in doing this and I know there will be some work in adjusting. With the pillow, it is going to be very close to my head for a long time. With the author, they are going to become part of my mindscape- forever! If it turns out to be a great fit I do my little ego-shuffle , then I move on. The new author and the new pillow will be great gifts to myself, both of which will keep on giving.

I feel great about my decision to give Cadwell Turnbull a try with his first book, The Lesson. I prefer my fiction to have interesting and believable characters, for there to be a fair bit of tension or mystery in the storyline, and for the writing to be thought-provoking. I believe a good novel is one that should linger in my mind for days after it has been completed. I found Turnbull's new book, No Gods, No Monsters to be an excellent read and deeply affective. In both of his books, Turnbull asks- what happens to our taken-for-granted reality, our worldview, when suddenly threatened by fundamental anomalies imposed by external forces. In No Gods, he addresses this question from the perspective of multiple characters. For some, the new anomalies are viewed as distant "what ifs", third person experiences, attributable to the fake media culture. For others, these anomalies are everyday, here and now facticities. Unlike other writers, Turnbull has no interest in imposing the political superstructure or state actors into the mix. It is just you and the paradigm-shifter (or make that shapeshifter).

We like our monsters under the bed or on the big screen, insignificant figments of our imagination. And we want our gods to be at a distance of at least the other side of the galaxy, or so. No Gods, No Monsters is not an easy read, but it is an excellent one! And I am sure my extra work on this one will pay big dividends on Book Two and Book Three! I suggest you give it a try!
Read more
12 people found this helpful
Helpful
Report abuse

MistressViolet
3.0 out of 5 stars Very Intellectual
Reviewed in the United States 🇺🇸 on September 3, 2022
Verified Purchase
Interesting book. I kind of have mixed feelings about it.

The plot... There is a lot to dissect there: lots of analogies, lots of characters, lots of disparate scenes. Honestly, it led to a hefty amount of confusion. I would have benefited from taking notes about the characters to keep things clear.

This book is definitely intellectual, and I can easily see it as assigned reading in college. I am long since out of college though. Nowadays I prefer to read for pleasure, rather than to have to dissect a book in order to understand it.
Read more
3 people found this helpful
Helpful
Report abuse

Elisha
4.0 out of 5 stars I didn't understand it but I enjoyed reading it.
Reviewed in the United States 🇺🇸 on January 16, 2022
Verified Purchase
From moment to moment I enjoyed reading this novel. I may not have understood it but I liked it. I've read "Finnegans Wake.' I didn't understand it either but I still enjoyed reading it.
By the by, in this book I truly enjoyed the section called, 'The Emergent Systems of Bees.' I've read people's reviews. They write: "No Gods, No Monsters" is about certain things, important things. Maybe so. But I think I read it more simply. It was about people. Some of them were monsters—people being people. They were worried about their parents in Texas. That's what I read and it's what I liked. I must admit I loved Dragon. By that I mean I was engaged most by Dragon. I look forward to the next book.
Read more
2 people found this helpful
Helpful
Report abuse

Amazon Customer
3.0 out of 5 stars Too fractured, too many characters, no focus.
Reviewed in the United States 🇺🇸 on January 7, 2022
Verified Purchase
The bones of this story ark are great, but there are so many characters right out of the gate, you can tell it divides the writers attention too much. What your left with as a reader are too many characters to keep up with, too many timelines, and too many alternate worlds with alternate versions of the character. There is a frequent switch between the narrator and the characters voice that they bleed together causing you to have to reread many parts in order to understand what’s going on. The writer cuts between different scenes and characters so quickly and so frequently that when you combine this with the sheer volume of characters that are introduced all at once, you end up with a fractured mess that feels like it’s just snapshot scenes from a more complete story somewhere. The writer has tried to put too much into the first book instead of introducing characters at a moderate pace. The story lacks world building fundamentals which would have given it a much more cohesive feel. Loved the concept, but the way it’s written makes a mess out of it.
Read more
5 people found this helpful
Helpful
Report abuse

Sailor
2.0 out of 5 stars this is not a review of the contents of the book, only the physical book itself
Reviewed in the United States 🇺🇸 on October 3, 2022
Verified Purchase
reading this book is difficult. the pages are thicker than normal pages and the book itself is really hard to open. it’s super heavy for only being 300ish pages. i had to open it up page by page to make it so i didn’t have to crack the spine but i could actually read it. weird stuff. you’d think that thicker pages would make reading easier but that is not the case.
Read more
Helpful
Report abuse
See all reviews

Tina Hewitt
4.0 out of 5 stars Complex, Immersive, So Good
Reviewed in Canada 🇨🇦 on December 4, 2022
Verified Purchase
Turnbull knows how to tell a damn good story.

Turnbull is a smooth writer. Whatever tale he is telling just flows so easily from page to page, even when the subject matter is heavy. He ensures that his readers will have an easy time of it, while remaining interested and engaged.

He did it with The Lesson and he has brought this same style to No Gods, No Monsters. As he builds the reveal that monsters are among us, Turnbull is also raising questions around community and family: how they grow and change, what brings them together, what drives them apart, and how the shadowy areas overlap.

The story of No Gods, No Monsters is one of those stories that has moving parts which requires attention and which rewards a reader that sticks it out. With storylines that move forwards and backwards through time and place, expanding the cast of characters, introducing new magics and monsters, and then looping everyone together in some way was just a great reading experience.

I love a book that keeps me puzzled here, clues me in there, and that has heart. Because at the heart of this story is family and finding a place to be safe and to belong. Isn't that what we all want?
Read more
Report abuse

Jonathan A. Colvin
3.0 out of 5 stars Beautiful writing but slow .. so very slow
Reviewed in Canada 🇨🇦 on December 24, 2021
Verified Purchase
Great prose, but the story itself is slow, slow, slow. It takes till almost a quarter of the way through before anything much happens. And then plenty of banal diversions that don't much serve to move the story along. Some will like this meandering. But I didn't.
Read more
Report abuse
See all reviews