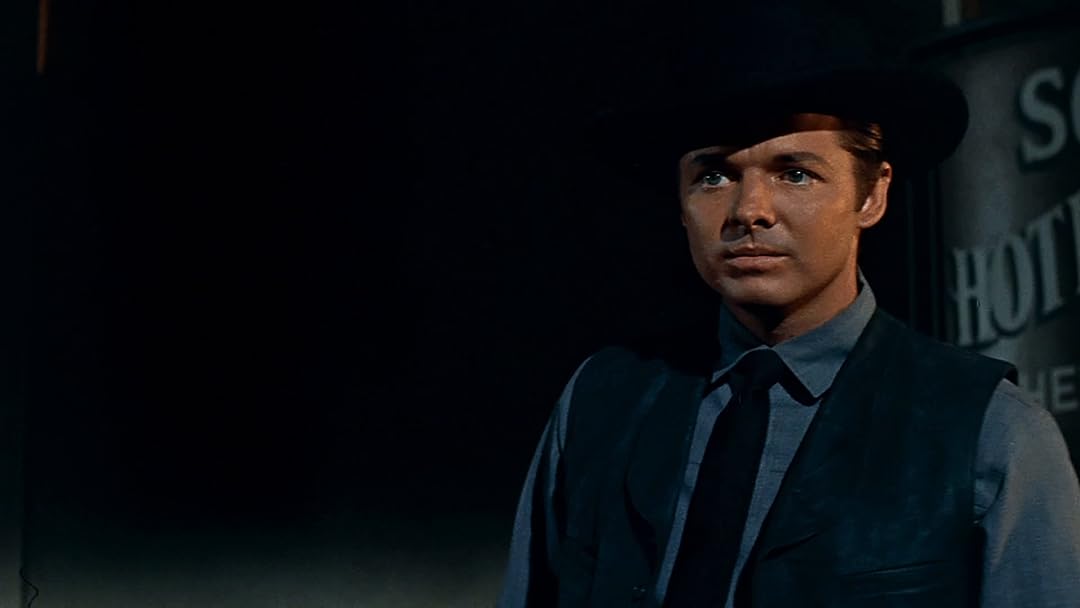 No Name on the Bullet

Gregory EspinozaReviewed in the United States on November 30, 2020
4.0 out of 5 stars
No Name On The Bullet is one of Audie Murphy's best1
Verified purchase
"I like you, Physician. You're like me. You and I may well be the only two honest men in town."
"Don't compare us. We've got nothing in common."
"Everybody dies."

Been on an Audie Murphy kick lately. Watched The Red Badge Of Courage (which I'll talk about later) and this 1959 film, No Name On The Bullet, which has been sitting in my "to view" pile for a while. Directed by the great Jack Arnold, with a screenplay by Gene L. Coon (the other Gene, from Star Trek). The two previously worked together on the 1958 Jeff Chandler/Orson Welles film, Man In The Shadow.

Murphy plays a mysterious hired gunman, John Gant, who rides into town to kill an unknown target. His method is to provoke his victim into a fight, shooting first, so Gant never gets arrested for a killing. Gant bides his time, calmly drinking coffee and playing chess with the town doctor (Charles Drake), and waiting. In the meantime, the town starts to unravel and prominent (but unscrupulous) citizens become paranoid wondering if Gant was hired to kill them, turning on each other.

Murphy is very good in this part, one of his best, as a cool hired killer who prefers playing chess, drinking his coffee, and discussing his philosophies on death and justice to the doctor, who finds the killer rather likable. Charles Drake always struck me as someone who played weak-willed characters throughout his career, but he's okay as the doctor. He was good friends with Murphy offscreen and co-starred in a number of Murphy's films.
The rest of the cast is filled by reliable character actors such as R.G. Armstrong, Warren Stevens, Willis Bouchey, Virginia Grey, Karl Swenson, Whit Bissell, and (a young Pre-Untouchables/Dick Van Dyke Show) Jerry Paris.
Drake, Stevens, and Bissell all appeared on Star Trek.

Jack Arnold is best known for his science fiction classics, It Came From Outer Space, Creature from The Black Lagoon, Tarantula, and The Incredible Shrinking Man, but was quite versatile, doing many types of films, and later, a lot of television, most prominently, Gilligan's Island.

AmericanCitizenReviewed in the United States on March 25, 2016
5.0 out of 5 stars
Definitely worth watching
Verified purchase
Wow, a very different role for Audie. This is less a western than it is a psychological film. Interestingly enough, this role was not too different from Audie himself. I read a biography of him some years ago, and the author called him "a killing machine". He was the most decorated soldier of WWII, and had a difficult time transitioning back to civilian life. So many other reviewers have done a terrific job of talking about the movie, so I won't repeat that here. But this is a move that is well worth watching. We watched it as a family movie and were kept guessing as to who the intended target was. A brilliant film.
17 people found this helpful

J. CanfieldReviewed in the United States on June 22, 2021
5.0 out of 5 stars
A film for Audie Murphy fans
Verified purchase
I enjoyed watching the movie. There are several familiar actors. This is an unusual plot for a western because it is sort of a psychological thriller rather than a good guy vs bad guy. Audie Murphy plays John Giant who has been hired by people to kill someone in the town of Lordsburg Arizona. He is so nice, polite and boyish that it doesn’t seem possible he is a hired killer, but he eventually confirms he is there to kill.

The tension builds as people speculate and panic over who will be killed. There are fights and shootings among town folks who are afraid. Eventually we find out who is the target and why. John Grant believes he kills people who should be killed and does so calmly and without passion. If you like Audie Murphy you will like this movie.

Jeff SmithReviewed in the United States on January 28, 2002
5.0 out of 5 stars
A splendid performance by Murphy!!!
Verified purchase
Everyone always talks about Audie Murphy's baby face and his slight build. But take a close look at his eyes. He was a cold-eyed individual, brought about largely by his 2 years in combat and subsequently suffering from Post Traumatic Stress Syndrome. If he had been born during the Old West times, he would have been a killer. "No Name on the Bullet" personifies Murphy's personality had he lived during those times.
Murphy gives a splendid performance as John Gant, a hired killer whose presence in Lordsburg causes total chaos, even though he does nothing at first - just sitting around drinking coffee and playing chess with the local physician.
Murphy's facial expressions were great as he smugly looked around and watched the carnage his name and reputation created. The banker winds up killing himself (even though he wasn't Murphy's target), and another man in town tries to get drunk enough to have the courage to face Gant, who stares him down and sends him fleeing from the bar.
This was probably Murphy's finest performance outside of "To Hell and Back," when he was not really acting but working on raw emotion, adrenaline and painful memories of the war.
Even when the town bands together and comes to make him leave, Gant remains cold as ice and backs them down. He knew they could kill him, but the question was "How many could Gant kill before they killed him?" None of them were willing to die to get rid of Gant.
Charles Drake also delivered a great performance as the physician opposite Murphy's character. While the entire town was in panic and chaos, wondering who Gant had come for, Drake calmly plays a game of chess with the gunman, trying to get inside his head and figure out what "makes him tick."
A suspenseful thriller with a minimum amount of violence, "No Name on the Bullet" comes highly recommended.
23 people found this helpful

Kindle CustomerReviewed in the United States on May 20, 2018
5.0 out of 5 stars
Best Audie Murphy movie ever
Verified purchase
My favorite Audie Murphy movie. He plays a bad guy but doesn't actually do anything bad. A different twist on an old western theme. Very entertaining.
3 people found this helpful

Don_DiegoReviewed in the United States on May 28, 2017
5.0 out of 5 stars
Gant. John Gant.
Verified purchase
Great quality of print. Love the widescreen. This is one of my favorites for Audie. He was such a likeable person, here he is a little creepy. But that's ok. The movie is funny, not sure if it is trying to be but it is. I love it though. Love Audie Murphy in just about anything, and Charles Drake is pleasant as well.
6 people found this helpful

D. R. SchryerReviewed in the United States on June 3, 2004
5.0 out of 5 stars
Don't miss this outstanding western.
Verified purchase
Audie Murphy was the most decorated soldier of World War II. After the war he got involved with movies -- predominantly westerns. Frankly, his films are highly variable in quality. Some are pretty bad B movies. But given a good script, good direction, and good supporting actors, Murphy turned in several surprisingly fine performances. No Name on the Bullet is a case in point. Murphy convincingly plays John Gant -- a cool, deceptively-likeable hired killer with a reputation for goading his intended victim into attempting to draw first so that Gant can always get off by claiming self defence. This movie is a study of the effect of Gant's arrival in a town on it's citizens. While Gant quietly drinks coffee in the hotel bar or plays chess with the local doctor, the town's leading citizens go to pieces because their secret guilts convince each of them that he is Gant's target. The finale of this tense psychological drama is surprising but not contrived. This is a very good western by any standard and probably Audie Murphy's best. I hope its availability on DVD will find it the wide audience which it richly deserves.
50 people found this helpful

peterfromkanataReviewed in the United States on June 21, 2004
4.0 out of 5 stars
Suspenseful Western
Verified purchase
As others reviewers have noted, 1959's "No Name on the Bullet" is far from being a typical Audie Murphy western. Under Jack Arnold's expert direction, the focus here is on suspense and tension, rather than action. When gunman John Gant rides into town, most of the local citizens are justifiably nervous. Gant is a hired killer, and he seldom visits a town just to see the sights. Much of the film revolves around the questions--why is he here ? Who is he after ? Which of the town's citizens will die ? Since Gant isn't the talkative type, the suspense keeps building, not to mention the nervous paranoia of the townfolk.
As Gant, Murphy delivers a chilling performance. You never doubt that, behind that baby face and modest build, is a man not to be crossed ( by all accounts, in real life, as well as in movies ). He is not intimidated by anyone, not even a hostile crowd who thinks that, by sheer numbers, it can scare him away. As the town's doctor who tries to befriend Gant, Charles Drake delivers a strong performance as he comes to realize that he cannot distract the killer from his purpose.
Other fine supporting actors further add to the quality of the film--Whit Bissell, Karl Swenson, Warren Stevens and Virginia Grey. Apart from one climactic scene with Mr. Murphy, leading lady, Joan Evans ( not to be confused with the popular comedienne ), has little to do but make coffee for her "man", Charles Drake.
I found the ending to be memorable, and--for those of you who like action--there is gunplay at certain crucial parts of the movie.
The DVD has beautiful colour, is widescreen and mono sound. The only extra is the original trailer.
Audie Murphy made a lot of westerns in the 1950s and 60s. "No Name on the Bullet" is not the most action-packed, but it is certainly one of the most interesting, and features one of his best perfomances. If he is not yet represented in your western DVD collection, this is an excellent title to start with.
78 people found this helpful
See all reviews
Back to top
Get to Know Us
Make Money with Us
Amazon Payment Products
Let Us Help You
EnglishChoose a language for shopping. United StatesChoose a country/region for shopping.
© 1996-2022, Amazon.com, Inc. or its affiliates