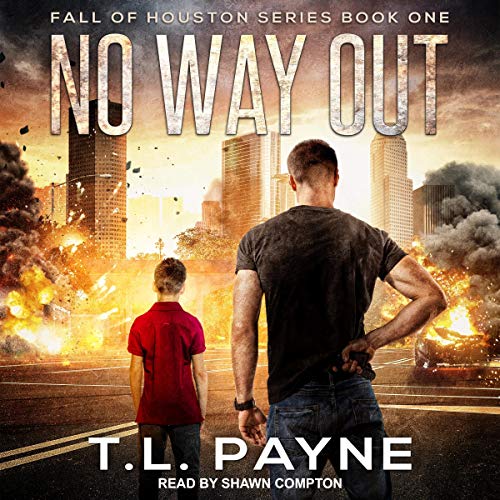 No Way Out: Fall of Houston Series, Book 1

An EMP attack leaves single-father Will Fontenot and his son stranded in Houston, Texas. It's an all-out battle for survival.

Wracked with guilt and struggling with PTSD from the accident that took his wife's life, he'll do whatever it takes to get his son out of the city. But an encounter with two injured women hurls them into a deadly game of cat and mouse and puts all their lives at risk.

It's a race against time as the plot to bring America to her knees unfolds in this fast-paced post-apocalyptic EMP-survival thriller.

4.3 out of 5 stars
4.3 out of 5
514 global ratings
How are ratings calculated?
To calculate the overall star rating and percentage breakdown by star, we don’t use a simple average. Instead, our system considers things like how recent a review is and if the reviewer bought the item on Amazon. It also analyzes reviews to verify trustworthiness.
Top reviews

sarah bailey
2.0 out of 5 stars Too many mistakes
Reviewed in the United States on December 4, 2020
Verified Purchase
I really like Paynes Days of Want series. I thought I would try some of the other series as well. I wish I hadn't. This book, as well as the first one in a different series and book 6 from Days of Want have terrible grammer, punctuation and spelling mistakes. Its like she didn't even proofread them. I wish this wasn't such a problem but I can't enjoy a book full of mistakes.
Read more
38 people found this helpful
Helpful
Report abuse

Shelley Walker
5.0 out of 5 stars Great start to a new series
Reviewed in the United States on November 30, 2020
Verified Purchase
Another first book of a series by T.L. Payne starts out just as great as all the others. I couldn’t put it down...only took me two days to read it. If you have read and liked T.L.s other series, you will most certainly like this one. Father and son, Will and Cayden, embark on their journey to get to Will’s sister, Savanah’s, farm after the flooding. Along the way he picks up two women, Kim and Isabella, who begin traveling with them. Will isn’t sure he can trust them, especially with his son. One of the women appears to be very secretive and Will’s not sure he can trust her. I loved the character of Isabella, who is shown to be very likable, especially by Cayden. The story also focuses on the relationship between Will and Cayden, which has been troubled in the past two years due to a car accident that killed Cayden’s mother. It will be interesting to see if this journey will bring them closer together. I can’t wait for the second book of the series to come out. Thank you, T.L., for a great start to a new series!
Read more
11 people found this helpful
Helpful
Report abuse

kd
5.0 out of 5 stars No Way Out
Reviewed in the United States on December 9, 2020
Verified Purchase
The first book (No way Out) is the start of a potential good series. Please note I have lived in Houston for 30+ years and looked forward to this specific series. First, the people in the book are interesting and story line is exciting. However, I would suggest noting in the story more landmarks or areas around Houston. I feel being more specific is good, its fun to recognize areas you know or have been to. Kudos for the areas you did include. I also thought there was way to much Will thinking back regarding his late wife. Dont mean to sound cold but it got redundant to me. I do like the idea of potential China invasion, I have read other EMP books and many do not think of or mention another country invading the US, after the EMP, which I would assume would really happen. Overall alittle disappointed, but still giving 5 stars knowing it takes a book or 2 to get into the depth of the story. I like your books and plan to read all you write for the series. Hope this help. KD
Read more
8 people found this helpful
Helpful
Report abuse

Avid Reader
5.0 out of 5 stars Another winner for T.L. Payne!
Reviewed in the United States on December 1, 2020
Verified Purchase
This first book of the new series, Fall of Houston, by T.L. Payne starts with action packed EMP events and introduces an element of intrigue early. Very much enjoyed the added element making this series a bit different than other EMP books I've read. Characters are interesting individually and also as a group. One aspect I particularly enjoyed was the humanity displayed in the storyline by the author. I need action and suspense in my reading selections and this book certainly filled that requirement! Now, to patiently wait for book number 2 in this series.
Read more
6 people found this helpful
Helpful
Report abuse

Rosemary R. King
2.0 out of 5 stars No Way Out
Reviewed in the United States on March 5, 2021
Verified Purchase
I have read several post EMP books and this one was just ho hum. Very limited and poor character development. I have no interest in following up with the other books.
Read more
6 people found this helpful
Helpful
Report abuse

Chevyboy
3.0 out of 5 stars Hurricane and EMP Attack All In One Day !
Reviewed in the United States on September 8, 2021
Verified Purchase
This story about two factions of two families caught in the dual catastrophe of a storm and a foreign military strike describes the struggle to simply survive and how young teens grow up quickly to aid their parents. Foreign intrigue enters in the 2nd half when an FBI Agent gets involved in their effort to survive. I gave 3 stars vs. 4 to this new series since one tragic event in the life of one family was referred to all too often. Otherwise, a fast paced drama and a good read.
Read more
One person found this helpful
Helpful
Report abuse

RLyons
5.0 out of 5 stars Great "Book 1"
Reviewed in the United States on March 8, 2021
Verified Purchase
Loved the book. Enjoyed the character development and the description of the chaos, BUT I am tired of these "Book 1" of a series which are priced reasonably at $2.99 and then Book 2 comes out priced at $4.99 - $5.99. (Book 2 of this series is $4.99) Since I read some of these in just a couple of days, I refuse to spend more than $3.99 for a KIndle book. Other than that, it was a very interesting book, but I guess I'll never find out how the series turns out.
Read more
Helpful
Report abuse

John Mullineaux
3.0 out of 5 stars Just ok
Reviewed in the United States on October 26, 2021
Verified Purchase
The protagonist made too many dumb mistakes and somehow survived. One in his party started out as a fragile snowflake and inexplicably morphed into a seasoned special forces fighter in a couple of chapters

Tom7737
2.0 out of 5 stars Not For Me
Reviewed in Canada on June 3, 2021
Verified Purchase
I found myself skipping bits hoping for the story to get past the storage facility. I finally gave up and went to look for something else to read.
Read more
Report abuse
See all reviews
Back to top
Get to Know Us
Make Money with Us
Amazon Payment Products
Let Us Help You
EnglishChoose a language for shopping. United StatesChoose a country/region for shopping.
© 1996-2021, Amazon.com, Inc. or its affiliates