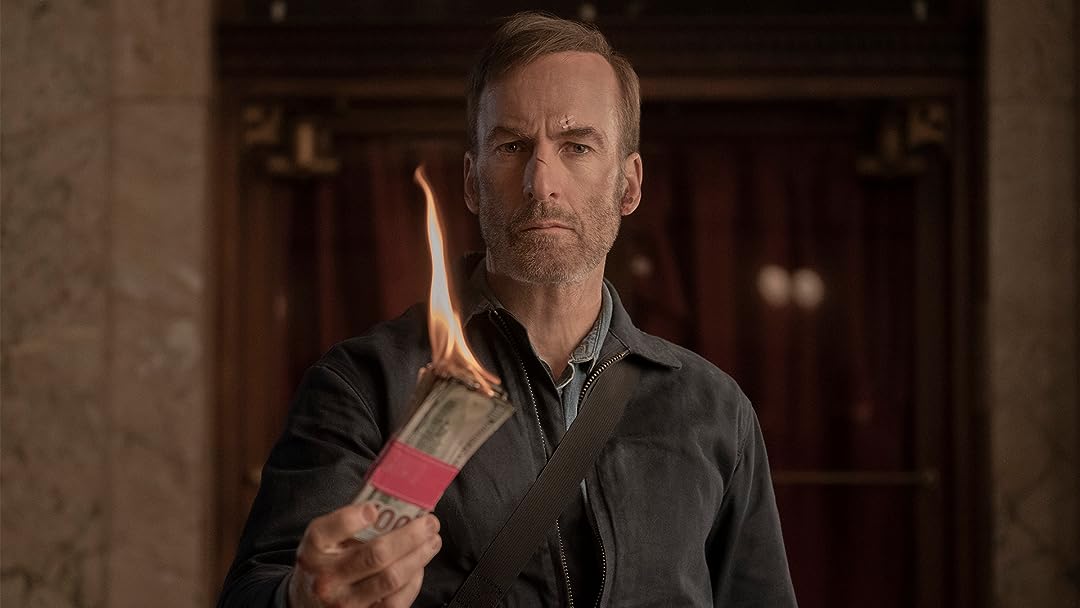 (82,523)
7.41 h 31 min2021X-RayHDRUHDR
After failing to fight for his family during a robbery, an unassuming father calls on skills from his hidden past to become a lethal vigilante blazing a wild ride to revenge.

H. BalaReviewed in the United States on March 28, 2022
5.0 out of 5 stars
"Gimme the g0ddamn kitty cat bracelet, motherfudger!" (But he didn't say motherfudger)
Verified purchase
Be careful how you roll up on somebody. Because you never know, son. The most innocuous person could be the most savage asskicker. That's this movie's imparted lesson. Me, I done no research going in. I dunno if Nobody resides in the John Wick universe. I do know some guy named Derek Kolstad wrote both franchises. Yes, I assume Nobody will be a franchise. It is that good and entertaining.

I'd heard of Bob Odenkirk, hadn't seen him in much. Hadn't seen Breaking Bad or Better Call Saul. I have peripheral knowledge that homie's a comic who can also do drama. Word of mouth had me stoked for Nobody. The red band trailer excited me.

I love underdog stories, except is this one really an underdog story? Odenkirk plays Hutch Mansell, a docile, middle-aged, ordinary guy whom nobody looks twice at. He holds it down on the daily with his normal dysfunctional family and a typical job and a father wasting away in a nursing home. But there's something a wee off about Hutch. Maybe he keeps a dark secret, maybe hides a sordid past. A home invasion one late evening unlocks something he'd kept repressed up for years and years, which is his old self. Because Hutch wasn't always just some ordinary guy.

And maybe his reawakening to that old violent self would've come anyway. The instant impression given is that Hutch is not content. Life's in a rut. He keeps forgetting to take out the trash. A barrier of pillows keeps him and his wife apart in bed. One of his kids is this sullen sort you wish you could just take your day out on, but maybe that's me projecting.

Picture a fella whom everybody now looks down on. If you'd seen the trailer, you know how he wimped out during the home invasion even as his teen son bravely tackled a trespasser. Thing is, it's not everyone's being all judgy at him that's bugging him most. Our boy needs an outlet for his pent-up sh--.

The genius of this movie conceit is its unique casting choice, obvs. Charles Bronson in Death Wish, Liam Neesen in Taken, even Michael Douglas in Falling Down - there'd been precedent with those actors, some predating history of their either already having played action hero or shown a bent for volatile performances. But you never saw Odenkirk doing this.

Give my man credit. Odenkirk trained arduously and did most of his stunts. He crushes the part. Unlike Seagal, Van Damme, Schwarzenegger, or even Keanu Reeves as John Wick, Odenkirk's middle-aged everyman makes you feel as if he is truly taking his share of lumps. In that sense, Hutch Mansell, with his weathered face and rumpled image, has more in common with the original Die Hard's John McClain than with those indomitable action heroes just mentioned.

They say comedians make some of the best actors. Odenkirk is an exceptional performer. There are moments in this movie when he is raw as he struggles to rein in the more violent, chaotic side of himself. But Hutch is also someone who years ago had craved normalcy and a family and so gave up his old life of "auditing." And even now he cherishes his hard-won normalcy and his dysfunctional suburban existence. My long-winded way of saying that Odenkirk brings a tattered humanity to the screen. I love that there's no bravado to him.

But we didn't sign on for suburban bliss and life lived in humdrum mediocrity. Cascading misadventures propel Hutch out of his 9 to 5 stupor and into a war with murderous Russian mobsters. I posit that everyone's favorite scene is the bus scene. It marks the moment in which Hutch finally fully lets loose his long-dormant persona that may be his most true character. When them Russian thugs got on the bus, yeah, yeah, it's clear that Hutch wanted all their smoke. And when Hutch locks his family in the basement as he sets out to repel a second wave of home invaders, and he tells his wife, "Don't call 911," c'mon, what's a more badass line?

I rate Nobody 6 out of 5 stars. Are there cracks in the movie? For sure. In a week's time, the flamboyant, karaoke-singing big bad fades in the memory banks. When you move past Odenkirk, there isn't much to the other characters, although Christopher Lloyd oozes awesomeness as Odenkirk's decrepit old dad with some surprises still stored up his sleeve. But the script doesn't give Connie Nielsen much of anything to do as Odenkirk's wife. My man "Ham" from V, Michael Ironside, is just flat-out wasted.

Throughout, I looked for clues that tied Nobody to John Wick's universe and found nothing concrete. Sure, Colin Salmon's elegant The Barber seems a character that could've hobnobbed with Wick. And secreting a hoard of gold in the household is a commonality Hutch shares with Wick. I have high hopes. Because it'd be a huge wrong if Hutch's bottled-up ex-auditor never meets up with Baba Yaga. In the meantime, I reckon I'll watch Nobody a heap more times, for Odenkirk's inspired unconventional turn and for the stylishly brutal action. This movie hits all the right places for me. To quote Hutch's dad as he takes in the bloodbath: "Just a bit excessive... but glorious."

Olli Reviewed in the United States on November 2, 2022
4.0 out of 5 stars
Better than John Wick? Maybe, and no.
Verified purchase
The first half and hour, 45 minutes had me absolutely gripped. We've all seen this genre - "ex-(insert special force branch) hell-bent on blah blah" etc etc etc and most of the time, we come out feeling, guess that was ok. Or with something really imaginative like Wick, ok yes that was fantastic.

That's how the beginning until half way this movie is. Just perfect. The buss fight - finally, a "realistic" fight where the protagonist takes some real damage. And all the little throw in nods ("stay behind yellow line" "press for stop") tell you this has a slightly lighter tone than Wick et al; the creators are self aware, not tone deaf, not trying too hard. Right?

The characterization is great. I buy the wife and kids, the coworkers and the peripheral necessary filler folks; it is SO EASY to take them for granted and write some light nonsense just to have them talk enough to justify their roles. Here, they're kind of believable and it makes a huge difference. The direction is competent and plants you to the seat from the "mundane life montage", telegraphing poop is about to hit the fan.

But when it gets to the final stages it degenerates just a hair. The obligatory (and why does it have to be obligatory in these films) classic car wrecking, then to the warehouse to fight an army of baddies. Now, fighting an army of baddies has been great every since Arnold and Stallone. But that the dad and the phone-tone informant just happen to be there to back him up - come on. That was a let down. You were going so smart and tight, and then the Deus ex machina arrives with all of its godlike power. Seriously, you could have carried the imagination a little further. Hence the extremely regretful reduction of a star.

Yet, I absolutely will watch the sequel.
One person found this helpful

moparviperReviewed in the United States on November 17, 2022
5.0 out of 5 stars
nice action adventure movie
Verified purchase
I wonder why it is that some critics write a review that just proves they did not watch the movie or at least did not pay attention to the movie because they let their prejudice influence what they said like I have seen with this movie ? This is an enjoyable movie if you like action adventure.
One person found this helpful

J to the DReviewed in the United States on October 20, 2022
5.0 out of 5 stars
Fantastic film, more of these please
Verified purchase
I knew this was from some of the folks responsible for John Wick. This is a nice tale of a family man pushed too far. I wont spoil the movie but it's action with a bit of humble realism. It's not like he instantly turns into an unstoppable force. There are moments where one could relate to the situation. I loved the dynamic with his little daughter and how she looked up to him no matter what. It was a lovely breath of fresh air to see a family in a movie once again without something awful happening.
2 people found this helpful

smkReviewed in the United States on November 21, 2022
5.0 out of 5 stars
great movie!!!
Verified purchase
If you like action in your movies. I highly recommend this one. It was entertaining with car wrecks and a lot of different ways to kill people. Have fun watching it.

joshuaReviewed in the United States on November 22, 2022
5.0 out of 5 stars
Way better than expected '
Verified purchase
With so many of these style action movies. (which I like them All) the plot and way this movie was done, made it unique and thrilling thee entire time.

Keith GuyReviewed in the United States on November 20, 2022
5.0 out of 5 stars
Awesome flick, period.
Verified purchase
I loved the whole thing, start to finish, and there's not a whole lot of movies I can say that about.

Billy Two Knives.Reviewed in the United States on November 15, 2022
5.0 out of 5 stars
Good action flick.
Verified purchase
Good action flick with some plot twists. Not for small children since there’s a lot of violence.
One person found this helpful
See all reviews
Back to top
Get to Know Us
Make Money with Us
Amazon Payment Products
Let Us Help You
EnglishChoose a language for shopping. United StatesChoose a country/region for shopping.
© 1996-2022, Amazon.com, Inc. or its affiliates